[easyazon_image asin=”B0051T484E” alt=”BKO: Bangkok Knockout” src=”http://ecx.images-amazon.com/images/I/51cVP58hn8L.jpg” align=”right” width=”300″ height=”369″] BKO: Bangkok Knockout is a kick-ass, multi-combat action film directed and choreographed by Panna Pittikrai. His film credits include Ong-Bak and Chocolate. This film is about “Team Fight Club,” who quickly find out that an opportunity to get to go make movies Hollywood changes into a fight for their lives. 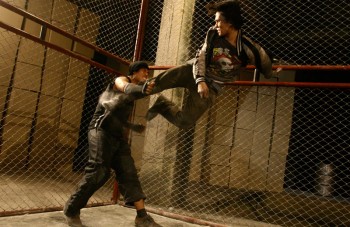 BKO: Bangkok Knockout isn’t one of those films that are engaging for it’s incredible story. There simply just isn’t one. Well, there is somewhat of a story: a group of “fight club” friends are competing against another team for an opportunity to star in a Hollywood film. There is a little bit of a romance mixed in there too. Trust me, you will not watch BKO for the story. You will watch this film for the multiple fighting disciplines—Muay Thai, Capoeira, Kung Fu, Tai Chi—a feast for the eyes—all in a fury in a convenient 1 hour and 50 minutes.

A group of martial arts students attending a reunion of sorts. They are drugged, and wake up in a warehouse that serves as a platform for an underground deathtrap. Our “fight club” is in a battle not only to save their lives, but the lives of one of the ‘fight club’ members mother and key love interest. If they hope to survive this ordeal, friendship is key. The ‘death match’ event was set up by a cigar smoking American business man, who will use this opportunity to host a few big-time spenders betting on who will survive each match. It would be also important to note, that “team fight-club” is set up against a deadly group of assassin’s, a cross-dresser, and a team of Friday the 13th Jason’esq, axe wielding, near indestructible, man-things. Yup. That’s pretty much what the entire story is all about. 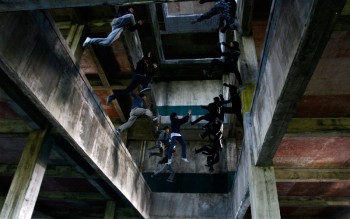 Now for the juicy bits. BKO is worth it alone for the action. The stunts are some of the best in the industry—cage fighting, multiple combat platforms, under 18-wheelers, on walls—BKO features endless punching, stomping, board bashing across skulls, kicking—it is amazing that there was so much fighting going on that it was near dizzying! I had to re-watch a few of the fight scenes just so I can focus in on one fight at a time! What I truly enjoyed that there were a couple stunt women also in the film and held their own against some of the most brutal of the assassins in the film, as well as handled all of their own stunts!  This hard-hitting and grizzled feature is certain not to leave any fan of mixed martial arts dissatisfied. 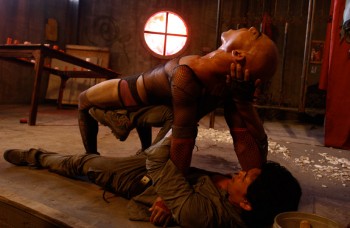 What you see in BKO is real. The stunt men and women are the real actors/fighters in the film. You will just have to look pass the poor story, and terrible dialogue and trade it for the great head pounding action you will watch. But the best part about this DVD are what’s included in the special features. The special features include explosive bonus content: The Making of BKO: Bangkok Knockout that contains interviews with members of the cast and crew. A great bit of content there and truly engaging and worthwhile to watch. It will show you just how difficult it was to create the difficult and dangerous fights scenes in the film. People were really hurt during the making of this film. The behind the scenes footage is pretty much a continuation of awesome with more footage of the actors and stunt sequences performed in the film.

Overall, this film is perfect one to feature on a Friday night.