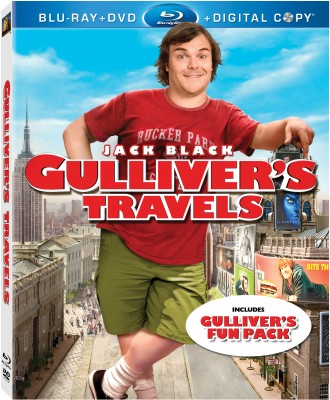 Well, Gulliver’s lackadaisical attitude costs him to lose his job as mail-room supervisor– well rather, downgraded, to just your average mail-room clerk—to his newly hired mail-room employee in just two days. Now, he is in the position to tell Gulliver to be motivated and aspire to bigger and better things.

He decides to take his supervisor’s advice, and apply for a job as a travel writer—and to impress his long-time crush, Darcy (Peet), he cuts and pastes content from a travel website, conveniently titles it “Gulliver’s Travels,” and hands it in–even if this means having to plagiarize his skills. As a result, he get’s the job and Gulliver eventually winds up shipwrecked on the fantastical island of Lilliput. I can go on to tell you all about how impressed the Lilliputians were with Gulliver, and how his enormous size saved the Kingdom. This, my friends, is where I have to stop embellishing you with Gulliver’s misadventures that unfortunately, misappropriately projects him into the role of a hero.

The film was filled with pointless opportunities for Gulliver to elevate his mundane importance in the real world of Manhattan—where he reigned as king, survived the Titanic, and he even spoofs on the movie Avatar. However, you would just have to appreciate Jack Black’s performance. He is great in the film, this is what he does best; trying to make people laugh. Unfortunately, this film limits the capabilities of this truly gifted comedic actor and his performance seemed like nothing more than him being, again, typecast as the overly excitable, loveable funny guy.

Family film? Good for momentary, cheap laughs. The rest, yeah well, I think you may have trouble keeping your kids entertained with this one.