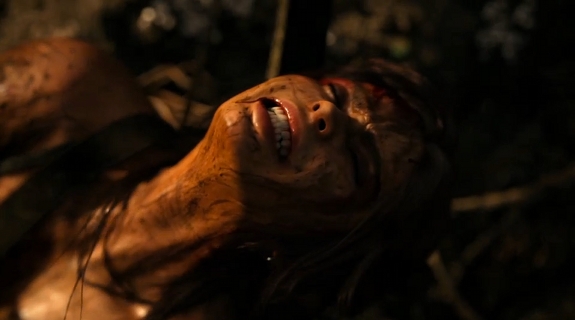 I know some people may be wondering why I’m describing the new and improved Laura Croft as the real deal and, well, after watching the developer demo from E3, she’s as real for me as ever! The E3 demo of Tomb Raider playthrough revealed, not only the awesome new game mechanics, Laura screams, sweats, and bleeds, and when she’s hurt, you know it. Not only is she in a literal fight for survival, but she prepares you to become absolutely breathless for the Crystal Dynamics NEW VISION for Tomb Raider and Laura Croft!

Not only are the new gameplay dynamics extreme and intense, what is also seen in the demo is the phenomenal depth of environment, and all of the possible ways Laura can use every aspect of it.

“On her first adventure, Laura is shipwrecked by a massive storm. She finds herself held captive on a mysterious island and has to use her survival instincts in order to escape.”

Laura awakes to find herself dangling from the ceiling from some strange cave. All she realizes is that she is in pain, a dead body hangs next to her, and she has to get out of there. So she swings herself and the body next to her’s casing catches on fire, she plummets and hits the floor of the cave—hard. You almost grimace in pain as she removes a piece of rubble from within her side. Now, she runs—panicked, bleeding, and in pain—trying to figure out a way to get out of there. I liked that she is vocal—giving herself mental support, moaning and wincing from pain–she does a lot of moaning. So, um, I would turn down the sound a bit at first, and gradually raise it, so you don’t “alarm” those nearby..*ehem*

Scheduled to be released in the Fall 2012 – Pre-order is available NOW!