My friends over at XenonProject.com were kind enough to send me a Syma S107G R/C Helicopter to play with and review here on DragonBlogger.com.  Now my kids had an R/C helicopter from a few years ago but it was the kind where the body was made out of cheap foam and it though it flew it just wasn’t that cool.

The Syma S107G Mini Gyro boy is really impressive looking all metal helicopter that just screams style.  The device comes completely ready to play out of box, just toss it on the charger for 35-40 minutes.  It can charge via USB on your computer, or the controller itself can plugin into the helicopter and charge it in about 40 minutes as well. 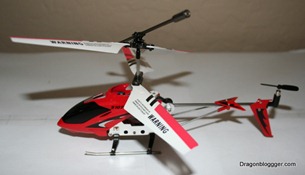 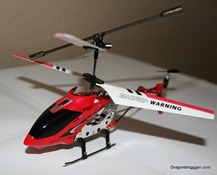 Though the box says for Ages 14+ my seven year old had no problems at all figuring out how to control the helicopter while I tried to take photo’s of it hovering in the air.  The controller which has about 6 meter or (20′ range) uses the left stick to lift off and control height while the right stick controls turning or moving forward/backward.  At first you just want to spend a few minutes lifting and landing the helicopter in place. 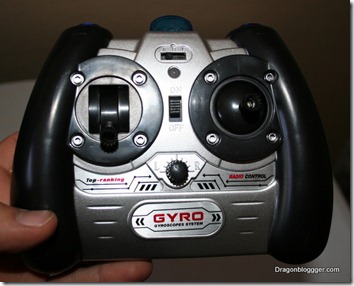 You start by pressing full throttle upward and watch it soar straight up, then you gently ease off the throttle and it will start to fall, if you drop off the throttle too fast it will just come crashing to the ground but the S107G is very sturdy and endured at least 40 crashes with walls, floors and ceiling fans without issue so far.

Here are some shots of the Syma S107G in action in my front room: 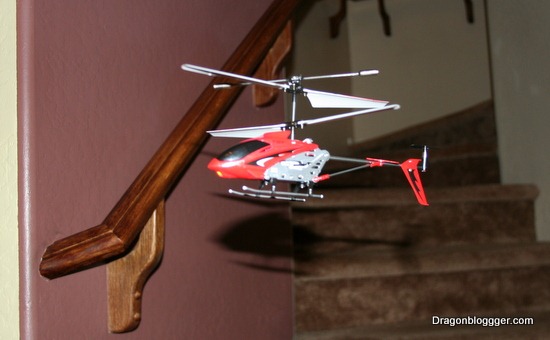 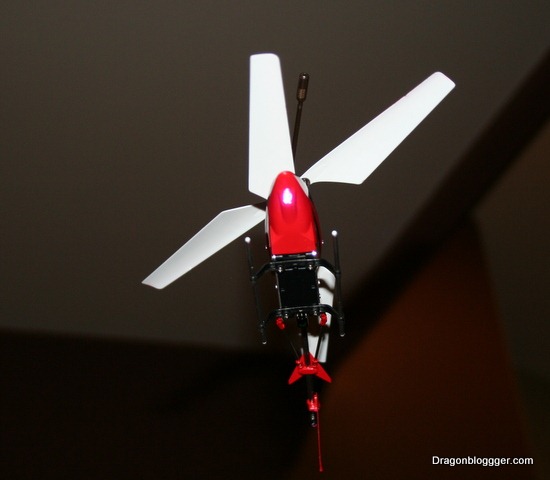 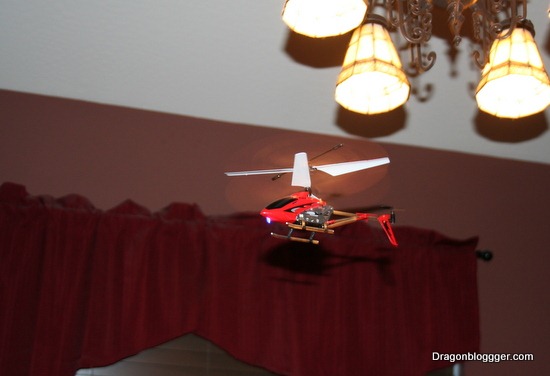 The helicopter had my kids literally fighting over whose turn it is and my 4 year old just couldn’t get enough of watching or taking turns launching it in the air though he caused the helicopter to crash land more often than not.

My only complaint with any R/C Helicopter is that it does take about 35-40 minutes to charge and you only get about 6 minutes of battery life on a 40 minute charge.  This is actually pretty good for this R/C Helicopter because my previous one took 3-4 hours to charge for 5-10 minutes of battery.  The kids can just charge it and when the red light blinks green on the controller, they know they can start playing with it again.

Now, XenonProject has great prices on R/C Helicopters and would you believe this Syma S107G Mini Gyro is only $24.99!  You can get it in Red, Yellow or Blue.

For just $19.99 you can get a really awesome S012 Mini Apache AH-64 R/C Helicopter too and this one claims to have a quick recharge of just 15 minutes!

I had a good time playing with the Syma S107G and my kids will continue to use it probably daily for the entire summer vacation.  They already want me to buy them each a separate one so they can go head to head and battle their helicopters against each other at some point.  Also, this isn’t just for kids I found myself playing with it just as much as them because I liked mastering how to make it hover and move around obstacles and avoid lights/fans in the ceiling.

If you need an R/C Helicopter, head on over to XenonProject and you will find something you will enjoy!