We are giving away the EasySMX Cool 2000 Gaming Headset, this is a review unit that was used for the purpose of the review and is being sent out.  I was sent 2 units because 1 unit box didn’t have a 3.5mm joiner like it was supposed to come with so instead of sending me just the joiner I was sent a 2nd headset.  I finished my review of the headset which it ends up being a decent headset as long as you don’t have a smaller head and figured I would run a giveaway for the complete set and include the Y joiner. 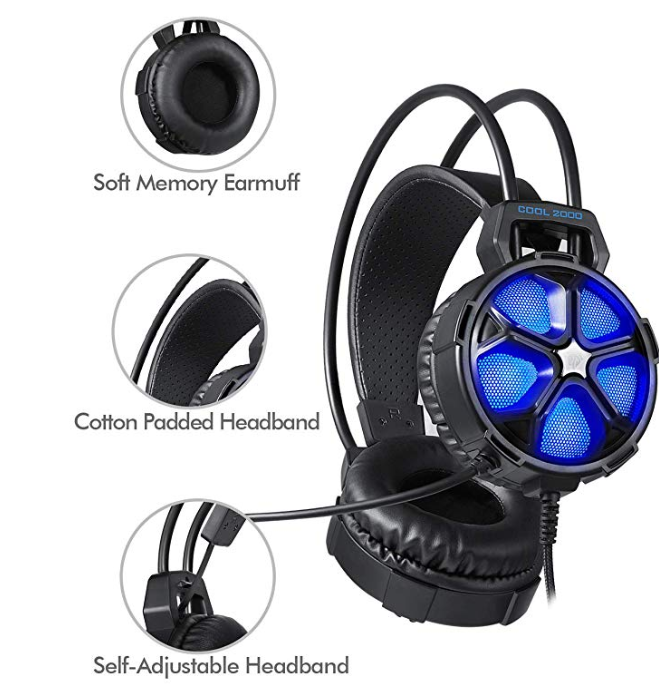 This is a 3.5mm headset that will work with any device you have practically including consoles (PS4, Xbox One, Switch) and PC, Mobile Devices (for games only), and more.  The 50mm drivers mean it has more kick and better sound than most 4omm driver gaming headsets and there is a noticeable difference to some of the cheaper models.  The mic is on a flexible want which holds it in proper place to where you set it next to your mouth which is better than some headsets I have reviewed.  The double headband has the stretchy flexing part which touches the top of your head and the plastic tubes for stability above that.  This means it doesn’t have the stress weakening points of the solid plastic headsets where they expand at the joints and can break while expanding.

My only minor complaint about this headset is the headset default and smallest setting is a little too large for my head and definitely too large for kids heads, so if you have a smaller headset the headset can slide down too low on the ears, you can compensate for this by wearing a hat and then putting the headset on however.  Still overall if you need a flexible headset that sounds decent and works with all the gadgets you have in your house then the EasySMX Cool 2000 isn’t a bad idea, though at retail it is a few more dollars than comparable headsets so it isn’t the best in class in my opinion, it gets a solid 7.5 out of 10 rating from me.