I was very excited to test this product and did not want to rush the results so I took my new EC Technology Bluetooth speaker on a road trip and I can say that it performed beautifully. 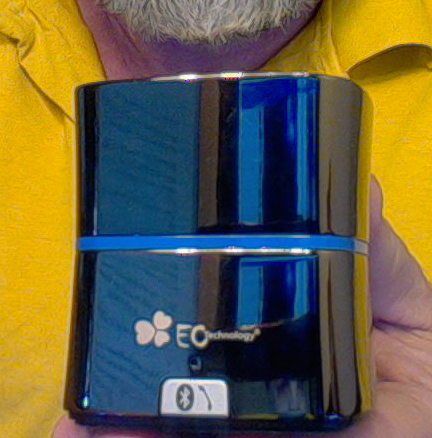 Aside from being elegant in its design, this Bluetooth speaker was easy for me to use, set up, and get started. This was one of the first Bluetooth devices I have gotten to test out speaker wise anyways, and I was not disappointed. As you can see from the picture, is not too big, and it is shiny. Always a great feature when selecting something you want to be seen with. Looks however are only one part of the puzzle to put together when making a decision like this. Sound is also important.

The web site says that this speaker has deep base. Other than car stereos and my home system with a big subwoofer, I am not sure what your opinion is concerning the term “deep base”? While I would not put this or any other handheld product into the same rankings as a system with a subwoofer attached, this speaker did not disappoint in that area either. I tried it on a number of different songs and was amazed at the range and clarity. What was really nice is that even at full volume on both the speaker and the playback unit; I did not have any cracking or distortion. I have tried other handheld and Bluetooth speakers that did not perform nearly as well. Also, what is equally of value is that this speaker does not need Bluetooth to be able to use it. I got just as great a result connecting it to my home PC, Kindle Fire, and my other devices that did have Bluetooth capabilities. I like that the makers of this product kept that in mind. 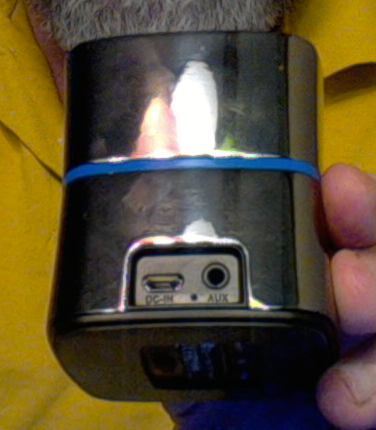 As with all products I have reviewed, there was one small disappointment that needed to be brought to anyone’s attention and that is the volume controls. They are not as quickly available as some might like seeing as they are on the bottom of the unit and in order to make use of them, you have to pick the speaker up, turn it over and press the buttons. I expected the power button or switch to be on the bottom but it would have been nice to have the volume controls on the sides. Yet even at that, it is a small inconvenience, and really does not affect the overall pleasure and performance of the product.

One feature that I wanted to test but could not fully test was the ability to do phone calls using the speaker. I did try it using the Magic Jack app I featured in another review, and while I could be heard on my home phone, there was a great deal of echo. I believe that was due to the closeness of my android phone to the house phone and the loudness of the speaker and the connection speeds I have been getting. The important thing is it worked. I would love to get your feedback on how well it worked for you.

I liked this speaker. I believe it is well worth the price and maybe even a bit more. It performed better than one my son has from another manufacturer, and it is smaller and lighter weight as well. While I do not agree that it has deep base, I will say that it has great base and high end response and everything in between is wonderful as well. You will not be disappointed with this product as I am sure it will perform just as great for you as it did for me.

I nearly forgot to tell you that this product uses the latest Bluetooth technology which means more than one Bluetooth enabled device can make use of this device at the same time, kind of cool. Anyways, hurry to the link provided, and order yours before they are all gone.