I spent many a night over the past week playing Elemental Kingdoms for iOS which is a new card based strategy game from publisher Perfect World Entertainment who is the same company that brought us The Secret World for the PC which is a fantastic horror themed MMO series.

Elemental Kingdoms is similar to Orions and Orions 2 but without any structure or base building, the game is all about collecting cards, leveling them up and improving your deck with powerful runes which have abilities that trigger under certain circumstances.

You start off at the main screen after signing in where you have access to the map which has campaign like missions which are just a short conversation between characters and a battle which at first is your tutorial and then goes into ever harder combats. The rewards gradually get better.  When I first took my snapshot of my card deck at level 3, I had only 1 star rating cards, there are 1 – 5 star rating cards, the higher the star rating indicates the rarity of the card and how much power it is likely to have. 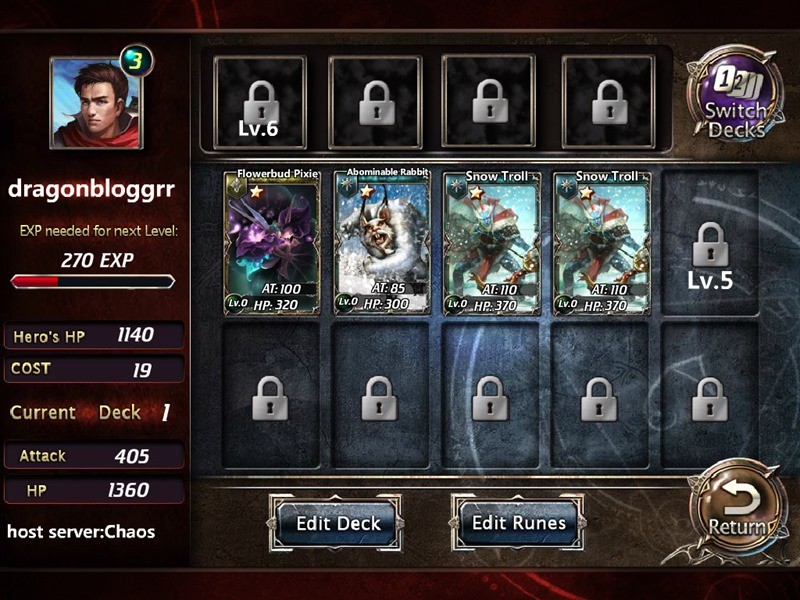 For those who are familiar with Magic the Gathering, there are elements for the cards which are similar but slightly different. Mountain = Fire, Glacier Mountain = Ice, Swamp, and Forest.

Each card has an attack rating and HP, it also will list the abilities the card has initially at level 0 and list any abilities it will gain at level 5 and/or level 10. 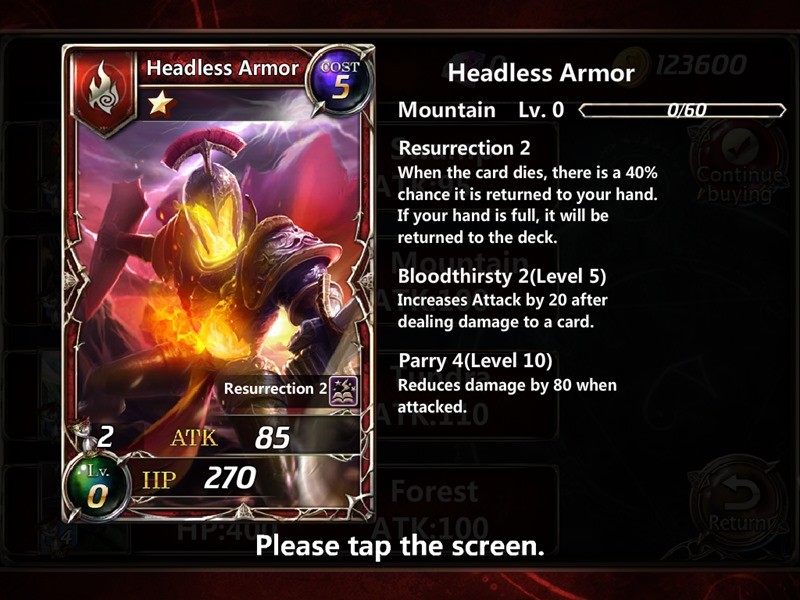 The Headless Armor above for example, has 85 attack, 270hp and if it dies it has a 40% chance of being resurrected at level 1.  If you enchant the card to level 5, it would also increase it’s attack by 20 each time it deals damage.

The cost at the top right of the card indicates how much it costs to put it in  your deck, you are assigned a certain amount of points which indicate how powerful a deck you can create.  So you won’t be able to throw all 3 or 4 star cards in your deck until way later, you have to leverage a combination of higher star cards and lower star cards until you can build stronger decks.

In Elemental Kingdoms the combat is very fast paced, but is only slightly manual, mostly it is automated and you watch the combat as it happens. 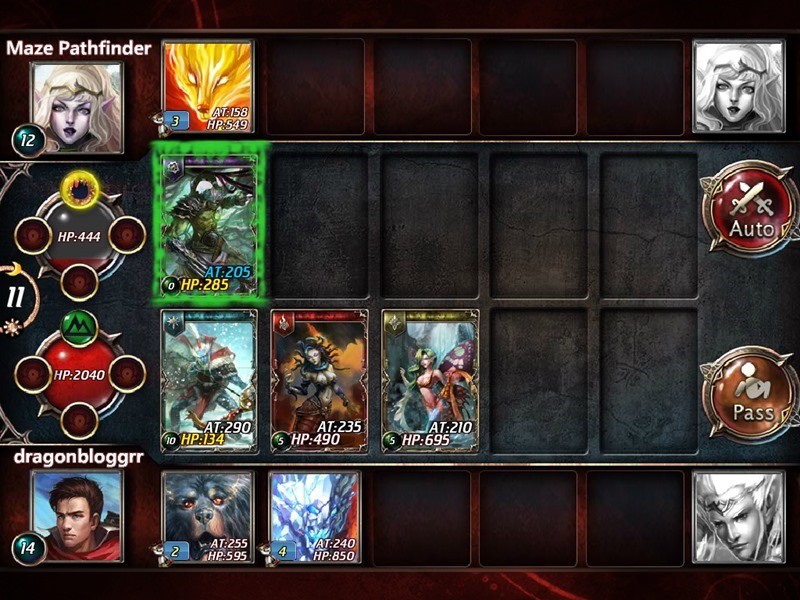 In combat there are turns, and each card has a count down until it can be played.  The turns count down automatically and in combats against the map you can manually click on which card you want to play when it becomes available.  Once cards are played the automatically deal any special abilities first, then attack.  Runes get triggered if you have any before the cards start resolving their abilities, though some cards have abilities which trigger the moment they are played and these get resolved first.

All PVP combat, Thief Combat, Demon Invasion Combat is automatic, as in you don’t even have the option to manually play a card, the entire combat is just watch and hope you win, but it is fun to watch the cards battle it out. 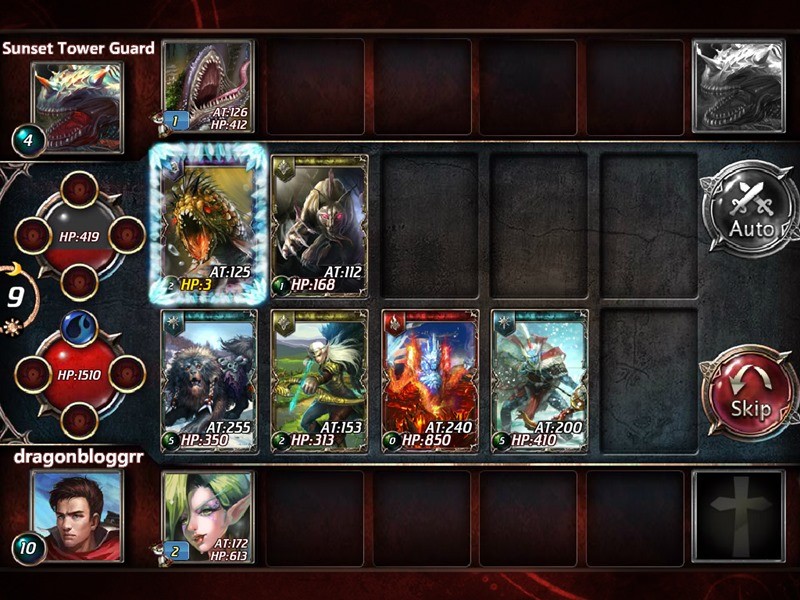 In the above battle the frozen card is unable to make any attacks on his turn, but special abilities still trigger even if a card is frozen.  Cards can be frozen, chained, shocked which all disable them from taking action.  Poisoned or cards that are on fire, suffer damage on each turn as well. 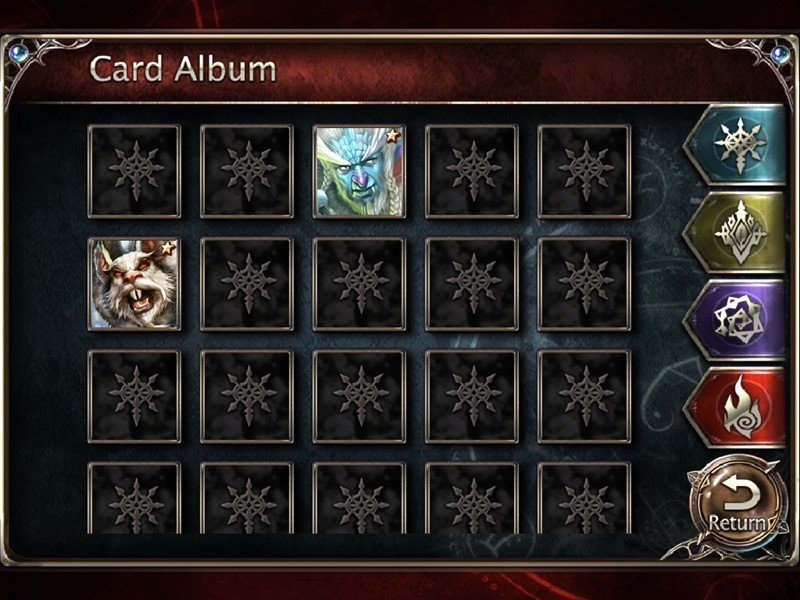 As you start collecting cards you will find your card album filling out nicely, which shows there are 250 cards in the game and it is expanding rapidly.  You get cards by winning battles on the map, and after exploring maps you can find a dungeon which you can enter and battle to find more cards and treasure. The dungeon is the only part where you get a hero to walk around by clicking on tiles and actually explore to find the treasure chests or creatures to fight. 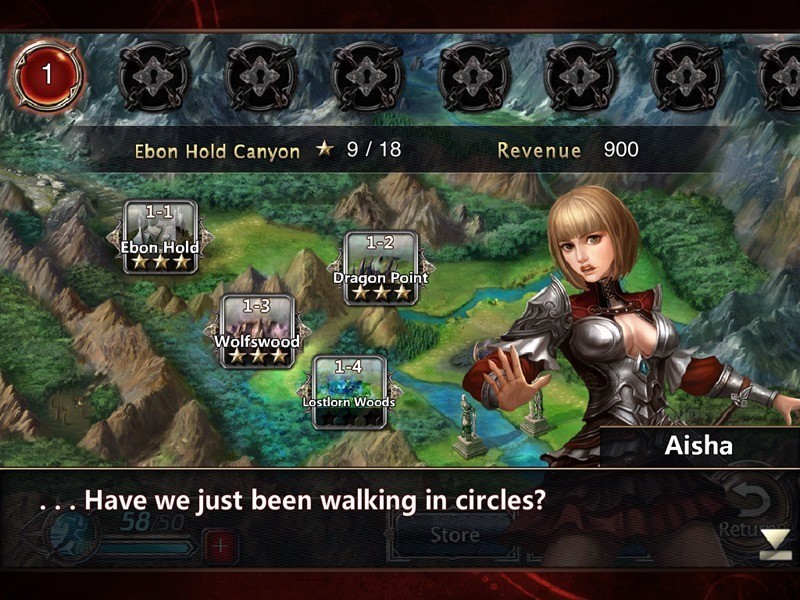 The story line dialogue is about as bad as any game I have ever seen, it is just boring, pointless and after reading a few sentences I mostly just skip past it.  I would have liked to have seen more tutorials or at least more of a purpose, villain cut sequences just to have some more fun with the setting, but really the talking scenes between maps is just pointless fluff. 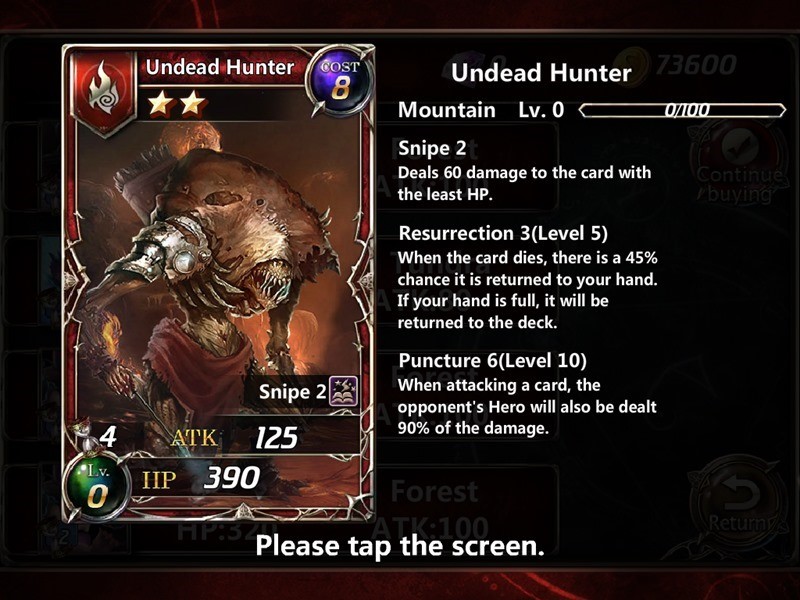 Eventually as you grow more powerful you will unlock runes and more card slots in your deck so you can hold more cards, runes are harder to find and you can unlock the Temple at level 21 which lets you pay to try to find new runes and rare Purple, Blue or Gold rune fragments which when saved up can be exchanged for rare runes which have a lot more power. 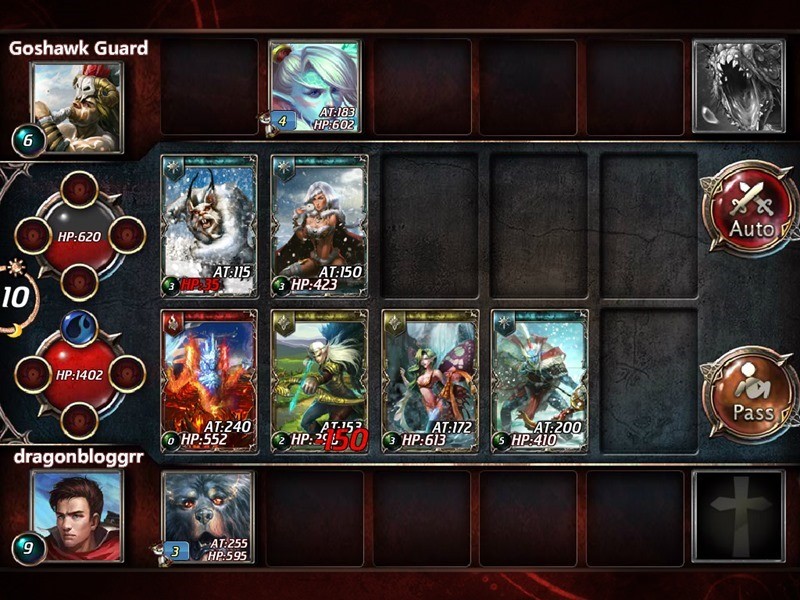 You can purchase new cards as well in several ways, gold is the easiest way and you collect it from battles, 10,000 gold will buy you a five pack of random cards which only range from 1 – 3 stars (very rarely get 3 star cards).  If you buy or acquire gems, you get cards from 2-5 stars (never seen a 5 star card yet) and you can buy more gems with real money, but you can earn hundreds from doing the daily rewards and events.

Finally you can get fire tokens as well from some events, and logging in daily gives you rewards as well.  These fire tokens when exchanged give you a level 3 – 5 card, so you get your highest odds and most powerful cards from trading in fire tokens.  You don’t get very many of these.

Enchanting Cards and Runes is how you upgrade them, you basically select the card you want to enchant (level up) and then you pick the material cards or runes.  You are basically consuming your unwanted cards, expending them and paying some gold to bring your favorite cards up levels so you can unlock their abilities. 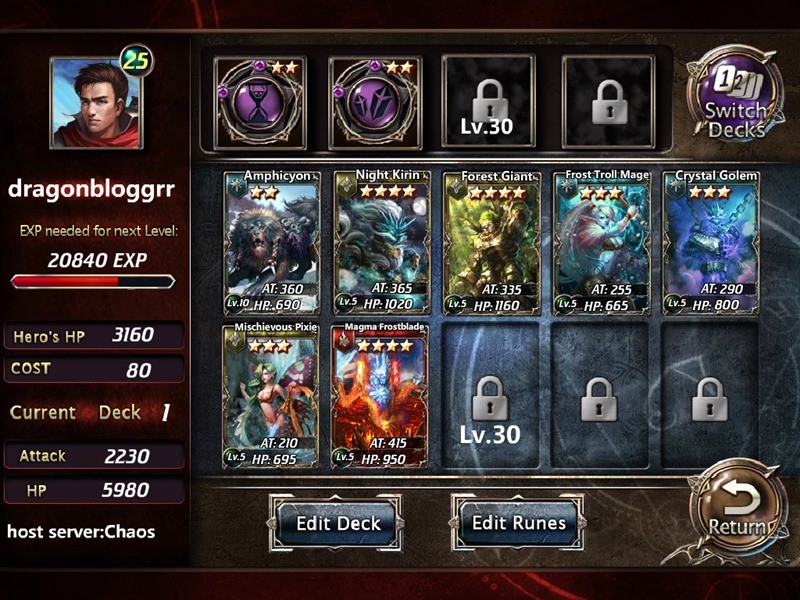 So by the time I wrote this article and after playing for about 6 days, I reached level 25 and have myself a pretty decent deck.  I gained over 200+ rank points in the PVP and having fun with the game.

Like many Free to Play games, this one gives you time limits to play, and you have to earn action points by waiting 10 minutes per action point or pay money to unlock more play time faster.  It is easy to consume money if you are impatient and I hate games that meter out time to play forcing you to either wait or pay to play, but this game is fun and it is enjoyable.  You can build a network of friends in the Social Button however, and I encourage you to do this because you can get up to 12 free action points per day by sending and claiming action points to friends.  This gives you 6 free bonus battles or map battles per day.

Also, PVP doesn’t cost action points and you can have 1 PVP match every 10 minutes.  After you finish a map point you can go back and explore it, which gives you instant XP and Gold and a chance to find a card without fighting a battle.  You also have a chance to find a thief which is a kind of boss battle, if you kill the thief you get 2 reward cards immediately after capturing him and your name goes on the thief capture board.  You can only attempt to capture 1 thief per hour.

Also note, 2x per day there are the Demon Invasions where a virtually indestructible demon appears, you fight it and can try to earn rank which gives you a ton of money, you can get 40k, 60k, 120k, 160k+ gold by gaining merits fighting the demon.  The trick is to find out which cards to use to do the most damage to the demon, not the player, you have to hit the demon.  You also gain bonus merit for using one or both of the merit cards listed in the demon profile, so you can gain extra merit quickly just by having those cards in the deck. Note you can’t win the demon battles, you will lose every time and can fight again every 1 – 3 minutes to gain more merit.  The battles go fast, the key is to try and get as many hits in as possible and I learned you often can’t get more than a single card to hit, so it is best to use your most powerful card and any merit cards only in your deck.  My trick is to put my strongest card in first slot, one that has a % chance to double it’s damage and I was able to get over 40,000+ merit last night for a 160,000 gold piece reward.  Note, that allowed me to buy 16 5 card decks which I used to upgrade 2 other cards to level 5.

So join me on Elemental Kingdoms on Facebook and send it to your mobile device so you can start playing. Enter my invitation code 44t3r4 and get a high level card so you hit the ground running with a powerful random card to help win some battles right off the bat!

And don’t forget to add Dragonbloggrr as a friend.