Once, every few years, a movie comes along that completely blows me away. It leaves me speechless and makes me question existence and my life in it. This movie raises something serious questions about where we’re heading and how we’ve gotten where we are today. That’s what Ex-Machina has done for me. It’s left me wanting so much more from the movie industry and for life in general.

It all started with the trailer. I saw it about three weeks before it came out and I was immediately intrigued. The premise was pretty simple. The head of a huge information gathering corporation, a genius in every sense of the word, believes he has created artificial intelligence. He holds a contest within his company and the winner gets to be flown out to his private compound. The contest winner’s sole responsibility is to question the A.I. and take part in the Turing Test. The Turing Test is a test for intelligence in a computer, requiring that a human being should be unable to distinguish the machine from another human being by using the replies to questions put to both. 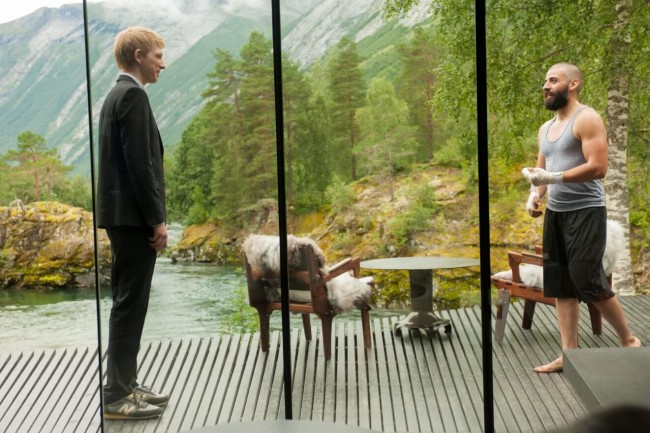 The movie starts out with Caleb (Domhnall Gleeson) getting a message stating he’s won a company contest. The company, the largest internet search engine, sends Caleb out to Nathan (Oscar Issac), the founder of this company, and his gigantic private mountain retreat. The contest, however, ends up being a means to set up a scientific experiment. Nathan reveals to Caleb that he has created the world’s first true artificial intelligence. This A.I. is in the form of a beautiful girl named Ava (Alicia Vikander). He has one week to ask her questions and figure out whether or not he’s talking to a robot that has been designed to solely interact with him or to the world’s first actual A.I.

The series of events that unfold take you on a beautiful, albeit tense and unnerving, journey. The architecture of the facility is simply stunning. Everything is voice-activated or remote controlled. To gain access to rooms you need a personalized keycard. It is also very secluded and you can definitely get the sense that Nathan is up to something that may not be exactly legal. The whole setting feels futuristic but, at the same time, plausible. None of the ideas put forth seem unrealistic. 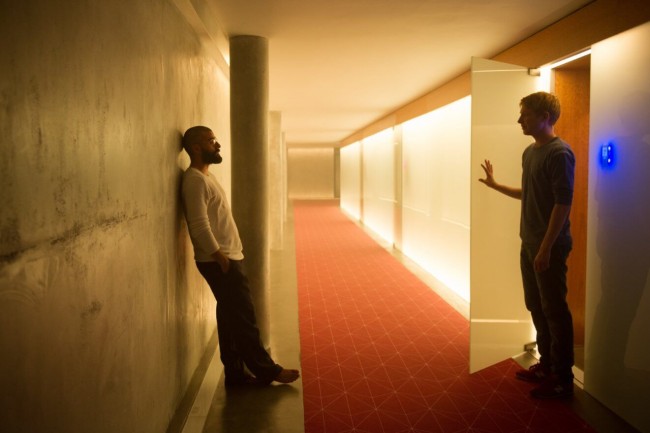 The acting is superb. Oscar Issac is intense and sometimes just downright scary. His portrayal of a CEO gone a little out of control with his pursuit of creating the worlds first A.I. is simply fantastic. I love the way his character convolutes some of the things Caleb says to him. Domhnall Gleeson is smooth and very clever. I really enjoy his work and I hope his career skyrockets from here. Alicia Vikander steals the show from both of them, however. She is stunning and I felt like she did a lot of research into this character. She was able to show warmth when her character needed it but also show she was a stone-cold killer if she had to be. Her manipulation towards the later part of the film is electric.

Before the ending even hit, which wasn’t exactly what I was expecting, I knew this was one of my top movies of the year as well as going down as one of my all time favorite films. From the secluded setting right down to the spectacular cast, Ex-Machina hits on all cylinders. While it’s not the most action-packed sci-fi movie to come out, the story is a complete work of art and fills in any slow part of the film with excellent dialog. The questions it makes you ask, from beginning to end, will linger with you for quite some time. If you haven’t seen this film, I highly recommend you do so as soon as you can. You won’t regret it.

All images are taken from (IMDB: Ex-Machina)