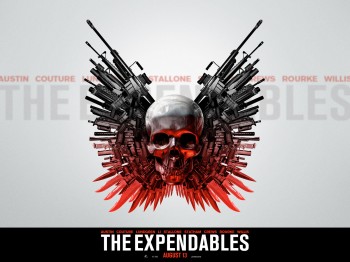 Heh heh heh!  Now here is a movie that knew exactly what it wanted to be and enjoyed every minute!  Or at least the writer, director, and probably the headline star did!  (for those who don’t know, it’s the same guy!)  Nowadays everyone talks about the latest torture-porn movie (‘Saw 25’ is the latest, right?).  When I was a teenager, our equivalent had one man facing armies…and winning.  They had body counts that reached the hundreds and explosions were measured on the Richter Scale!  They were action movies and we loved them.

I’m going to approach this review a bit differently because, frankly, this is a different kind of movie and a basic review really won’t do the job.   I’ll try to keep the spoilers down, but I’m assuming that most that will read this will  have already seen this already, and its not really a movie that relies on the plot twists anyway.  So instead of a normal review, I’m going to give a quick synopsis, list what I didn’t like about it, what I did like, and then a brief sum-up after.  So here we go!

For those who don’t remember the commercials and haven’t watched this, this is the movie that brought a bunch of famous and not-so-famous action movie stars all together.  We have Sly (I’m your worst nightmare) Stallone, Jet (HIIIIYA!) Li, Dolph (Yes, I played He-Man once) Lundgren, Jason (Yay!  I got a sub-plot!) Statham, among others.  It includes one of my old fave’s from the WWE Attitude Era, ‘Stone Cold’ Steve Austin, although if you don’t know him, you’ll probably miss him.  And, of course there are cameos that were revealed in the trailers and in one of the pics I’m posting!  The entire idea behind the movie is to honor the kind of mindless, testosterone injected action films of the 1980’s and 90’s, the kind with guns that never run out of bullets and big explosions.

1.  I had thought part of this movie was about aging adventurers having to deal with their age.  Well, they mention it once or twice, but then the guys run around like they are 20 year old Olympians at the games!

2.  There are too many guys to keep track of, and the script shows it.  Statham is really the only character to get any real sub-plot outside of the mission, and then the sub-plot seems so out of place it could be deleted and you couldn’t tell!  The others, including some of the villains, just don’t do enough or say enough for a viewer to really care about them.  Fewer characters with more to do would have solved this.

3.  They start several little sub-plots or running gags and then do not resolve them, almost like they forgot.   For instance, Jet Li is saved by Stallone several times throughout the film and mentions to Sly that he has to work harder than the others because he isn’t as big or strong as they are.  I’ve watched a lot of the old action movies, and this is a recurring thing that should conclude with Jet either saving Stallone at some point or at least doing something big based off his own skills.  Nope, actually Sly saves him again during the final battle.  Poor, weak, little Jet.

4.  The biggest thing, though, was the final battle.  Its not that it was too over-the-top and bad; they usually were.  Its just that, for a movie like this, we should want the ‘good guys’ to overcome the odds and beat the bad guys.  By the end of the movie, though, the soldiers our ‘heroes’ are fighting aren’t really being all that bad.  Their leader had a change of heart and was killed for it, and the ‘bad guy’ isn’t really in control of them!  Maybe I’m weird, but that took some of the fun out of the firefight.

5.  The fist fight scenes were done in this newer, choppy, extremely edited style that is popular right now, and I don’t like it.  Simple shots showing a well-choreographed brawl is so much better than constant edits that make it hard to follow just what is happening.   Say what you want about Star Wars: The Phantom Menace, but the lightsaber battle at the end rocks and most of it is just a great sword fight choreographed by the martial artist playing Darth Maul.  Maybe that’s just my preference and I’m too old fashioned.

6.  The ‘big meeting’ scene (you know which one) should have been longer and more meaningful.  Ok, now I’m nitpicking.

1.  The ‘Big Meeting’ scene:  Having Sly, Arnie, and Bruce all on one screen was pretty cool, and while I wish it had been more important to the overall story, it was still a nice little scene with some clever jokes (“He wants to be president.”).

2.  The movie overall isn’t TOO cheesy.  The cheese is there, of course, but the movie never really falls to constant nods in the fans’ directions or self-parody.  In fact, the ‘Big Meeting’ is the only scene entirely devoted to this kind of thing, and then they move on with the rest of the film.  Good work.

3.  I don’t know if it was Stallone or the other writers who have credit, but they really did reign in the plot holes, too.  There are some if you look for them, but they aren’t just gigantic like a giant lizard laying a thousand eggs in Madison Square Garden over a two- day time period without any damage being visible from the outside, even if they later show the lizard too big to even fit.  The Expendables has a simple plot to be sure, but they didn’t load it with problematic extras that pull you right out of your enjoyment.

4.  Of course, in this kind of movie, it’s the action that is most important, and this movie delivers.  In fact, as I watched the movie, I got the impression that the writers put there heads together and asked what kind of things had never been blown up in action movies before and set out to rectify that!   There are some really impressive set pieces throughout the film, and no action is copied or repeated later; each scene has its own statement and style right from the opening shot.

SUM UP:  I won’t tell you this is a great movie, but it is exactly what it claims to be and what they set out to make:  a retro-style actioner.  And where so many directors would have messed it up, Stallone did about as good a job as you can.   While it does have some problems, I ended up enjoying myself by the time it ended.  Anyone who likes those old action movies should like this and anyone who likes popcorn movies would probably eat this one up.  If you never liked these kinds of movies back then, though, you likely won’t enjoy this at all.  All I know is that I didn’t expect much from The Expendables and was pleasantly surprised.  I’d rate it 4 out of 5 stars, again not because its a great film but because it did exactly what it planned to and I enjoyed it.