I have been asked to review electric fly swatters before, they are a tech gadget that builds upon the traditional fly swatter and combines it with a bug zapper giving you a device that looks like a tennis racket that you can swing and shock flies to death with.  The previous one I reviewed pales in comparison to the entertainment that you can have with the Vintfun Game Swatter. 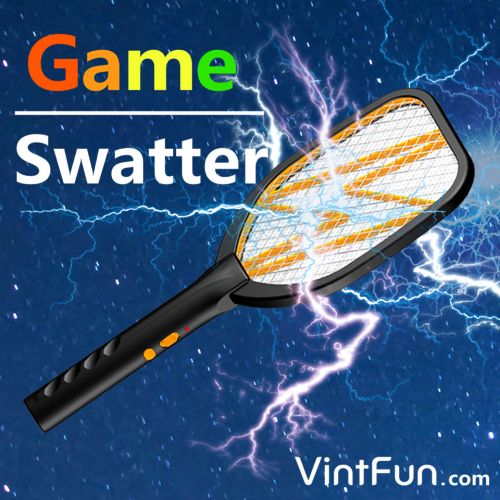 The Vintfun Game Swatter is a well designed electric bug swatter because it uses a trio of mesh screens that prevent any smaller flies from being able to slip through when swinging with dead on accuracy.  The game mode turns on and gives a loud sword “cling” when on and you hold the power button down and are ready to go.  There are a bunch of various game sounds and you get rewarded for being more accurate with multiple bugs in a row.  Just remember to hold the power button down and start swinging at flies.  One thing to note about this bug zap swatter is that it charges via Micro-USB instead of using batteries like some other models, this saves you the inconvenience at having to replace and buy new batteries when it runs out of charge but also means you have to take some time to charge it up when you first get it, but no worries you can get nearly a few charge in just an hour. 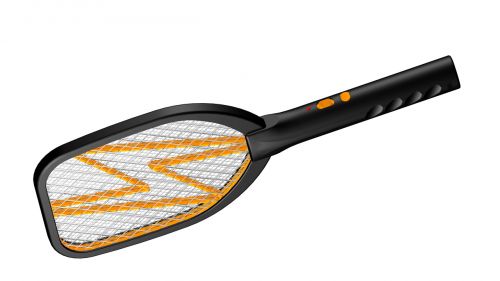 For those who need a little more quiet, you can switch the Vintfun fly swatter to ON instead of game mode and then it will just function as an electric swatter and zap bugs without making all the game sounds.  Remember to shut it off when not in use even though it won’t activate without holding the trigger button which is the lowest button on the handle (the horizontal oval one). 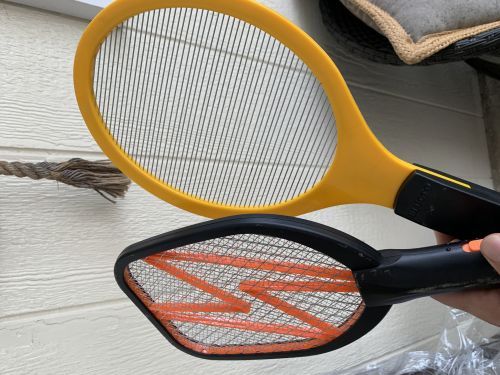 You can see when comparing 2 different electric fly swatters above the VintFun one which has the lightning bold and triple screen mesh is much batter at catching flies than the other model which has just horizontal lines that for some reason the small flies seem to fit through without being zapped occasionally.

This fly swatter by Vintfun packs a 1200mah 18650 battery and I have been using a single charge for more than 2 weeks now. It plugs in and charges via a micro USB port so you don’t have to deal with batteries. You switch to game mode or just on if you don’t want game mode and hold the button, it takes about a second or two for the swatter to charge and deliver the shock to kill nearly all bugs. Even mosquito hawks aka. crane flies are no match for this electric fly swatter.

If you need a fly swatter and want to make it into a game, then you will have a lot of fun with the Vintfun Game Swatter.  One thing to note, please make sure you don’t accidentally shock pets and don’t try to shock yourself.  Make sure if you let kids use the fly swatter the understand they can get hurt shocking themselves badly if they touch the metal screen while the device is activated.  Do not let little kids or pets touch the activated swatter.

Other than that warning, happy fly swatting.

You can buy the Vintfun Game Swatter at the Vintfun Online Store and use coupon code SUMMER to get 10% off.