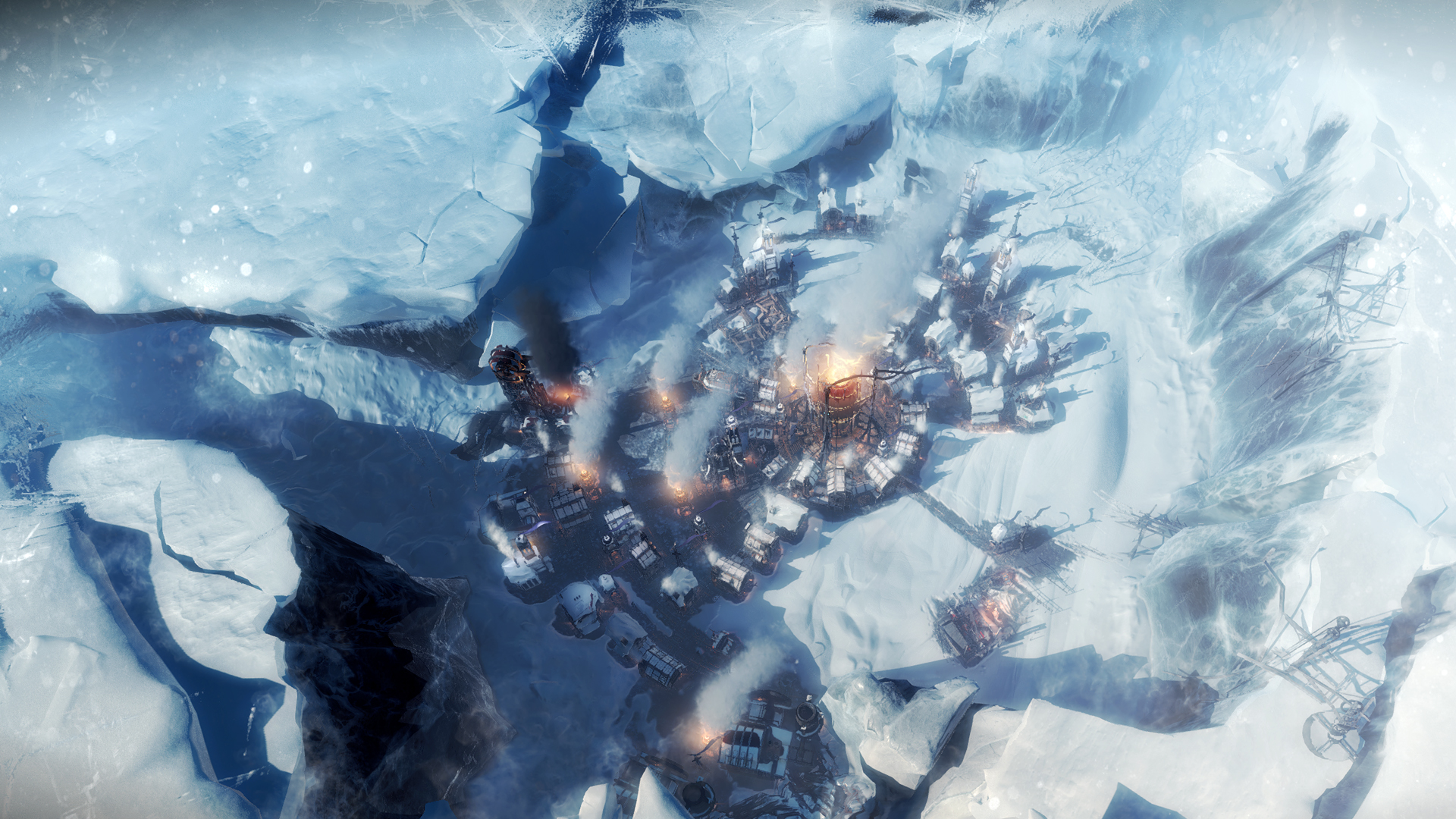 City building games in the RTS genre has seen a renaissance in recent years, with many more titles lined up for release in 2019. City building has generally taken the same vibe over the years. You build a civilization from the ground up, you collect resources, you move your way up the tech tree and you wage war with your neighbors, to win the game. Some city builder games choose a much peaceful route of trying to reach the pinnacle of civilization, the establishment of a utopia.

Now, here’s where Frospunk differentiates itself from the rest of the titles in the genre. Frostpunk is a city building game that revolves around survival, and only survival. Set at the turn of the 19th century, Frostpunk is about a world that has gone through a world-ending natural disaster, which brought down the great might of ice and snow that engulfs the entire planet with bone shattering temperatures that have greatly reduced the number of the surviving population, which now will be under your responsibility. 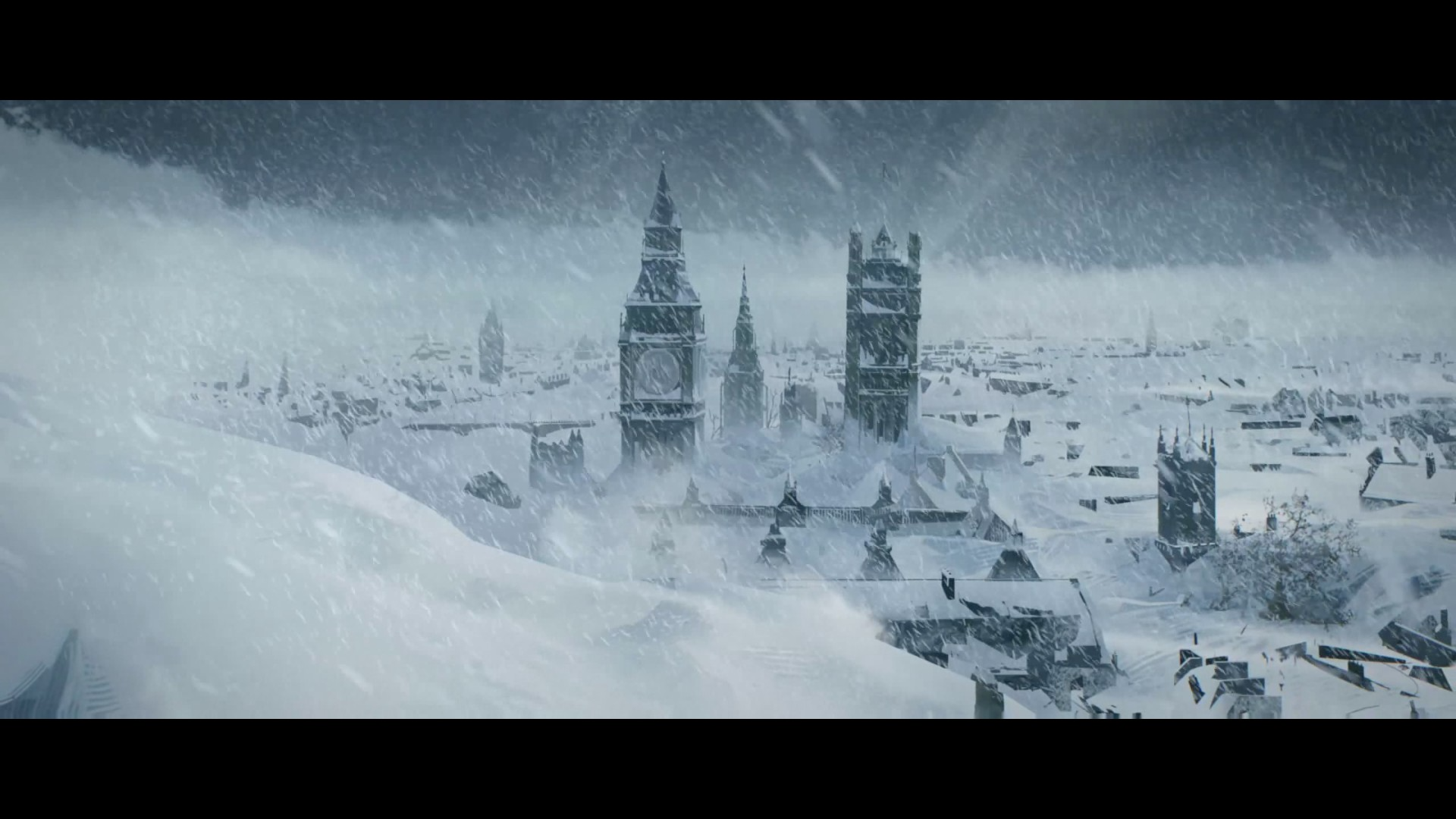 It begins bleakly as you uncover the in-game story intro that the world has been devastated by a never-ending winter where the cold temperatures have made most of the planet inhospitable. The population has been greatly reduced and resources are scarce. The only hope for survival revolves around the city of New London, where the massive heat bearing generators were built out of desperation for survival. Seemingly abandoned, you and the survivors start inhabiting the great structure in hopes of restarting any semblance of a normal life. 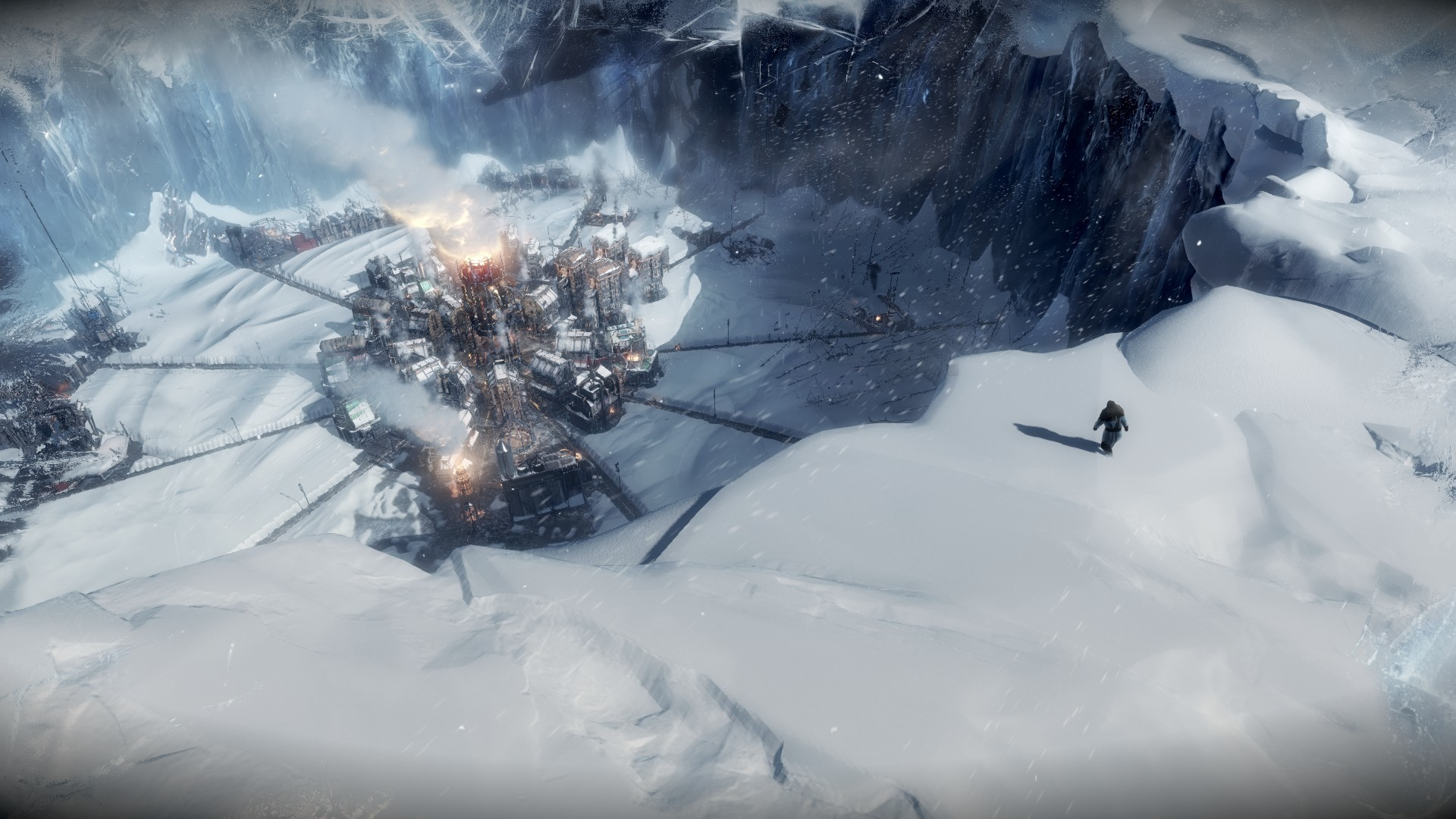 The giant heat generator seems to be built in a middle of a crater, which would probably help take the edge off the punishing temperatures during the day. Don’t even think about exploring at night unless you would like to see your colonist turned into a human popsicle. 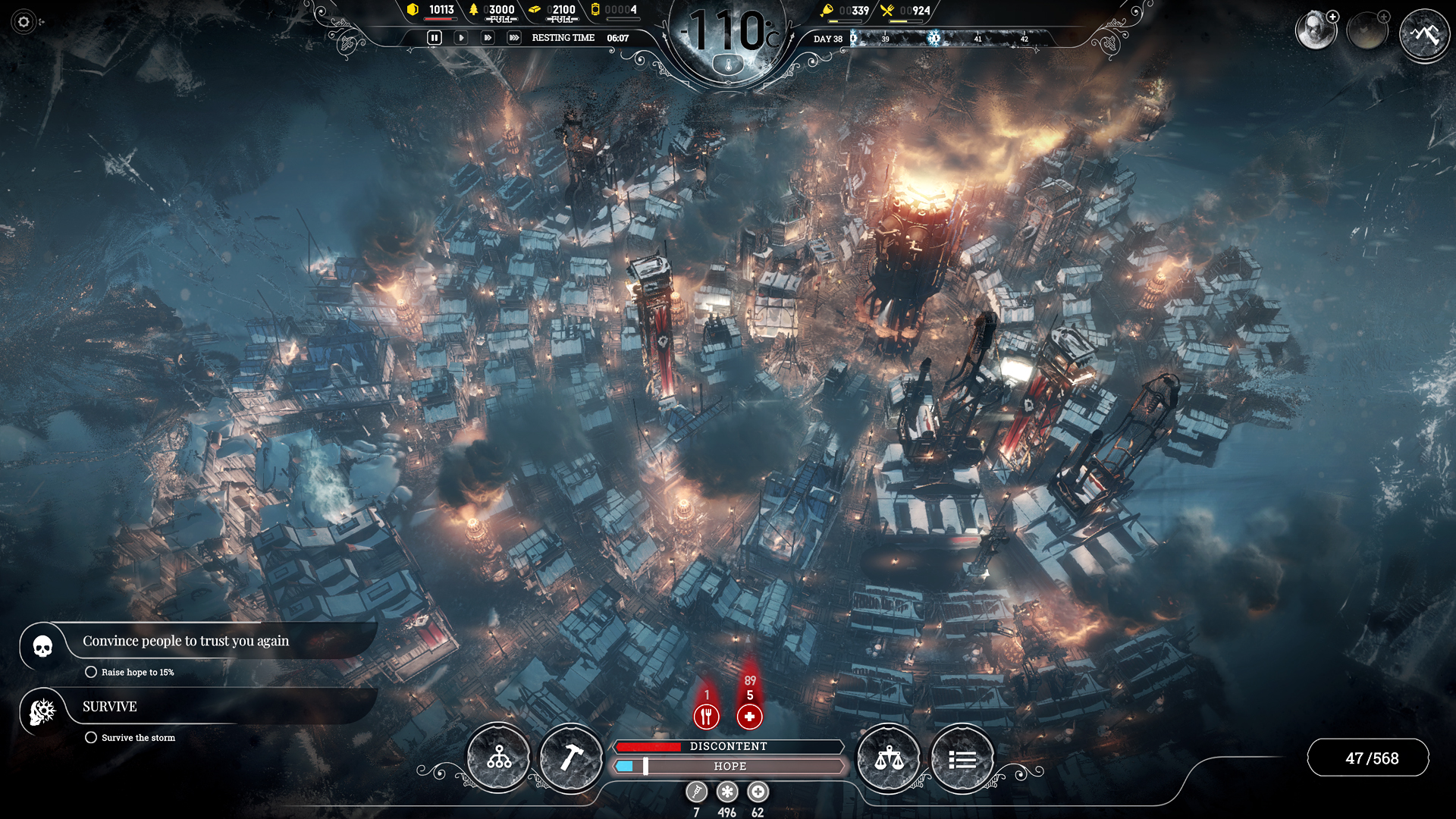 Set at the turn of the 19th century, the game has an overall Victorian steampunk vibe that brings about an interesting and unique looking structures and units. The lighting of units in an overall blue and dark color tone of the game gives the impression that there is life wherever the light resides. The snow and smoke particles that can be seen throughout the game also brings out a heavy and real atmosphere, making the game an immersive experience. Think the City of Zion from the Matrix but with winter. The snow trail and layer of snow generated in the game gives a much deeper depth into the gameplay.

The somber and tense musical pieces accent the game’s overall theme and bring out the despair and desperation that can be felt throughout the gameplay. Beautiful violin pieces to encapsulate sadness, wind chimes to define the lonely journey of the isolated, barely holding together society.

Like any other city builder games, resource gathering is a crucial aspect to ensure a smooth progress in the game. Collect resources such as coal, food, wood, iron, steam cores, and steel to upgrade buildings and keeping your colony alive. Choose which to prioritize carefully, as a radical decision on how the resources are to be spent will affect your gameplay on the later stage. 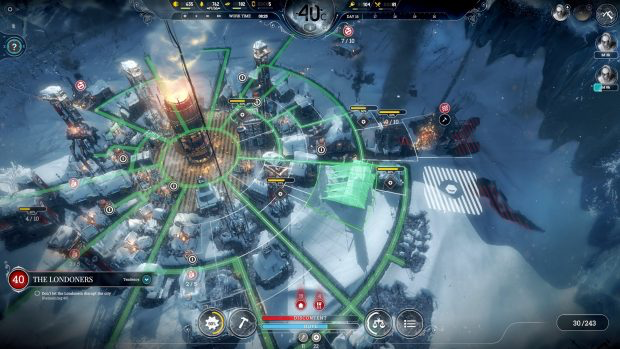 However, unlike other city builder games, which allow you to expand your city borders far and wide, Frostpunk focuses on allowing players to build around the circumference of the heat generator. Although some might have a problem with the limited playing game, FrostPunk tackles this problem by introducing an effective zoom function, as to show players on the actual scale of the city they’re building. 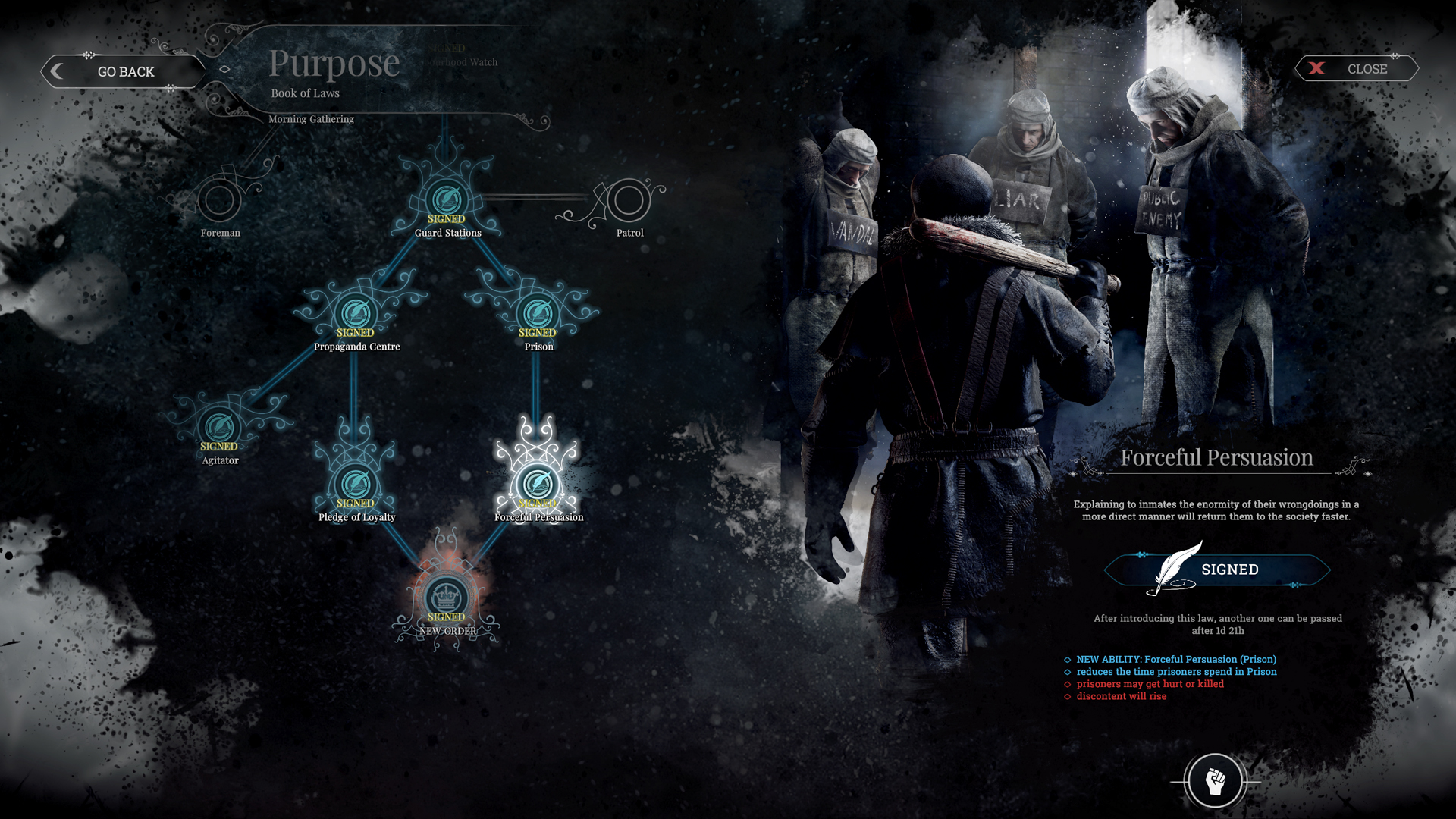 Aside from that, FrostPunk introduces another game mechanic to constantly test your decision-making abilities. Known as the Book of Law, players will be able to choose to enact special laws that will be enforced throughout the colony and each law has different perks.

But these perks also do come with negative consequences. Would you choose to enact child labor to increase productivity? Would you allow fighting pits for entertainment purposes? The choice is yours to make but remember: Choose wrongly, and the discontent amongst your colony will rise exponentially, leading towards your exile or execution. At this point, both scenarios bring about the end of the game for you. 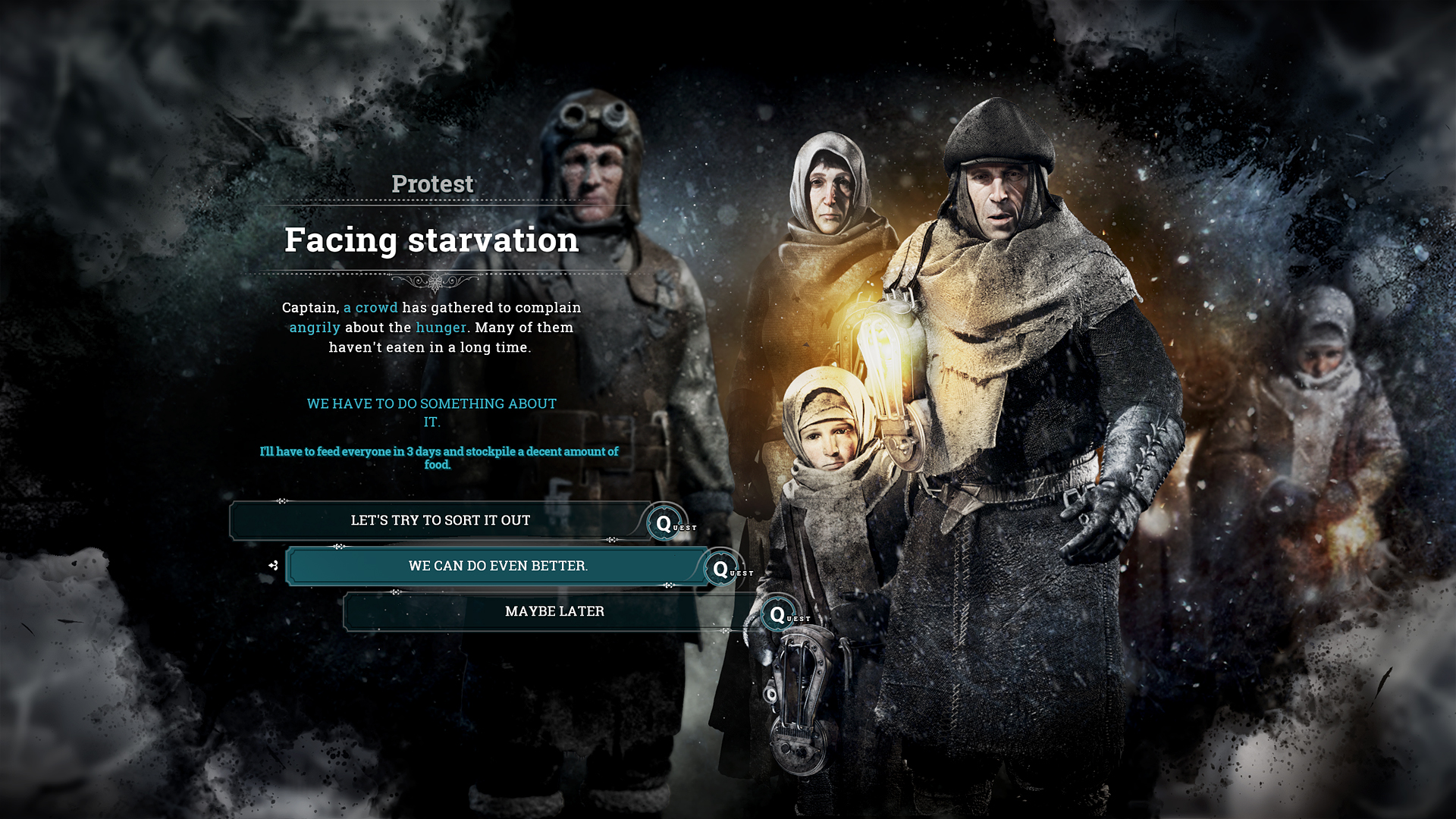 And to add another layer of decision making on the laws that you’ve decided to enact are the events triggered by said laws which in a way gives depth to the level of realism that can be experienced in the game. These events such as protests, push you further into making tough survival decisions that put the survival of the colony hanging by a thread. One wrong move from this point and you might not recover from the domino effect that spells doom for you. 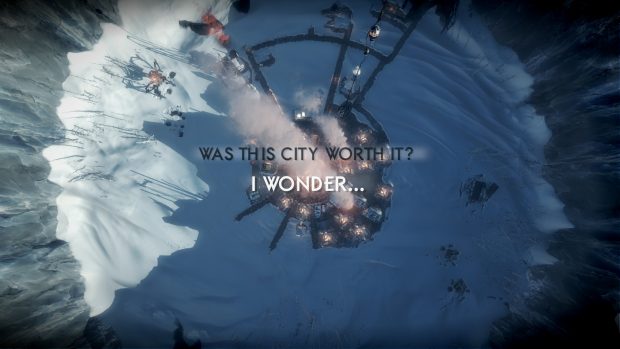 Frostpunk is a great addition to the revival of the RTS game genre and it is a welcome change. Frostpunk brought in a glimpse on the potential this genre has and it proves that RTS games do not need to stick to the old formula to make it a great gaming experience. Sure, the limited city expansion element and the singular total objective might bring about doubt to even the most hardcore RTS fans, but it makes sense being a survival city builder game. Limitations and dire situations are key components that make this game a great immersive experience.

If you enjoy RTS games with a twist, it’s time for you to refill your Steam Wallet and get the game today.The bone chilling experience that is felt throughout this game is definitely worth it.