Let’s settle down with one thing before moving on: board games are fun. Period! The fact is, after playing the same game over and over again, people can grow bored out of it. Sometimes, the problem is from the game itself, such as low replayability, too predictable, inaccessible to certain audiences etc. That’s when publishers or game designers decide to make expansion(s) for the base game. A lot of games become more popular, more accessible thanks to the new add-ons. Here is the problem though: these expansions can easily cost as much as one board game. And certainly, they will adjust and change the game’s mechanics drastically. You don’t need all of that for your favorite games. You just need a little twist, something unpredictable, something extra flavor to your ordinary game. Yes, you need a powerup. And that is the idea of “Game Night Powerups”. 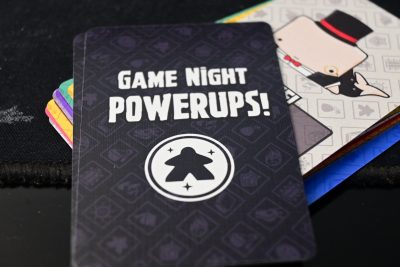 Game Night Powerups is not an expansion to any game. It is a 17-card deck add-on. Each card will have a name, along with a certain effect.

The rules are pretty simple and straightforward. There are multiple ways to distribute the cards. The players with the losing streak, or the youngest ones. Or, just give it to an underdog, to balance out the game.Regardless, it is very flexible on how to get the card. During the game, players can spend the card to gain the listed effect. In order to balance the game, the effect can only be used exactly once. With that being said, you have to be very careful about when to activate your card. And that is it. Isn’t it simple? One more thing, the rule also allows players to have house rules. You are encouraged to bend the ideas, to mix them up, in any means, as long as your game night is a blast. 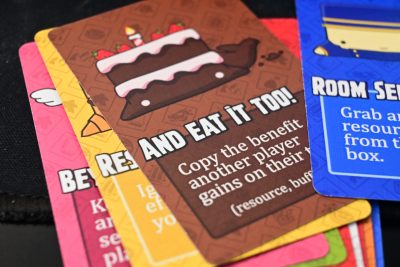 My group was fortunate to take this deck out and try on some different games. It is amazing how a deck of cards can tune up the atmosphere and the game a lot. When we first saw this, all of us instantly thought of one game: Exploding Kittens. Oh my, it was chaotic. Can you imagine Exploding Kittens having trading? Yes, you read it right. We tried to trade a Taco Cat for a Nope but apparently it didn’t work out. So we twisted the rule a bit. We let the player enforce the trading. Otherwise, they will just steal one random card and return another card. How brutal it is!

Another fun card was “One more bite”. With my amazing and outstanding luck, it was foreseeable that I would be the first one drawing an “Exploding kitten” card. But, guess what? With “One more bite”, I was able to discard that card, and draw another card. It was even better than the Defuse card, since I don’t even have to use it. But the best card is the “It’s alive”. Basically, it is a Defuse card without being in your hand. As I mentioned earlier, the gameplay stays the same. The same bitterness of being the target, with the “Take That” mechanic. But it was way more unpredictable, and chaotic in a fun way. 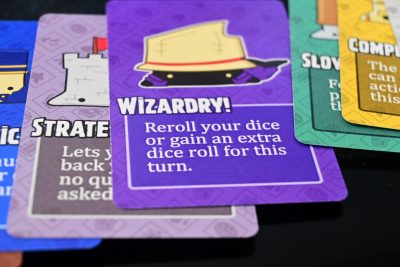 Besides the simple rules, I also appreciate the quality of the cards a lot. They are thick enough, and hard to bend nor tear. The card itself is not too slippery, so it is very easy to shuffle in whatever ways you want. The illustration is very kid-friendly and relevant to the effect of the card. I don’t see any gruesome or dark graphics in any of these cards. They are all about a whale, with different themes. For instance, we have a treasure box whale on the Treasure card. And the card is about gaining a random resource, which is a treasure in resource management games, most of the time. Another factor that I really enjoy is the effects of the cards. They blend in pretty well with our games, way more than any of us expected. 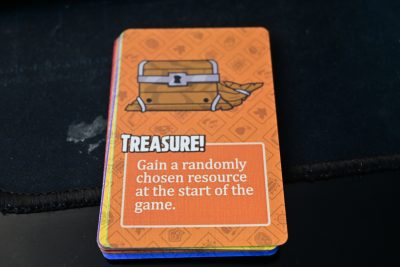 Even though our group enjoyed it a lot, there is still some room for improvement. Some of the cards might not work well with specific game types. In some games, we had to discuss whether or not the cards were appropriate to play. Wizardry is a good example. How are we going to roll dice in Exploding Kittens?  To be fair, it is very challenging for the designers to cover all the board games. In addition, if they add more explanations, it will be very crowded on the card. The card will be literally a wall of text. In order to fix this, we decided to take out all the cards, and checked if they would work for the game. I wish the designer will have some house rule suggestions for players to guide them, especially when they first use the deck.

Overall, I really enjoy the experience with Game Night Powerups. Although it didn’t affect the gameplay that much, it brought a lot of unpredictability’s, surprises, and fun on the table. We even lost count how many times one of us got frustrated and laughed out loud at the same time whenever someone played the cards. I am very curious and eager to see how the designers will improve this deck for the final release. 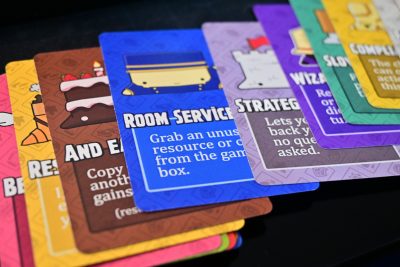