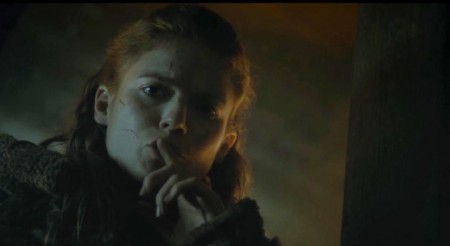 My favorite day of the week has come and gone and after a 2 week hiatus Game of Thrones is back with yet another great episode.

We open the episode in Mole’s Town.  There is a whore belching songs out while men try to guess the song in the place where Sam left Gilly. One of the whores walks away from the table and makes her way over to Gilly and she starts to complain about how her baby crying woke her up that morning. Gilly apologized but then heard a call of an owl noise. She tells the whore to be quiet but the whore doesn’t listen to her. She hears the call again knowing this is the call of the wildlings  and leaves in a hurry to get to her baby. Tormund, Ygritte  and some other wildlings come rushing in killing everyone in their path.  Ygritte hears a noise from behind a curtain. She pulls it back to find Gilly hiding with baby Sam. She motions to her to be quiet and lets them live and drops the curtain, but through the crack you can see blood pouring from the ceiling.

News makes its way to Castle Black where Jon and his friends are trying to figure out how 105 Nightswatch can win against 100,000 wildlings.  Sam is upset thinking Gilly is dead and it is all his fault but they all tell him she has survived so much that she might have got away. 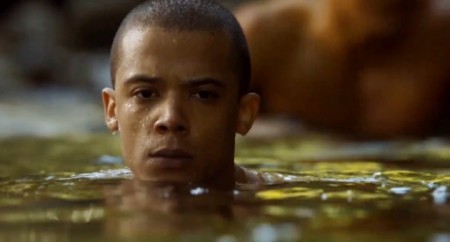 In Meereen everyone seems to be having a bath in the river. Grey Worm glances over to see Missandei naked while washing her clothes. She looks up to find him staring. The both seem a bit embarrassed.  Later he meets up with her to apologize for what has happened. She also says she is  sorry that he was castrated, but Grey Worm is grateful for his path to meeting Dany and to meeting her.  Missandei says she is glad that he watched her and as he walked away he said he was glad he did too. 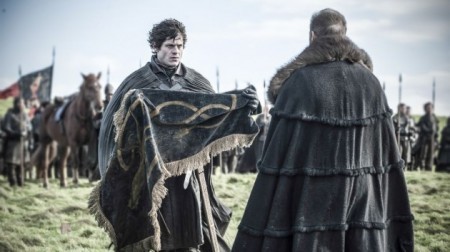 Outside of Moat Cailin, Ramsay is preparing Reek into his role of Theon so they can try to take over Moat Cailin which is currently being held by a bunch of weak and sick Ironborn.  Theon rides up to the castle alone on a horse dressed the part carrying a white flag.  Theon makes his way to speak to Kenning the leader who appears to be very ill. While Theon gives him his well rehearsed speech of how they will not be harmed if they surrender, Kenning spits blood on Theon’s face.   As he starts to yell at Theon he is starting to break down muttering that his name is Reek. Another Ironborn from behind choosing the option of living and leaving kills Kenning with an axe to the top of his head.  The Ironmen are immediately killed and flayed upon yielding. Afterwords as he tells his father they have taken over. Lord Bolton rewards Ramsay with a paper officially giving him a name change from Ramsay Snow to Ramsay Bolton.  Then they head off to take Winterfell. 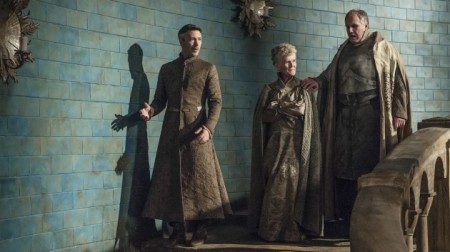 In The Vale, Littlefinger is being questioned by the Lords of The Vale as to why and how it came about that Lysa Arryn committed suicide.  Petyr Baelish’s story is not sitting well with the Lords and they call to have “Alayne”  come in to tell her side of what has happened.  When she enters Littlefinger is looking a bit nervous as he has not had a chance to get his story straight with her yet.  They as her what happened, “I’m sorry Lord Baelish, I have to tell the truth,” Sansa says. She confesses her true identity to the lords of the Vale, and says that all of Baelish’s lies were for her protection. It was Baelish, she says, who saved her from King’s Landing. She explained the torture she was receiving from the Lannisters.  She continued with how Lysa was driven mad by the jealousy spawned of Littlefinger’s innocent kiss to her cheek.  She starts to cry as she recounts how Lysa threatened her and then in a moment of sadness stepped through the Moon Door. Lady Waynwood comforts Sansa looks at Baelish who has a grin on his face. The lords and lady of the Vale accept the story of the suicide, and Littlefinger also decides that Robin Arryn needs get out of the nest and venture out of the Eyrie. 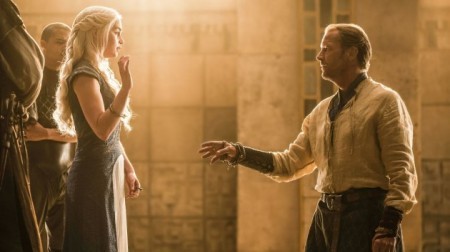 In Meereen, Barristan Selmy is given a sealed message by a small boy.  He then goes to see  Jorah and shows him the pardon that he got from King Robert for spying on Dany. He tells  Jorah he will never be alone with her again but will give him a chance to explain to her.  He enters her throne room to speak to her where she is guarded. He asks to speak to her alone but she refuses and tells him to explain. Jorah says that it is a move from Tywin to divide them but she says it is dated from before Tywin so is this a fake then?  He confesses that he revealed her pregnancy, which led to the attempt on her life, but that he saved her and that he loves her. She orders Jorah out of Meereen by dawn, and tells him never to speak her name again. 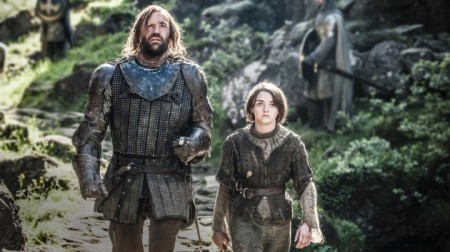 Baelish visits Sansa in her room asking her why did she help him and lie. Sansa explains how she doesn’t know what would have happened to her, if the lords of the Vale had executed Littlefinger.  He asks her You think you know me? “I know what you want,” she replies. Later, Baelish prepares a terrified Robin Arryn to leave the Vale and learn about the world.  Sansa comes walking down the stairs dressed like a sexy woman. She is darker, feathered, and more confident as she greets them and they depart together.

Arya and the Hound finally reach the Eyrie.  They discuss how killing makes Arya happy, and how Joffrey’s death was boring. The Hound’s bite wound is still bothering him, though he shrugs it off.  The are stopped by a Knight who asks them to identify themselves. The Hound announces himself  and Arya announces herself.  The guard apologizes and announces that Lysa died 3 days ago and  Arya breaks into hysterical laughter. 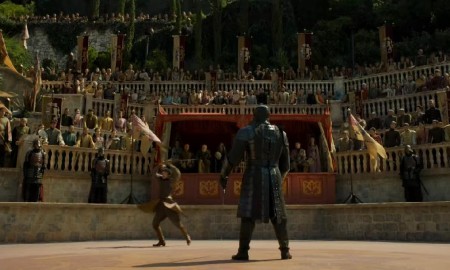 Its almost time for the battle of the Red Viper vs. The Mountain. Tyrion and Jaime are in his cell awaiting  Tyrion’s trial.  They discuss Oberyn Martell’s prospects, murder, and their simple cousin. Tyrion says he became obsessed with learning about why their cousin smashed beetles for entertainment. He was desperate to learn the reason why he would do this again and again, but he never did figure it out. He said it gave him nightmares but thought there must have been a plan why he did it. Jaime has no answer for Tyrion. Outside, the bells begin to ring it is time for the combat. 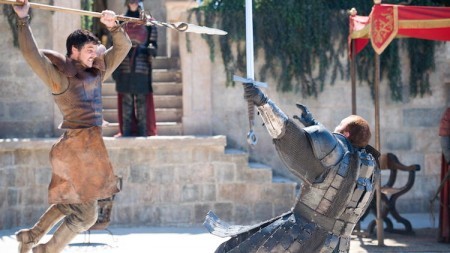 Tyrion is led to the area where the duel will take place. He is irritated that Oberyn is not wearing any armor and is drinking, but Oberyn is perfectly confident and says he always does this before a fight.  Ellaria is alarmed at the Mountain’s arrival but Oberyn tells her “Today is not the day I die,”  and promises not to leave her alone in the world.

The combat begins. Oberyn fights with a slim spear that he is spinning all over with great speed and snake like moves. Clegane with an enormous sword.  As they fight, Oberyn introduces himself to the Mountain, and says that he has come to King’s Landing to kill Clegane. “Elia Martell,” he yells to The Mountain. “You raped her. You murdered her. You killed her children!”

Clegane breaks the head off of Oberyn’s spear, but he slips away and takes another from the edge, and stabs the Mountain in the chest. Oberyn repeats about Elia, demanding a confession and demanding the Mountain say his sister’s name then tearing at the Mountain’s calf and finally stabbing him in the face.

Mountain collapses, Oberyn  gets more agitated. “You can’t die yet”. “You haven’t confessed!” He demands to know who ordered Elia’s murder while pointing at Tywin. He is leaning in to The Mountains face to yell at him to make him confess before he finishes him off, he leans too close. His need to draw out the vengeance will be his undoing.  As he stretches out the moment, the Mountain recovers briefly and grabs the Viper’s legs, dragging him down and smashing his mouth.

The Mountain knocks Oberyn to the stones and straddles him pushing his thumbs into Oberyn’s eyes,  The Mountain finally confesses “Elia. I raped her,”  as he gouges out Oberyn’s eyes. “Then I smashed her head in like this.” Clegane finally crushes the Prince of Dorne’s  skull into the  stones. The Mountain has won.

The Mountain collapses, Cersei smiles. Tyrion stares numbly at his slaughtered champion as Tywin stands, and sentences Tyrion to death.

I was so heartbroken at this conclusion. Next week is episode 9 which usually upsets me the most. Remember I have not read the books but I am praying that Tyrion somehow manages to escape or i might have to break my TV.. Let me know what you thought of tonight’s episode.

Also next week I will have a special post of getting ready for the finale night with food and decor I use for my party. Do you celebrate Game of Thrones at all? Let me know your party ideas.