There is that pleasure center of the brain when someone gets something exciting, that reward center that lights off making you have that momentary feeling of happiness or joy that you got something good and it feels good.  This is the reward sensation that creates online gambling like the ones you would find at Stargames Casino so appealing, like Lucky Lady’s Charm Deluxe for example.

Sure you play and win small amounts or lose small amounts but the big payoff is what produces the reward and that momentary sense of happiness.  Online slot games capitalize on this even more by becoming more video game like while keeping the system essentially the same (% payout will always be a means to make money for the enterprise) there are those winners who believe their luck is with them and then rarer still those who actually get lucky off of others losses.

Loot drops in games aren’t that much different whether it is the loot crates in Overwatch or any other system that does “drops” where you either spend real cash, or earn enough in-game currency to purchase that random container of loot.  These drops produce that reward sensation when you get the rare, exotic, unique, legendary or whatever you want to term the rarest items.  These are like the big cash wins in slot machines, while the smaller common, uncommon items are the token wins that give you something for your effort and convince you to try again.  Obviously in most games you can’t trade or sell the benefits of the loot drops/crates like you could with an online slot machine where you can turn it into real profit, but some games like CS:GO skins you can sell and trade on Steam so there is a way to make currency from a few games as an example. 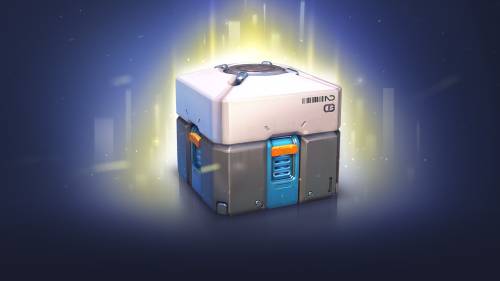 I am no stranger to this loot crate system, when Heroes of the Storm became version 2.0 and introduced the loot drop system I was immediately boosted to level 140 from all my years of playing and I had so many loot crates and unlocked more skins with that one conversion than I had earned up over nearly 2 years of play.  When I play Overwatch I too want that rare skin, especially with the Halloween skins coming out this year and so many of them looking amazing.  They don’t add any purpose other than cosmetic, yet it is the prestige, the luck, the rarity one gets from saying I played that so much or was so lucky I got this that keeps me coming back even after the game gets repetitive at times.   Now I don’t personally play online slots but I do play slots when I go to casino’s and I always prefer the ones that are more like video games, AMC Walking Dead, Willy Wonka, Ghostbuster, Wonder Woman…etc.  They all have some sort of theme or niche with a reward system that makes me have fun burning a few hours and a few twenties just for that rare chance I can bring back more than I came with.  One lucky time I did turn $20 into $500 at a Lord of the Rings slot machine game, and I proceeded to purchase a PS4 with that money the year it came out.  This was the luckiest I have ever been at a casino slot game and was very happy to put that money immediately into something that would provide more gaming entertainment, so the PS4 was bought and Destiny 1 and this all came from starting with that $20 I put into a video game slot machine. Most of my stories do end with me losing my $20 as I never gamble with more than I can afford to lose and figure spending an ROI on slots is not very different than burning it at the movies or other form of entertainment as long as it was what I was planning on spending anyway.

What is your preferred reward system with games or entertainment?  Feel free to share below.