Okay so Google officially announced the Google Nexus and now there is a 7″ android tablet that really competes with the Kindle Fire (but wait didn’t the Samsung Galaxy Tab 2 already do that?). 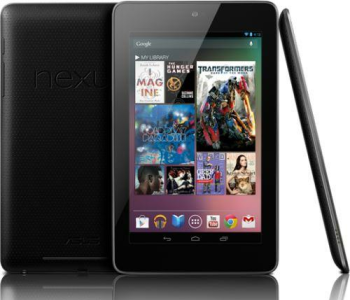 The Google Nexus is certainly looking to be for everyone who wished the Kindle Fire had more but didn’t.  It is a full Android Jelly Bean tablet that has a front camera (1.2 megapixel), MicroUSB, Bluetooth, and 1280×800 resolution.

Now, when it comes to power this is where the Google Nexus 7 literally crushes the Kindle Fire.

The Google Nexus 7 tablet has a NVIDIA Tegra 3 chip which is a quad-core architecture CPU speed that can clock at 1.3GHz.  Combine this with 1GB of dedicated RAM and a 12-core architecture GeForce GPU makes this the most gaming capable tablet next to the iPad 3rd Generation for less than 1/2 the cost!

You have access to everything on the Google Play / Android App store unlike the limited app access of the Kindle Fire and this also has NFC and Android beam.  What this means is you will also get video Skype and wireless keyboard on a 7″ tablet which are things you can’t do with the Kindle Fire for a tablet that costs the same amount as a Kindle Fire.

The only negatives here would be for very casual users who want the absolute simplicity of the Amazon customized Android OS for the Kindle Fire.  I am a huge fan of the Kindle Fire my fans and bought 3 of them as gifts for my kids and mother in law for Christmas, but had this tablet been released 7 months ago, I would have bought all of them Google Nexus 7 tablets instead (well especially for my kids who are much more into gaming, my Mother in Law may still have gotten the Kindle Fire for the simplistic interface).

This tablet is probably the best alternative to the iPad to date if you don’t have the money for an iPad.  iPad 3rd Generation still has far better resolution, larger screen size, more storage (16GB minimum up to 64GB) but provided the Google Nexus 7 doesn’t come out of the gate with battery life issues, or defects this will likely be the 3nd best selling tablet on the market within it’s 1st month of release and may overtake the Kindle Fire by Christmas.

That being said I do believe Amazon will counter with a newer Kindle Fire model that will even the odds a bit at some point.

What do you think, should I pick one of these up to give away in an upcoming contest here on DragonBlogger.com at some point?  Share your thoughts.