If you’ve maxed out all the content there is to play in Grand Theft Auto 5’s story mode, you might think it’s time to delve into Online, the game’s multiplayer mode. However, even discounting the fact that you might as well play the two concurrently, you shouldn’t be so hasty to jump ship just yet. Otherwise you’d miss out on a major aspect of the singleplayer campaign – cheats.

And we don’t only mean methods of gaining an upper hand versus the NPCs. You can also use cheats in GTA 5 to augment your gaming experience with a number of fun gameplay mechanics that are otherwise walled off. But how does one actually go about activating these cheats? 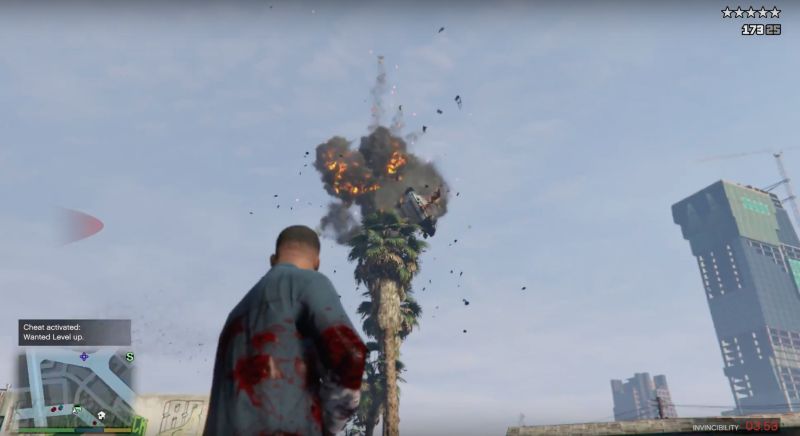 Older gamers might roll their eyes at the question. They’ve likely been using the same method to activate cheat codes that has been common since the dawn of the industry. But with several newer games having a menu option to bring up a prompt to enter cheats (or worse, a simple catalog of cheats where you just hit a button to turn them on) this could be a genuine query in the minds of younger players or people new to gaming.

How you enter cheat in GTA 5 differs depending on which platform you are playing on. For consoles (either the Xbox One and Xbox 360, or the PS4 and PS3), the primary method of activation is with button combinations. You need to press a select sequence of buttons on your controller in quick succession to activate the cheat. There is no special space where this must be done, you just do it in regular gameplay. As such, your character may flail and jump around (kind of like this), but that’s normal. You also won’t see what commands you’ve entered, so if you feel like you messed up just wait a few moments and try again.

On PC and the current-generation consoles (ie the PS4 and Xbox One too) another method to activate cheats is available. You can use the in-game cellphone to enable cheats by calling a given number that is associated with each cheat. This is sometimes better than the regular method as it doesn’t interfere with your gameplay and you see what numbers you’ve dialled, so can make corrections if required. However once you’ve gotten used to button combos and get them right on first try, that’s the quicker method.

Entering cheats when playing on PC, but without the mobile phone method, is different than to consoles. Instead of just pressing button combos during gameplay, you need to summon the developer console with the tilde (~) key – something long time PC gamers will be more than familiar with. After that , all you need to do is type the code associated with the desired cheat into the field, hit enter and voila, you’re all set.

Keep in mind though, that the codes for cheats change across platforms. The code for the same cheat on Xbox and PlayStation will not be the same button combo, and on PC it will be entirely different since the codes are phrases. The only consistent cheats are the phone cheats, since the same numbers are associated with the same cheats on all three applicable platforms.

When you need a break from the chaos of GTA Online and don’t have anything to do in the game’s singleplayer, just refer to this guide and look up some cheats for GTA 5 and enjoy a few extra hours of fun.

Dan Smith is an avid gamer and has been enjoying Grand Theft Auto 5 ever since it came out. As you’ve probably guessed he’s also a part-time writer and when he’s not on his keyboard or game controller, enjoys racing go-karts, hunting and fishing.