Technology has made huge advances in recent years. New technologies and the passing of time make for more information to learn and remember. Originally, mathematical equations, such as the Pythagorean theorem, needed to be memorized as all calculations were written out by hand. Now that we have calculators, we don’t even learn the actual equations in school anymore. It used to be, that, if you wanted to remember appointment times, event information, phone numbers, or even special dates like holidays and birthdays, you had to write it down, or just memorize it. Nowadays, I see people relying much more on technology and social media for remembering these things, and of those that do, a surprising number don’t have the information written down anywhere else, and don’t have it memorized.

I try my best to learn the information of those people whom I talk with most, but I must admit that Facebook makes things so much easier, reminding me of upcoming events and birthdays about a week in advance. After 4 years using Facebook, I have found that I have a lot of people sending birthday wishes when the day comes for someone, but I have always wondered how many people actually knew the date for themselves or simply saw the notification on Facebook. 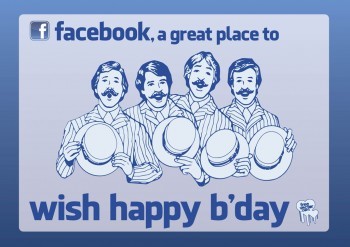 About 6 months ago, the idea came to me to put my ‘friends list’ to the test. Without telling anyone, I hid my birthday from displaying on my profile, and then I waited. A few days ago my birthday showed up, and I waited. That morning I received only a single message from a distant family member who had seen a message on my mother’s Facebook profile about my birthday. (I had also not received a single call or text message from birthday well-wishers).

1 o’clock arrived and I changed the settings so that my birthday would now display, only to be bombarded with posts on my wall. Within only 20 minutes I had 4 messages! By the end of the day I had around 20 messages, and most of them were from people with whom I’m not very close; acquaintances and distant family members who I can guarantee didn’t know it was my birthday- except through Facebook.

I’m not sure how I feel about the results of my experiment. On one hand, I’m pleased with the attention. It’s definitely not often I get so many messages, and it was nice to see that even people I didn’t know well would take the time to even leave a message. On the other hand, however, I’m somewhat disappointed as a bunch of people whom I had expected to remember my birthday, didn’t. I received a couple calls and texts, in the days following, from friends and family asking if they had missed my birthday, and it’s not surprising, now, that most of them aren’t regular internet users.

Do you experience similar situations for your birthdays? How much do you rely on Facebook and other social media and technologies to remember ‘all the important stuff’? Do you like the somewhat impersonal direction that we’re headed by using technology in this manner? Let me know your opinions in the comments below!