You are invited to your wife’s friend’s party. Everyone is really nice, and welcoming, but there is one problem: they only want to drink. You are not a big fan of drinking and, of course, your livers too. You don’t want to cause your wife to be concerned. She might think that you are refusing to hangout with her friends. You don’t want to end up sleeping on the sofa tonight. At the same time, if you start drinking, you will probably spend the night in the ER; just like what happened last time in your bachelor party. What would you do? Fortunately, Heroes of Barcadia has come to the rescue. 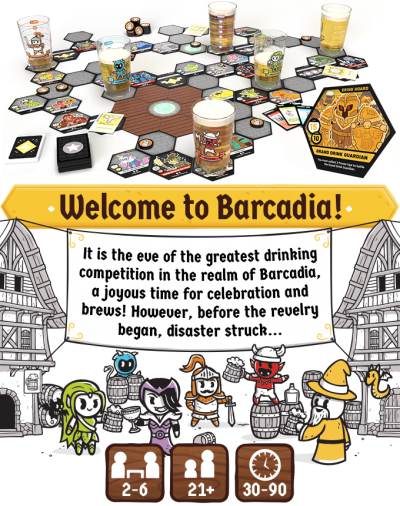 Heroes of Barcadia is a tile based, dungeon crawler board game for 2-6 players. In this game, you will be one of the adventurers, competing with your opponents to reclaim the precious Drink Hoards from the monsters. This game also features a very unique mechanic: Liquid Life System. With the Liquid Life System, players will use the amount of beverages to determine their current HP. Whenever players take damage, they will drink a certain amount from their cup. Players don’t really have to use hard liquor or beer for their HP. They can use anything that they want to, from soda, pop drinks or even fruit juice.

The game will start with all players filling the cup with their favorite drinks. Then, everyone will construct the dungeon together. They will set all the tiles faced up, to connect all adjacent rooms together. While constructing the dungeon, players have to start all the room tiles from the starting point. During the setup, each player also receives three loot cards. Players can use these cards later to boost the attacks, or sabotage the opponent’s attack. The final step for setting up is figuring out the first player. Everyone will roll a D20, and whoever has the highest score, will have the honor to move first.

Players can make a move by flipping the adjacent cards and face off against whatever in that room. If it is a monster, players only have to roll equal, or higher level, to defeat it. When they manage to defeat the monster, they can claim a Loot card or a Power-up card. If players face a boss, they will have to perform a roll-off against an opponent of their choice. In case of a tie, it will be a re-roll. What happens when players lose the fight? Of course, their HP will suffer. Players will have to drink away their HP, depending on the attack damage of the boss or monster.

During the crawling, players can grant themselves more abilities by collecting Power-Up cards.  One player can only collect up to three Power-Up cards at a time. Moreover, during the journey, players might encounter a lot of different sneaky traps, magic portals or even sudden death dueling among players. Sometimes, they might have to cooperate with different player(s) to get out of the bad situation as well. When players collect three Power-Up cards, they will be able to challenge the Grand Drink Guardian. If a player succeeds in defeating the Guardian, he or she will plunder the drinks and become the winner of the game.

When it comes to drinking and party games, it is a very dangerous and unexpected field. You don’t know what people will do when they get drunk. They might damage or spill the liquor over the game components. Fortunately, the development team has done a fantastic job in making all the components water-proof. Besides the rule books, everything will be sturdy enough for owners to brag and play the game over and over again. You cannot make anyone become a drinker; but you definitely can make anyone become a gamer by drinking at Barcadia.