Back at E3 Square Enix had announced a new game for the ever popular Hitman franchise by showing a fabulous trailer. The trailer back then didn’t show much about the game except for the exceptional environment and textures.
Since then, it is the 2nd time that pictures of the game have been released. This time around it’s from the closed Alpha version of the game which was given to only a few gamers from around the world. If you’re wondering where the screenshots and GIFs were leaked from, it’s the Reddit forums where a fellow gamer had the privilege of playing the game in the closed Alpha stage.

The main purpose of the closed Alpha is to get feedback from the gamers to improve the current version of the game from time to time. At a certain point, the game changes into the Beta stage which will be open for a wider audience.
Nevertheless, the forum member reported that he felt that the game was more closer to the feeling of Hitman: Blood Money as compared to Hitman: Absolution (which is supposed to be a good thing since a majority of gamers preferred the gameplay of Blood Money over Absolution). Furthermore, the environment has an important role throughout the game. For instance, it provides you multiple ways to reach your target. There are many path choices among them some are , going from the front entrance, climbing from windows, hanging on ledges or going through the garages. You can also temper with the fire alarms and etc by a screw driver. Uniforms and disguises are an important element to the action as always. Loadouts are also back giving you the feasibility of selecting your weapons whether a pistol or a rifle or a lethal or nonlethal weapon. 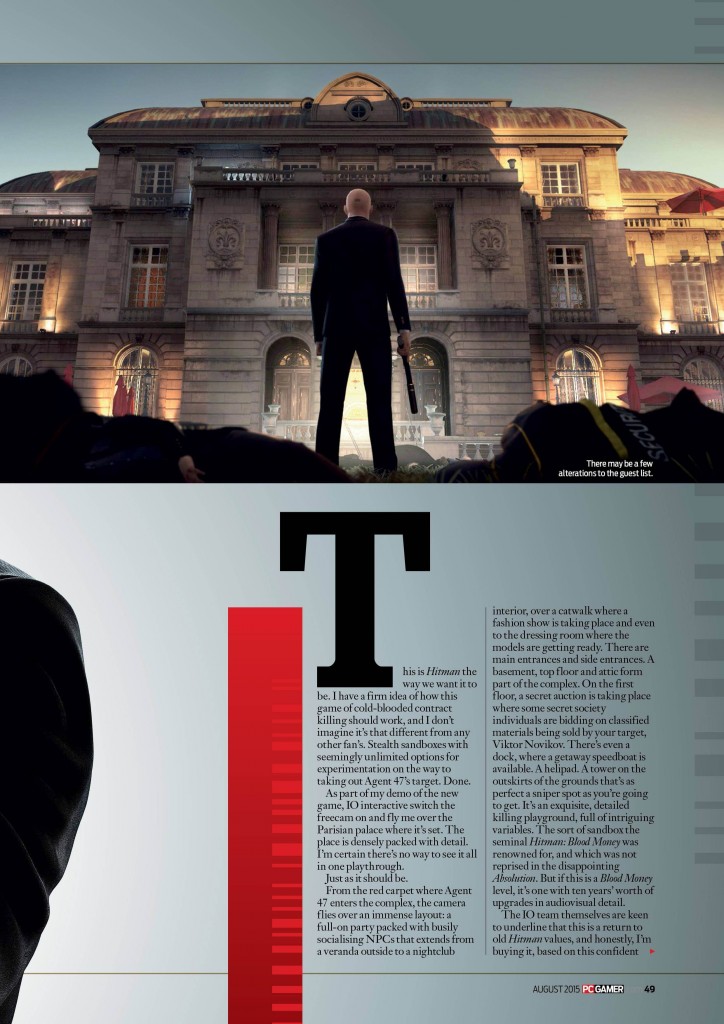 Side missions will in some manner provide some help and make your missions easier.
You can find the official post here. Be sure to check that link out for several images and GIFs.
The game is set to be released on December 8, 2015 for PC, PS4 and Xbox One. The game will continue till 2016 and beyond with DLCs, contracts mode (custom mission) has been improved and will keep players busy.