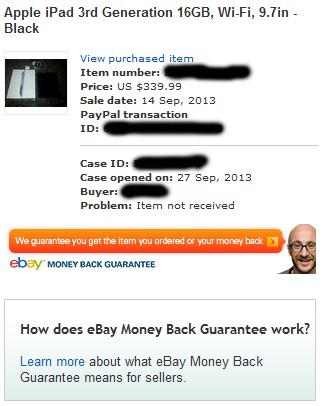 Last month, I sold a 3rd Generation Apple iPad on eBay to a seller in Malta. They bought it using my Buy It Now price of $339.99 and paid instantly. I packed it up, printed an international USPS First Class Mail shipping label on eBay, and took it to the local post office… Little did I know, I was about to be scammed out of an iPad and my money.

I am an experienced seller on eBay and I have been on the platform for years, retaining 100% positive feedback all this time. I know the ins-and-outs of eBay as well as the major shipping companies: United States Postal Service (USPS), United Parcel Service (UPS), and Federal Express (FedEx). I mostly sell items that I no longer want or need, such as my old smartphone after I have upgraded to a new one, but I occasionally buy used items at auctions and yard sells to resell to make a profit.

What I am trying to say is that I am not a novice eBay seller with less than 10 feedback complaining that I got scammed. I see these people complaining on eBay forums that they got scammed by a buyer, when in reality, they just don’t know how to use eBay. I do in fact know how to use eBay and I still lost almost $400 because of this combined loophole between the United States Postal Service tracking policy and eBay’s Buyer Protection policy that international buyers can take advantage of. I am here today to share my story and accompanying advice to make sure this does not happen to anyone else. The best way to stop a con artist is to inform the people he is exploiting which, in this case, can be anyone in the United States that offers international shipping on eBay.com. Here is how they can scam you.

I sold the iPad on September 14 and took it to my local post office that same day. The destination was a small island off the coast of Italy called Malta. I was expecting it to take 3-4 weeks to get all the way to Malta, but after just 13 days (not even 2 weeks), the buyer opened a case against me claiming that they had not received the iPad. The buyer was also requesting tracking information.

Step 2: Seller Responds to the Buyer 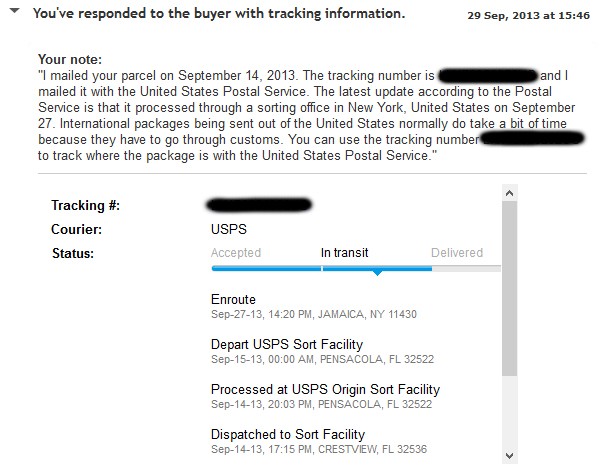 At this point, I did not suspect anything malicious going on. I simply responded to their case using my best “this-can-be-translated” English, just in case they needed to use Google Translate because they didn’t speak English. I explained that I was shipping the package from Florida and that it needed to travel to New York, then go through customs, then get on a plane to fly to Malta. Because I purchased the USPS shipping label through the eBay website, the tracking information was attached to the online listing since September 14 when I mailed it. But they requested the tracking information, so I gave it to them again anyway.

Notice that the iPad arrived in Jamaica, New York on September 27 – the same day the buyer opened up the Buyer Protection case. They did not even give the package enough time to travel up the East Coast of the United States, let alone fly across the world to a small island called Malta.

After responding to the buyer with the tracking information, I gave them 7 days to email me back before I escalated the case to eBay Customer Support. When I escalated the case, I simply had to explain to eBay what the problem was so Customer Support could make a decision and end the case. The buyer obviously wasn’t going to email me back, so I was hoping I could get the case to go away by having eBay make an instant decision. In my message to Customer Support, I explained how I bought a shipping label through eBay and took the iPad to the local post office the same day. Once I dropped the package off, it was out of my control. I supplied a tracking number. I have fulfilled my duties as a seller… There is nothing else I can possibly do.

Even after supplying tracking info, responding to the buyer’s case, and escalating the case to eBay, I still lost. All the buyer did was open the case on September 27 and never responded again. They never answered my first email and they never answered after I escalated the case to eBay Customer Support. And they still won. Not only will the iPad eventually show up at their house, but I also have to refund them all of their money. Essentially, the buyer legally stole an iPad over the Internet.

Thanks to eBay’s wonderful Buyer Protection policy, I was forced to refund the buyer for the iPad and the shipping cost – a total of $378.94. Officially, everything they did was legal. It was not exactly ethical, but legal nonetheless.

Why Did They Get Away with It?

You may be wondering how this scam artist from Malta got off with a free iPad. I was wondering the same thing myself, but once I started analyzing the case, I should’ve noticed from the very beginning that this was going to end badly. Here are the only two reasons that this eBay criminal got away with it.

The first mistake I made was using USPS First Class International to ship such an expensive item. First Class International is very cheap compared to USPS Priority Mail or services offered by FedEx and UPS, but it is cheap for a reason. It has a tracking number, but it will only update within the United States. As soon as it left the international post office in New York, the tracking stops. The main reason eBay did not side with me on the case is because the tracking did not say “Delivered.” But because it was going to Malta, it will never actually say that it was delivered on the tracking. It will simply say Jamaica, New York until that tracking number expires.

They Opened the Case on eBay.co.uk

The second problem I had was that the buyer opened the case against me on the United Kingdom eBay website. I live in the United States, so when I was trying to contact support, I could not call the British phone numbers. Whenever I called the American eBay support, they could not help me because the case was opened on eBay.co.uk, not eBay.com. This meant that my only way I could communicate with eBay UK Support was through their instant chat feature. This turned out to be a big pain because I could not adequately explain how I got in the predicament I was in. I needed to talk to someone on the phone.

How You Can Protect Yourself

The whole reason I am writing this article is to make sure nobody gets scammed on eBay like I did. Here is how you can protect yourself against eBay’s con artists.

Ship to United States Only

Scam artists on eBay rely on poor tracking information supplied by the shipping companies. With reliable tracking information, they would never win an “Item not received” case. This is why I recommend that for people like myself who sell less than $1,000 a month ship only to the United States. The United States Postal Service still loses packages within the country, but it is much more reliable to ship domestically than internationally.

Ship to Canada and the United Kingdom

If you run a business and rely on international sales, I would recommend only shipping to safe countries using a reliable shipping company. I have sent eBay items all over the world – Mexico, Central America, South America, Europe, Asia, the lot. The only two countries I have never had a problem with are Canada and England. There are others that are more reliable than Brazil or Malta, such as France, but if you want to play it safe, stay with Canada and the UK.

Use FedEx or UPS

If you insist on shipping to Mexico, South America, and other parts of Europe and Asia, you need to use FedEx or UPS. It’s more expensive, but if you pass that fee on to your buyer, it won’t make a difference for you as a seller. If someone in Brazil really wants to buy your Abbey Road album and buying it from a United States eBay seller is the only way to get it, they won’t mind paying however much it costs to get it there.

The reason I recommend only UPS and FedEx is because they see that the package makes it all the way to the buyer’s address. Even though USPS Priority Mail has international tracking (unlike USPS First Class Mail), UPS and FedEx are superior because they keep package handling in-house. When you send something via USPS, the United States deals with it until it goes through the international post office. As soon as the package arrives in Brazil, Italy, France, or wherever you are sending it, it becomes the problem of that particular country’s national postal system – USPS is done with it. USPS still offers tracking, but if the Italian post office doesn’t scan the package as it comes through, tough luck. You’d lose your eBay case because it doesn’t say the word “Delivered” on the tracking. UPS and FedEx, however, have sorting offices around the world. So if you mail something to Mexico via UPS, it will actually be a UPS employee who handles and delivers the package. They never hand it over to the national postal service, which is why both UPS and FedEx are much more reliable.

Specifically if you are considering shipping throughout the region of Asia than Yarui is the brand you can trust. The reason I prefer Yarui is because they are one of the finest Shipping Agent from China having connections with more than 100+ destinations throughout the Globe. Since they have a great hold over almost all ports of Asia specifically China they are undoubtedly the best option if you are sipping to Asia.