No medium does horror quite like virtual reality. Every creak of a floorboard, every passing shadow and every suspicion of a scare lurking around the corner is magnified as you’re immersed in your greatest nightmares.

If you’re brave enough to spend Halloween in your headset this year, VIVE has all of your scares covered. With both hardware and content deals now live, this Halloween season will be your spookiest yet. 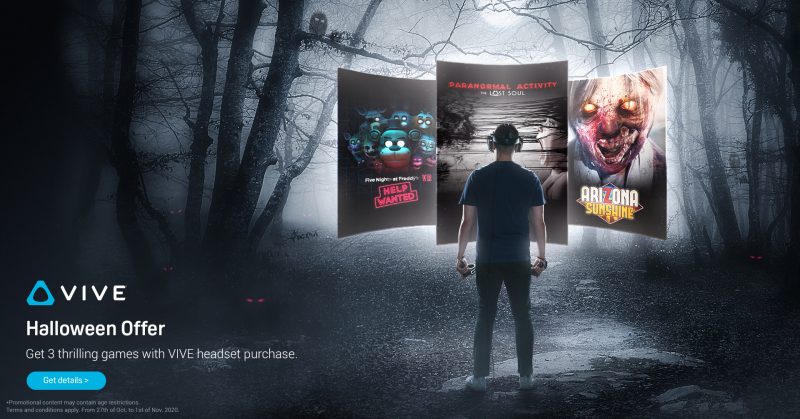 All participants will also receive two free months of VIVEPORT Infinity, the unlimited VR subscription service bringing you hundreds of top titles and indie gems. Viveport Infinity is your all-access pass to discover VR games, apps, and videos for just $8.99/month with an annual subscription.

More details on which VIVE headsets qualify you for this deal in your country can be found here: vive.com/2020halloween

Let’s take a closer look at the content that comes with your new VIVE headset this Halloween:

The built-for-VR zombie shooter Arizona Sunshine, developed by Vertigo Games, is a classic fixture of any VR enthusiast’s library. The first-person shooter has made a name for itself with its emphasis on free movement in its environments and real-world handling in its weapons. Survive solo in a single player campaign playing out in bite-sized missions, allowing you to take the apocalypse one step at a time or in one fell swoop. You can also take on super-sized zombie hordes with a co-op buddy, although adding an ally does make the undead throngs just that much more aggressive. However you decide to play, this post-apocalyptic southwest is light on ammo and big on danger.

One of the world’s most recognized gaming Ips, Five Nights at Freddy’s finally came to VR and in a terrific (terrifying) collection. With scenes and levels from 5 of the classic titles as well as original mini-games with the killer animatronics like Freddy and Foxy, there is an amazing amount of content to explore. Each mini-game in Five Nights at Freddy’s VR: Help Wanted will have you quaking with anticipation and fear.

Based on the hit PARANORMAL ACTIVITY film franchise, this terrifying immersive experience will have you shaking as you never know when you’ll scream next. Featuring a proprietary scare engine, you’ll encounter a different experience every time you dare to play. As you explore a house in a quiet neighborhood, you’ll soon find that you’re not alone as you discover clues and unravel the horrifying mystery of what’s gone on in the house and struggle to survive the terror that hunts you.

If you already own a headset, we still have a great Halloween deal for you. Through November 3rd, all annual Viveport Infinity subscribers can claim a free copy of Skydance Interactive’s The Walking Dead: Saints & Sinners while supplies last. This deal can be redeemed by all new and existing annual subscribers including those who upgrade from their monthly membership.

Just make sure to launch the title in Viveport Infinity before the promotion period is over to ensure it is yours to keep! Additional details on how to claim your copy of The Walking Dead: Saints & Sinners can be found here: https://www.viveport.com/halloween-2020

One of the best VR games of 2019, The Walking Dead: Saints & Sinners takes you to a flooded New Orleans teeming with walkers and living enemies of warring factions. To survive, you’ll explore the nooks and crannies of the Big Easy to uncover secrets, scavenge artifacts and craft weapons all while you take on the hordes of walkers. As you unravel the mystery that surrounds NOLA, you’ll make grim choices with lasting consequences.

Craving even more scary content? Check out our guide to the top 10 horror titles included with Viveport Infinity.

How to Download and Use Viveport Infinity to Get VR Games