So I have been testing SwitchAds since mid December 2014 on DragonBlogger.com, I replaced one of my 300×250 Google AdSense banners with the SwitchAds network banner and let it soak for 4 full months before I was willing to come to a conclusion and my conclusion is strictly comparing it to how well that 300×250 ad performed in that same spot with AdSense alone.  This is important because if you are already used to earning a certain amount of revenue from an ad spot, it is important to know if the ad you are replacing it with will outperform or perform worse, so taking performance captures over a sustained time is very important.

Now my capture for AdSense for my 300×250 banner on DragonBlogger.com was taken from September 1st 2014 to December 1st 2014.  Again, keep in mind this is a single AdSense Banner, I use 3 at the same time on my blog and this is not my top performing banner.  You can see for that 3 month period the AdSense Unit generated $57.51 at 67,428 impressions which actually had a really impressive RPM but Google forbids sharing CPC/RPM numbers when showcasing this stuff. 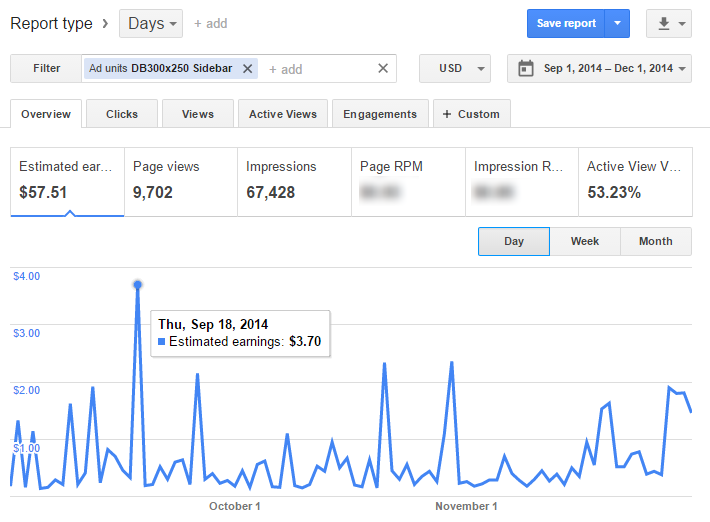 In theory SwitchAds is fantastic, it basically allows advertisers to direct target your ad spots and bid to give you the best possible value for that ad.  It does this in a way I found to be much easier to setup and forget about than say DoubleClick or other programs where you have to constantly set thresholds, tag, tweak and repeat for individual ad units.  You simply list your ad in SwitchAds and you get your ad tracking code.  I use the Quick AdSense plugin to make it easy to plug in various types of advertising code into my sidebar, and the widget was installed with ease in December when I set it up. 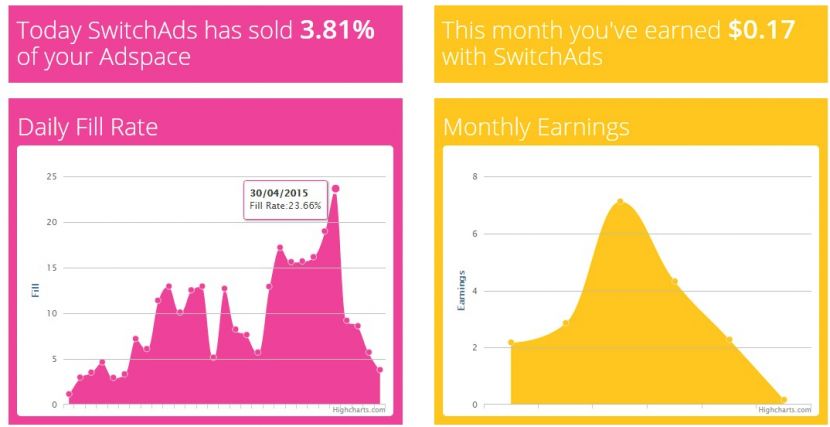 You get a nice graph showing you the number of Ads that you have sold, and your fill rate on a daily basis.  The fill rate is how many ads were specifically sold vs just earning from Google AdSense backfill for the ad, so even if no ad is purchased you still get an AdSense ad that fills the spot.  The this month is taken from my screenshot on 5/4 so you can ignore how low it is for now.

So for the first month or so putting the ad in, there were lower sold rates, this is a new ad spot and it needs to collect impressions and value providing proper analytics so this is to be expected.  Still you can see the fill rates were around 7-12% within 3 weeks of adding SwitchAds to my website and replacing my Google AdSense 300×250 banner.  Though earning rates were lower, I wanted to give it some more time to see as fill rates increased.  I can’t show eCPM exactly, but they are about 20-25% what Google AdSense eCPM were for that first month after using SwitchAds. 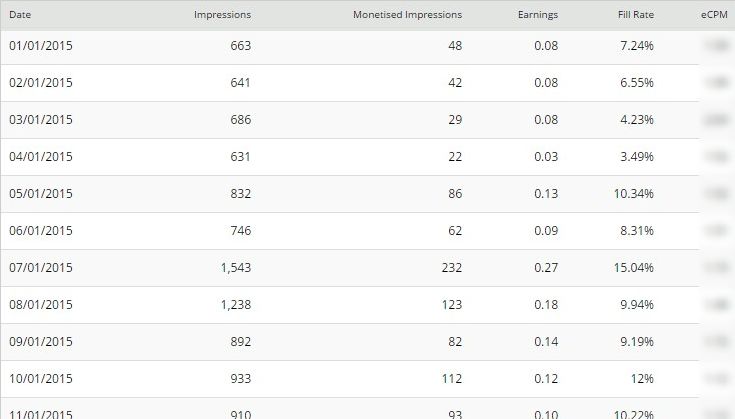 By April my most recent month I had seen Fill Rates increase, I was starting to climb and saw consistently above 11% fill rates, and even as high as 23% on one day. 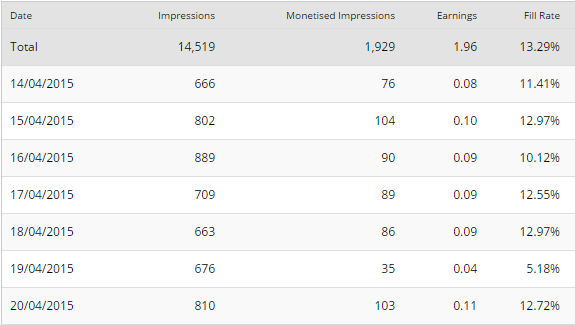 But despite all of that, for the same time frame period, the SwitchAds did not perform as well as the Google AdSense in the same spot, keep in mind 4Q Ad marketing tends to be higher than 1Q so this is certainly a little bit of the factor, also there were 4k less impressions in the 2015 date range period, but still the earnings of $14.35 on 64,297 impressions was dramatically less than the AdSense equiv.  Even with average for the whole time period a 11.05% fill rate. 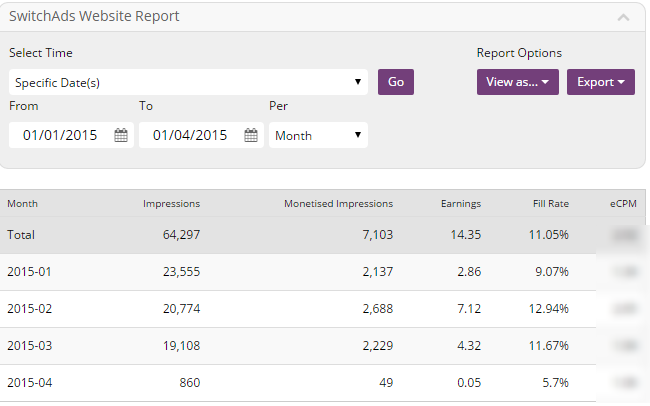 SwitchAds does however have the value of adding additional advertisements to your site, if you are maxed out on the Google 3 ads for example, you can get more by adding in additional SwitchAds which gives you potential to earn in addition to your 3 AdSense banners.  On top of that, highly niche sites have more of an advantage in selling and competition than an online portal like mine which covers a wide range of topic without any real niche specialization, so there is a good chance a niche category blog would have better fill rates and performance too.

With Google putting an ever increasing importance on Pageload times, it is getting more and more pivotal that you make sure your pageload times are optimized and better than your competition or you could end up lower in the search results page resulting in less traffic and impressions in Google Search.  This is where I found the biggest issue with SwitchAds is that because the system has to inspect, sell, and do whatever it does to fill the ad slots, it also adds overhead to pageload times.

Using Pingdom Tools test and Google PageSpeed Insights, the Pingdom scripts run and they bog down pageload quite a bit, some of the highest offending scripts can add 1.5 seconds or more pageload time by themselves.

And this is only some of the scripts, it loads a high number of them, contributing to an overall pageload increase of 5 to 8 seconds timing to use SwitchAds media script code.

This Pingdom Tools test was run on 5/4 with SwitchAds running and no caching at all on the website.

This Pingdom Tools test was run on 5/4 after removing the SwitchAds script and again I had disabled W3 Total Cache the whole time, so no caching was used.  The important things to notice is that with SwitchAds disabled, there were almost 80 less requests made on the page, and almost 7 seconds shaved off the pageload time.  The 400kb size difference would have been negligable and the fact that my PageSpeed was 3 points lower just from using SwitchAds code is reason enough to give me pause about using it further.

So honestly the service is easy to use, but at the pageload performance hit your site takes and the fact that at least for me AdSense performs almost 4x better in the same ad spot alone by itself, I cannot conclude that SwitchAds is for everyone, but it may be a consideration if you can’t use AdSense or were banned from it and you need a way to monetize.  Just like AdSense the payment threshold is $100 before you receive a payout, but they will pay out to PayPal unlike AdSense which is a plus.  Also there are some other minor factors that are worth mentioning including that you get to set your floor price, though lower will get more ads sold, you have to find a happy medium to get most value for your ad slot and I played around with a few different price points (this is setup manually by your representative who helps you get setup in the system).  The fact that you get a live person to work with and help you is way better than you get with Google AdSense, where you will have to do all the research, testing and experimenting yourself or do the reading online.