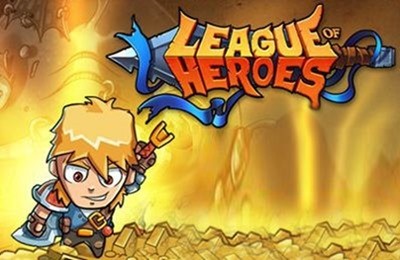 League of Heroes is a game made for not just Android systems, but also Apple IOS, and Amazon app store as well. A company named Game Lion makes “League of Heroes” as well as a number of other fun games.

In League of Heroes, you play a character who starts with a bucket for a helmet. Not much protection, but soon you will gain valuable coins and other items you need to help you get improved weapons and armor, and other goodies. 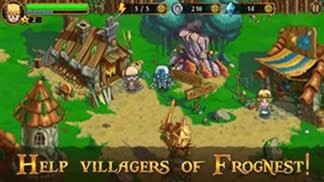 You start in the village of Frognest, where you can buy the things that you need to go on quests and kill monsters. In town, you will find a number of characters you can interact with, so be sure to get to know them all.

This game claims to be never ending, and has over 60 quests to do. I have done many of them myself, and have loved them all. The landscape is beautiful. Everything is hand drawn, and not only colorful, but detailed as well. The monsters are tough but cute at the same time, and the animation is wonderful.

As you travel around looking for monsters to kill, do not overlook the many jugs, jars, and bottles that may contain coins when you hit them with your weapon. Also hidden around nearly every level is a chest full of coins, and maybe more.

As you increase your characters level and skills, the danger grows, but so do the rewards. Every so often, you must fight a Boss in order to advance. Boss fights are tough, but you can do it. Just remember to take your time, and attack as hard and as often as you can without getting hit too many times in return.

One thing that surprised me was the real time weather. Yes, if it is snowing in your area, raining, etc., the game will have the same weather as your real world. In addition, the game can reflect the time of day as well. These options can be disabled if you do not desire to use them.

You will have many hours of fun playing this game. From the colorful characters to the intense battle scenes, this game is packed with action and adventure. Oh, and did I tell you it is free? Yes, free and waiting for you today. Download it today, and enjoy.