Q: Why should you never be rude to a jump jockey ?

A: In case he takes offence.

There are millions of ways to `offence` the jump jockey, and not participating in the betting at the race track is one of them. Knowing that it is very risky and dangerous to be at the race track during the pandemic, Chris Handy the maker of Spy, Bus, Dig and Gym among others has developed Long shot: the dice game to wrench our thirst of cheering and betting for our Sherbet. 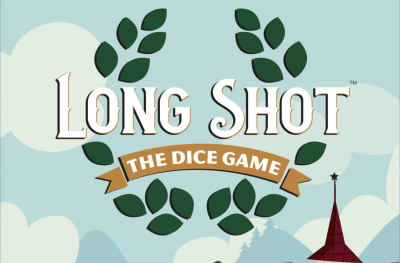 There will be an eight-sided dice – aka horse dice – representing for eight horses and a six-sided dice – aka movement dice – representing the horse movements. The turn starts with a player rolling two die for the horses to move. The horse with the number matching the eight-sided dice will advance the number of steps that are on the other dice. When a horse moves, it will also allow one or more horses to make exactly ONE movement. This is called secondary movement. After the dice rolling phase, each player will have to perform one action, starting with the player rolling the dice.

There are five different actions, and they all offer different values depending on how risky, adventurous or cautious you are. Note: regardless of what action players take, it always depends on the result of the horse dice.

As stated above, every player will have a 4×4 concession board with 4 random numbers crossed out for them. In Concession Action, players can mark one of the numbers that match with the horse dice. They will gain a certain bonus if they can complete any row or column in their concession board. These bonuses include advancing the horse(s), pushing the other horse(s) back, collecting money, having free bet, or triggering other actions.

The Concession area: where players can mark the number – top and the bonus if they complete any rows or columns

Before introducing this action, players should be aware of a red line before the finish line. This is called the `no-bet line`. When a particular horse passes this line, no one can bet on that horse. Unless, they have marked that horse’s number on the Helmet column. In other words, taking Helmet action will let users cross the number that matches with the horse dice, allowing them to bet on that horse even if it crosses the no-bet line.

Betting is a really straightforward action. Players can bet up to $3 on the horse that matches the number rolled on the horse dice. They will subtract their own money, and add that amount to the betting area. At the end of the game, this is the amount they will use to calculate the final scores

If the player has enough money, they can buy a horse that matches the number on the horse dice. However, there is a catch. Players cannot buy the horse from others. They can only buy the available horses, and the horses must not cross the finish line yet. Owning the horse(s) provides players with different abilities. Some horses have special abilities when being bought, while the others have special effects when another action is triggered. Not only does it provide extra power to the owner, owning the horse can also help players to earn a hefty sum amount of money if the horse finish within the top three. 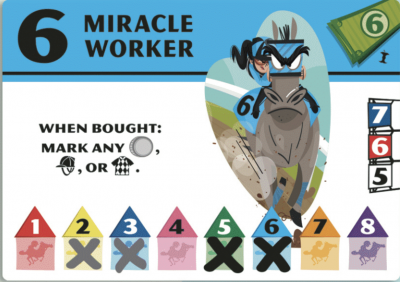 Miracle Worker lets player who bought to mark a Concession, perform a Helmet or Jersey action

The game will end as soon as three horses cross the finish line.

One thing I really like about Long shot: the dice game is the depth and complexity that this simple game offers. Betting, without any doubt, is the most effective way to earn money; but it is not the only way. Players can start building up the money by fulfilling their own concession, or owning the horse as well. Speaking of the concession, there are two perceptions that I can think of. First of all, it can be used as a main source of having early advantages in the game. Players can totally build up their money, manipulate the race, or trigger other actions. On the other hand, it can also be used as a filler action. In order to benefit from the Concession, players have to finish a row or a column, which requires the help of Lady Luck.If it already requires luck, players can totally start building their setup with other actions first. The Concession is one of many unique features that makes this game stand out against other betting / racing games.

Another feature that I am looking forward to is the horse acquisition. This carries the idea and the theme of the game in a fascinating way. Players will have to take a long shot, believing the horse that they bought will be the winners of the race. Buying horse(s) also provides players with extra ability, so the investment might pay for itself. However, it can be a risky investment since instead of using that money to buy the horse, they can totally use it to bet on them instead. But again, players can test out their Mind of Steel, and how vigorous their heart is with this long shot investment. Note, it is not easy to collect more money to use in this game.

In the end, I personally think Long Shot: the dice game is a very good addition to every game group from a family game night to a filler before the hard core games. Especially with 8-player support, Long Shot: the dice game can also be a party game, or even an ice-breaker game. The rules are clear and straightforward. The illustrations are very user friendly and literate, which helps players to understand and follow the game. Unlike Camel Up, where the results can be calculated by odds and chances; Long Shot: the dice game lets players strategize, sabotage, compose different plans, and cherish the moments to walk out of the track as a noted racing tycoon. Will your strategies and tactics help you claim that status or will you need the smile of Lady Luck on your side? 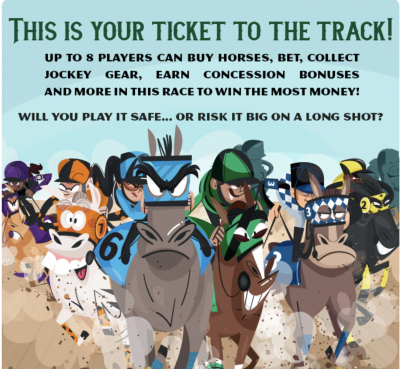 Long Shot: the dice game campaign will end on April 24th 2021 at 7pm CDT. Here is the link to the campaign.

You can also explore more Perplext games here as well including Roland Write: The Dice Game too!