Looking for a gateway game to get into board games? Wondering what you should try out next after sessions of trading sheeps for stones in Catan? Then you come to the right place! Let’s check out the review for Lords of Waterdeep – a game from Wizards of the Coast.

Similar to any other hobbies out there, newcomers need the right gateway games to start with. A solid one can totally blow you away and introduce you to the whole new world. A game that is simple and easy enough that you will not fall asleep when learning the rules. Something presents popular mechanics in a painless way. A system that is not too solitary. There should be enough interactions so it does not make you feel like everyone is playing their own mini-games. A game where you can feel the adrenaline in your veins when you are about to complete a grand move. Especially a grand move which you have been planning on for the last few turns. Lords of Waterdeep can totally serve that taste.

Waterdeep – The City of Splendors – Awaiting for its Greatest Lord 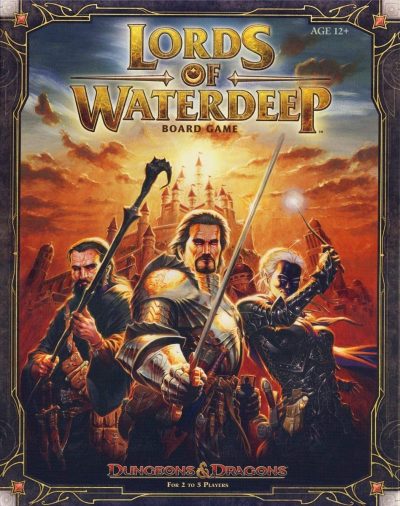 In the City of Waterdeep, players will take the role as one of the eleven Lords, try to overtake and control the city by scoring the most Victory Points over the course of eight rounds. The basis in attaining these Victory Points is to complete as many Quests or score high-point Quests. You as the Lord will delegate your Agents to different buildings to recruit types of Adventurers, collect Gold, get Quests, or construct new buildings. There are four types of Adventurers including Wizard (purple), Fighter (orange), Cleric (white), and Rogue (black). Lords of Waterdeep introduces players the two core mechanics, which are worker placement, where placing the workers to a specific location in order to trigger an action, and contract fulfillment.

The game does have limited buildings in which the Lords can send their Agents into; thus, you must learn to wisely pick the building efficiently. Beside completing the Quests, the player can manipulate the game to his/her advantage with the unique Intrigue ability, which we will discuss in the session below. Keep in mind, all Lords have the same capability and it can get intense as the feud of the Lords begins. The game will have many clashes, interactions, and each Lord’s unique end-game bonus making it challenging for players to claim the throne in the City of Splendors.

As I’ve alluded earlier, the Lords, who do not possess unique power in this universe, have unique end-game bonuses that can change the game. This can range from having the bonus as the number of buildings owned to matching the two different types of completed Quests. The type of Lord and his/her end-game bonus will be hidden making it intensely strategic trying to guess each other’s Lords, especially if you are trying to hinder your opponents. We also have the active Quests, which are not hidden. These Quests will display the types of resources (Adventurers, Gold) required and type of Quests. There are five types of Quests (Arcana, Piety, Skullduggery, Warfare, and Commerce). As the game progresses, you can keep track of your opponent’s active Quests, which may offer clues as to what they are specialized in as well.

Now, I am all about sabotaging my fellow Lords so here are the insights/ways that you potentially cause a headache to your opponents. Lords of Waterdeep’s buildings express the scarcity and the pain of recruiting the rarer Adventurers. Thus, by sending your Agent to an in-demand building by other Lords, you will, for sure, start a quarrel. For instance, if you notice your fellow Lord is trying to complete their active quest by getting a Wizard, you may ruthlessly send your Agent to the Blackstaff Tower and block her move. This will force her to wait till next round to get this Adventurer. This intentionally creates a race for Lords to compete for the building space, especially when there are more Lords in the game. With this limitation in recruiting specific Adventurers, or getting resources, on the board, the Lords will have to find alternative ways to recruit those by constructing new buildings or start prioritizing which active Quests they want to complete first. Completing the right Quests can also reward the Lords with extra resources as well. 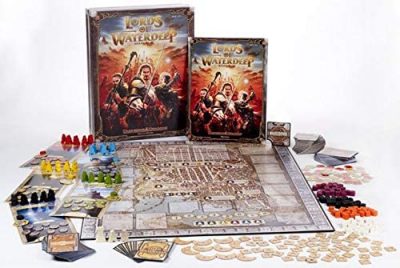 My second sabotage move is to “hoard” Intrigue abilities. These Intrigue cards are pretty fantastic in hindering/penalizing the other Lords or aiding your own Lord. However, my most favorite one is the infamous Mandatory Quests, which is given to the targeted Lord. Basically, I am forcing my opponent to complete this Quest and to use up his Adventurers before he can complete his grandeur twenty-five- points active Quest. Another worse news for him? This Mandatory Quest barely gives any Victory Points and also does not belong to any Quest’s type that can be utilized in the end-game bonus. It is considered as a trap card for the opponent. By all means, there are Intrigue cards in the stack that are meant to benefit yourself or share Adventurers/ Quests among all players, called Utility, so receiving the effects of Intrigue cards are not all that dreadful. Utility cards can include getting additional Adventurers, Golds, or Quest to use to your benefits and it allows the Lords to get these benefits without wasting an Agent to go to a specific building.

Beside sabotaging others, Lord of Waterdeep also offers means of synergism among players. When a Lord intends to construct a new building (either obtained directly from Builder’s Hall or indirectly from Quest/ Intrigue card), the building is shared with all the Lords. The Lord that owns the building will get passive benefit any time their fellows enter the building. Although the building owner’s benefit generally does not compare to the gain obtained by the one entered into the building, it resembles the concept of paying taxes or interest to use someone else’s building. In terms of strategy though, it allows the player to predict which buildings will be the most desirable and then buy them early in the game to accumulate the benefits. 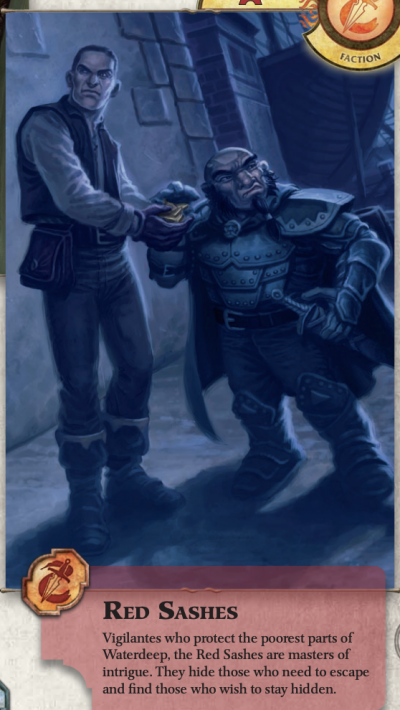 The Charms from Battling for the City of Splendors

Lords of Waterdeep is not a type of game which you finish and leave the table. It is the kind that players will take a long exhale. And then, they will be gratified by what happened in the City of Waterdeep at the finale. Lord of Waterdeep is not a component-heavy game. It does not requires players to remember all the crunchy prerequisites and exceptions to play it. This allows newcomers to board games to ease into a worker placement type of board game without being overwhelmed. You can focus and build up your own engines in the game. It is not the same type of the engine in heavy-engine building games like Race for the Galaxy or Terraforming Mars. In fact, it is about organizing and figuring out the chains from all the actions in the game. By constructing the right path, players can be flexible in completing active Quests and scoring Victory Points. I can’t fathom how many times the chain reaction happened when I played this game. Most of the time, it was due to gaining rewards from Plot Quests and normal Quests. For instance, when Aurora’s Realms Shop is occupied, I can complete the Spy on the House of Light Quest to earn six golds instead. Not only does this flexibility offer alternative routes, it is also smoke and mirrors for which Lord the player owns. When partaking in this approach, players do not need to focus on the Quest type. Instead, they will focus more for the immediate rewards, to create or be a part of a chain reaction.

Lords of Waterdeep performs a spectacular job beyond being a basic Worker Placement 101 game. It shapes newcomers into the mindset of executing tasks effectively. Which building should they go first to recruit the Adventurer(s)?How about what they should construct in the Builder’s Hall? What about the Quest should they pick in the Cliff Watch Inn? While the Lord can plan ahead for a couple of actions, the journey is not always effortless. With such limited spaces and Agents, you will have other Lords trying to compete for the same resources that you want in that round. Everyone else is in ready mode to compete for the same thing that you want. They can hinder you from performing an action, to progress on their path as well – the literal killing of two birds with one stone. This means that if you want to be ahead in this game, you have to plan out the move deliberately. Also, you have to know where to place your Agents to set up an advantage for the next turn. It sounds easy but this involves strategic planning along with right timing execution.

An adequate amount of player interactions

The battle for the most powerful Lord can’t be complete without player interaction. For the sake of comparison, this game is not as heavily in player interaction as Catan. However, it keeps players engaged enough to not be a solitary game. A form of interaction players slow each others’ progress down by blocking. One of the most popular blocking techniques, as you might know, is occupying the right location. It enforces other Lords to find alternative solutions. Players can also directly perform “Take That” type of action in multiple ways. They can use the Intrigue cards – from attacking directly to the pool of Adventurers, to blocking others with a Mandatory Quest to use up some of their Adventurers. The damaging effect might be pretty minimal, but it is enough to sabotage someone else’s plan. This is actually one of my favorite factors in the game. With these interactions among the players, the game brings out the character in each player as well as their approach. It makes the atmosphere of a game night more vibrant and lively. You wont experience an awkward silence when everyone just plays their own hand. 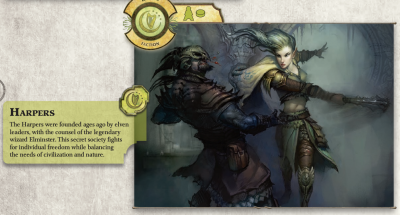 Lords of Waterdeep is one of the few games that I still keep with me for eight years span. The game itself has very high replay value. It offers many glamorous perspectives and concepts. The game rules are simple, concise and accessible. But at the same time,  the gameplay is deep enough to keep everyone pondering every single turn. The sufficient amount of interaction, and the constant changing game state let all the players engaged in the game. The strategies and tactics are not too heavy nor too tight. Indeed, it is flexible enough for players to achieve their goals. Thanks to Lords of Waterdeep, many of my friends have a different look and impression about board games. I strongly believe that this game is one of the best gateway games to introduce (or even entice) people to the world of board games generally, and worker-placement games specifically.