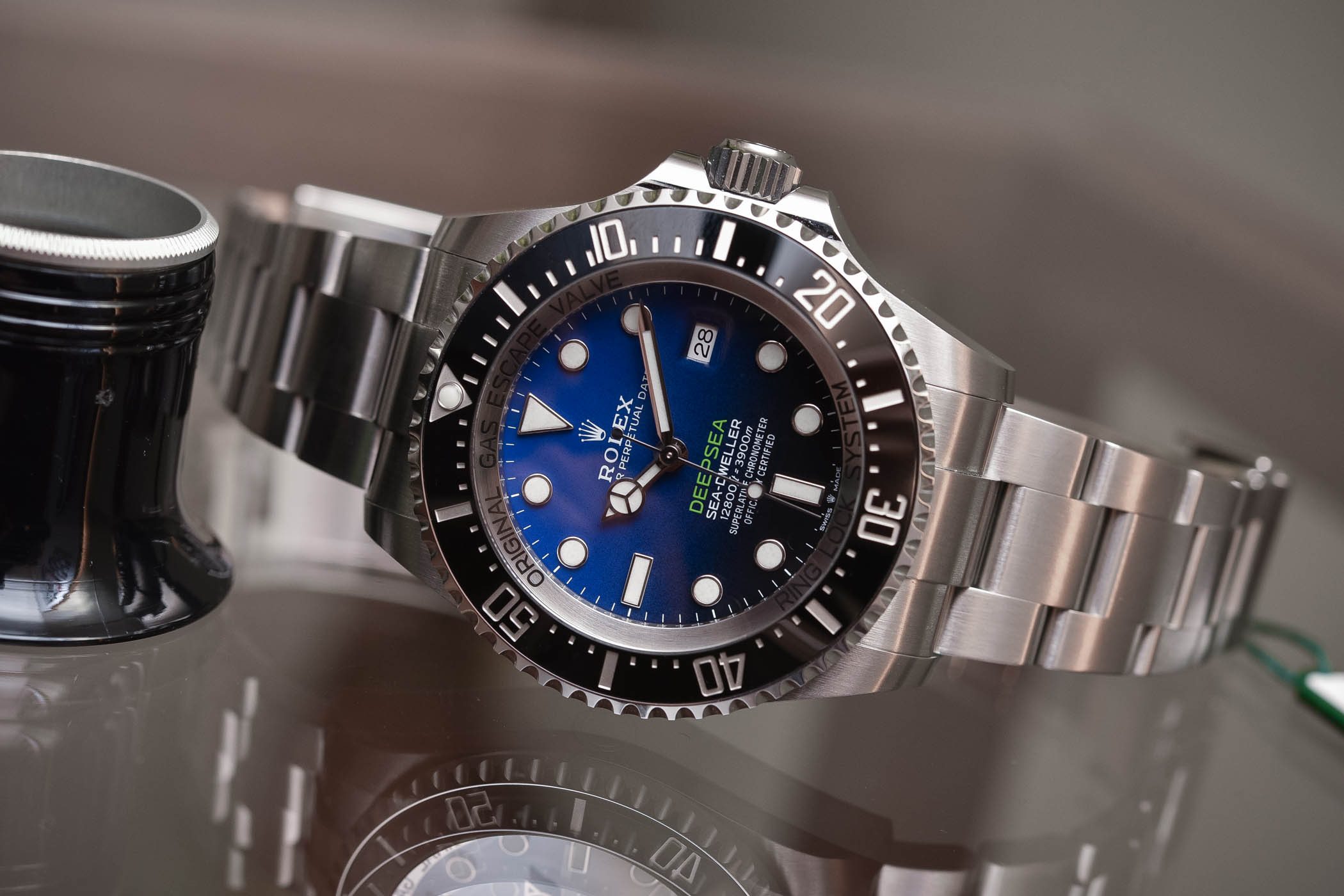 The Rolex Deep Sea has been updated once again this year with the Sea Dweller 126660 Deep Sea Blue. For the most part it’s all small, but very sharp visual upgrades. Many of them in fact, are hard to notice to the casual watch enthusiast. The biggest change in my mind is the switch to the 3235 movement. This is an existing movement, but a new addition to the Deep Sea.

The hype from Basel World was focused so much around Pepsi and Root Beer GMT Master II models, that the Deepsea revamp has been pushed to the wayside. No huge changes, alternations or additions to the line. That’s not always a bad thing however. When something works, it doesn’t always need an update solely for the sake of updating. That is not something every manufacturer understands in the watch world. It’s something more companies should realize.

The bracelet of this Rolex Sea Dweller is noticeably wider now, creating a much more symmetrical watch. There’s less of that “Gigantic Rapper Watch” feel. At 44mm wide, it’s still very thick – in fact, the largest watch that Rolex currently makes and still the deepest diving watch they have available.

It’s got weight, like a Submariner on steroids. It’s not for everyone. You really need to try it on and see if it fits your wrist. It is a heavy watch. I love the heft, I love the feel, but you can tell you’re wearing a watch. A Yachtmaster II is the same size, but the 126660 is taller. You really need an eight inch wrist for it to sit properly. It’s not going to work with smaller forearms.

Rolex has also changed the lug design with a barely noticeable slightly rounder taper and minuscule size adjustment. We’re talking millimeters thinner than the previous versions of the Deep Sea. Like life, it needs to be balanced out. To accommodate for the smaller size, the bracelet has been made wider by about the same, with again, a slightly strong taper to account for it.

That means micro adjustments to the Oysterlock clasp as well. You still have 904L steel with increased chromium content giving you a Corrosion-resistant band, designed specifically for use in the water. Instead of the patented Rolex Glidelock clasp, which allows divers to expand the band to 18 mm in precise 1.8 mm increments, we’re now up to 2mm adjustments. The Fliplock extension links are still present, allowing the band to be adjusted by an additional 26 mm, allowing for a comfortable fit over a dive suit. Because everyone wears a Rolex over their Dive Suit.

Sporting a two toned gradient, the face transitions nicely from a deep blue to a stark black. With the Deep Blue name in green, it’s been dubbed the “James Cameron” edition. Rolex is also producing it in the traditional black Deep Sea.

The Green is actually the same color and hue for the actual submarine used in the referenced dive attempt.

The text placement itself is also different on the 126660 Rolex Sea Dweller with the “Deepsea” wording placed right above “Sea Dweller” underneath the connection point of the hands. Alternative, the black faced version places a smaller “Deepsea” in the other direction – over the connection and under “Oyster Perpetual Date.” Both look great. There’s no clear winner, and it comes down to personal preference.

You might remember the 11660 Deepsea which is cycling out of the current lineup. It featured one of Rolex’s most hotly debated features of the line – the silver rehaut ring hat. Yes, that silver rehaut ring was either loved, or hated. The dial has two text strings: “Original Gas Escape Valve” (referring to the automatic helium release valve) and “Ring Lock System,” which is a reference to the actual case construction that produces the huge water resistance level. The silver ring is actually a core component of the ring lock and is in the words of Rolex itself: a “high-performance nitrogen-alloyed stainless steel ring.” The same features are continued with the 126660 Deepsea.

For me? I love it. I get why people think Rolex was being obnoxious by sporting the names of what are essentially core components of construction. They would rather see the rings blank. I like it though. It fits and does nothing to subtract from the overall aesthetic. If anything, it creates a more rugged, sturdier feel.

Like I mentioned, the real change is the heart of the watch. Beating inside the 126660 Sea Dweller is the Perpetual Calibre 3235. Used in last year’s Sea Dweller, and also seen on the newest Day-Date and Datejust series. Like usual I’m not sure where Rolex’s engineering department and their marketing department differ. The watch boasts patented “Chronergy escapement and Parachrom hairspring”. Claiming a natural resistance to magnetism that is ten times less venerable to shock and drop related precision issues. You’re also looking at higher efficiency. A seventy hour power reserve, showing a forty percent increase over the fifty hours from the Calibre 3135 equipped Deepsea.

The Calibre 3235 in the 126660 also meets the standards of Rolex’s new certification process. I’m not going to go into the engineering requirements, but it means the watch runs at plus two seconds per day and is covered with the usual five years warranty.

Did I mention the watch boasts on of the deepest water ratings yet? Let’s be real though. I highly doubt there is a single person on the planet who will take this watch to 1,000 feet underwater – let alone to maximum of almost 13,000 feet. The Rolex Deepsea Sea Dweller 126660 has 3,900m of water resistance thanks to case construction most common with actual submarine design than watch design. Maybe if you’re an underwater welder who just wants to prove a point. I don’t know.

Dealers are having trouble getting inventory for this edition as well, with the watch already fetching well over retail. While it’s being passed over by more hyped watches, I think it’s a great addition to the line with a high likelihood of collectability over time.

Plus at the end of the day – if you’ve got the wrists to pull it off, it’s simply a badass watch.