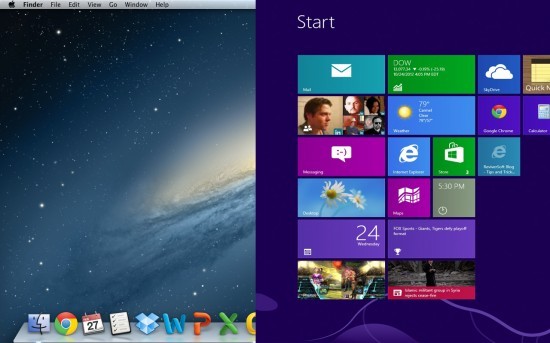 I’ve been a Mac user since 2010 and I haven’t looked back in over three years – until recently. Ever since Windows 8 was released last October, I have been catching myself saying the “W” word (it’s frowned upon to say “Windows” when you’re part of the Mac cult) and “I want” in the same sentence. All bias aside, the Windows 8 start screen using the same live tile layout as their mobile OS was a very risky move for Microsoft. However, I think they hit the nail square on the head – I like it!

I’ve been following Windows 8 ever since bloggers first started reviewing it and I’ve been seriously considering ditching my three-year-old MacBook Pro in exchange for a Samsung ultrabook running Windows 8. Here’s why:

My biggest complaint with Mac OS X (and iOS for that matter) is that the user interface never changes. iOS has looked essentially the same since 2007 when the iPhone was introduced and Mac OS X has looked very similar since 2001 when OS X Cheetah was released. Granted, they have polished the interface and smoothed out some of the rough edges since 2001, but for the most part, it works the same way: dock of icons at the bottom of the screen, menu bar at the top, the red button closes the window, the yellow button minimizes the window, hard disks appear as icons on the desktop, etc.

If you look at Windows, the user interface looked essentially the same since the days of Windows 95. However, over all those years, they would at least change the color scheme with Windows XP and introduce the “Aero” UI with Vista. Apple has maintained the same grey color scheme since the very early days of Mac OS X.

My favorite part about Windows 8 is that they drastically redesigned the whole interface. The UI (codenamed “Metro” when it was introduced with Windows Phone) is a modern, sleek design that looks nice on any size display. It’s really a step up from Windows 7, which looked very similar to Windows Vista. Microsoft’s message with the new Windows UI is clear – they are ushering in a wave of tablets, hybrids (laptops that convert into tablets), and touch screen computers. I believe the touch screen to be far more efficient than using a mouse or trackpad, but it would be awkward to use Windows 7 because it’s built to be used with a mouse… Windows 8, however, is touch-based in nature which means it should stand the length of time on Microsoft’s lineup of operating systems (similar to what XP is doing now).

Apple Is Perfect, But You Have No Freedom

After three years with my Macs, I can proudly say that they have never frozen up or gotten to a point where I had to do the Mac equivalent of CTRL + ALT + DELETE. The operating system is absolutely flawless in this regard, but it comes at a price: Apple gives no freedom.

With the introduction of the Mac App Store a few years ago, it “revolutionized” the way Mac applications were downloaded. Before, you had to search the Internet for the application you want, find a reputable website such as CNET, download it, and install it. Now all you have to do is open the Mac App Store, search for “Evernote,” and click download. The App Store is great and all, but it limits the users a lot. I’m used to buying big, high-priced software (such as Adobe Photoshop CS6) on websites like eBay or Amazon where people are selling their used copies. With the introduction of the Mac App Store (and the fact that Apple is removing the optical drive from newer laptops), less people are buying the Photoshop CS6 disc, which means there are fewer used copies online for me to buy.

In addition to the Mac App Store controlling the third-party software world, Apple controls the hardware as well. When you buy a Mac, you have a few choices. The first choice is simple: laptop or desktop. If you choose laptop, you have a few more choices: MacBook Pro or MacBook Air and the screen size that you want. If you choose desktop, you can either pick a Mac Mini, iMac, or Mac Pro… That’s it! In the Windows world, you can choose from tons of brands (Sony, Toshiba, Samsung, Dell, HP, etc) which all have many models of PCs. I’m not complaining that Macs are ugly (which they obviously aren’t), but I am complaining about the fact that not only do you have no choices, but the laptop models look generally the same every year. In fact, the current design of the MacBook Pro hasn’t changed since 2008 – they just keep upgrading the inner specs.

On a Mac, the only user-upgradable components are the RAM and the hard drive. In later models, though (such as the MacBook Airs and new Retina MacBooks), the hard drive is very hard to replace without damaging the computer permanently because Apple has attached components directly to the case – if you open it up, you’ll crack them. For most users, they will never even notice that they cannot upgrade (or repair) any of the components themselves. Power users, on the other hand, get very upset about this because they want to be able to upgrade their MacBook and use it for many years instead of buying a new Mac. I recently bought 8 GB of RAM to upgrade my MacBook from 2 GB to 8, but that’s as much upgrading as I can do. In a few more years when my computer starts running slow at 8 GB, I’ll just have to get a new one.

When I first bought my iMac in 2010, it came with the new Apple Magic Mouse. The Magic Mouse featured no tactile buttons, no scroll wheel – nothing. It was simply a Bluetooth-powered, curved white slab that you glide your fingers across to scroll, make your web browser go back, zoom, etc. To say the least, the Magic Mouse is really cool and it was first of its kind (since then, Microsoft, Logitech, and other companies have copied and made similar products).

A few months ago, I was in Staples looking to buy the Logitech K750 Mac keyboard because it was solar-powered. I was constantly dumping AA batteries into my Apple keyboard, so I wanted to go with something more economical. When I was there, I dared venture into the land of Windows peripherals and started testing some of the ergonomic mice. When I got to the Logitech Performance MX mouse, I was blown away. It conformed to my hand perfectly – making it one hundred times more comfortable than the slim Magic Mouse. I bought both the Logitech keyboard and the mouse and ditched my Apple peripherals on eBay. I can definitely say that the “coolness” factor of the Magic Mouse wore off when I used something more functional.

Other than the fact that I’ve gotten a little bored with Apple, I can live with the other problems. When I decided that Windows 8 may be a good idea, I started doing more research and decided against it. Many reviewers claimed that although the UI is nice, it’s awkward transitioning between the “Desktop” and “Tiles.” I don’t like to feel awkward when I’m using my computer, so that was an instant turnoff.

In addition, I think I would miss the seamlessness of Mac OS X. When I bought an Android phone to replace my iPhone 4 (I wanted Android because it was more open – for the same reasons I considered Windows), I regretted it because it was so choppy compared to iOS. Doing simple tasks such as opening Calendar or taking a picture caused lags and crashes, which can irritate anyone used to the almost-perfect iOS. When the iPhone 5 was released, I ditched my Samsung Galaxy Nexus and bought the iPhone.

Although Windows 8 looks nice, I think I’ll stick with OS X for now. I know for sure that the operating system is rock-solid, I’m used to the way Mac applications work, and it’s essentially seamless. If I can get over the fact that it hasn’t drastically changed in years, I think I can live with it.