Whether you’re stuck in the middle of some crappy company’s boot logo while rooting your device or doing customization, these 5 Android terminal commands are those that every Android user must be aware of. In fact, it might just save you from wasting extra bucks by allowing you to recover your Android device at your home instead of bringing it down to a service center. Besides, some of these Android terminal commands would definitely help you if you’re that one fancy character who loves to get his hands dirty with command lines. 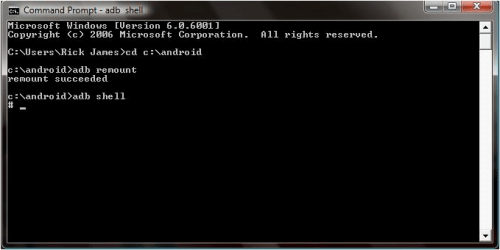 Things might seem bit easy if you’re a Mac or Linux user. The first thing you will need to do is to install the SDK as mentioned on the Android Developers site. However, if you’re trying to get these things done on Windows, you’ll be required to follow the steps that have been mentioned below.

ADB devices command is the most essential and important command as it is used to make sure that the computer and Android device are communicating seamlessly. In order to run the very first command, you’ll need to link up a new directory with the Android tools folder (which you downloaded earlier). Windows users can make use of one shortcut trick by pressing shift + right mouse key simultaneously and opening command window right there. However, Mac and Linux users will have to go through the process of manually navigating to the respective folder.

Let’s assume that you wanna move a file onto your device but you want to so by using some Android terminal commands. This is the situation when ADB Push command would be used. However, you should be aware of the full path of the source file and destination folder. For simple management, copy any file to the android-tools folder so that we won’t be required to remember some other fancy path. Now, switch back to command line and enter “adb push your_file_name.extension /sdcard/Media/”.

This will put that file into the Media folder of SD card. Notice one thing here, We placed source file in the android-tools folder and therefore it wasn’t necessary to specify the full source path. If you would be having that file somewhere in other drive, you would be required to enter the full path as something like this:

It is quite understandable that if the adb push command is used to move the files, adb pull command will be used to take the files out. Similar to the adb push, you’re required to know the source and destination path. Let’s have a look at the syntax and how to use it.

This command will put the file into the android-tools folder on your PC or Mac.

As the name suggests, the “adb reboot” command is used to reboot the device from command line. I know that it’s quite easy to reboot your device via power key but the command comes into picture when you need to try your hands on scripting. This command can be used in between scripting to automatically reboot the device.

Remember to put the .apk file in the android-tools folder otherwise you’ll have to specify the full path.