After decades of apocalyptic events, general resources are getting scarce. Citizens of Plaka have to manage their best to survive day to day. They have to keep their hope up, by acquiring more permanent resources, for a better and brighter tomorrow.

Welcome to The Market | A Pocket Game, where you will experience the daily struggle of going to the market in the year of 2121. Your main goal is the first person to gather 10 Hope before anyone else does. 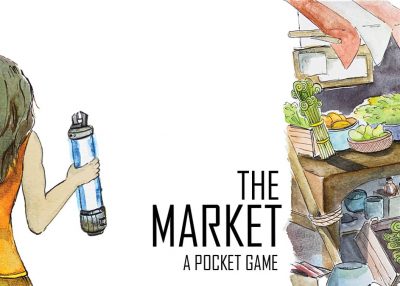 At this time, the people of Plaka only focus on three main resources: Synthetic Light, FiddleHead, and Compost. These are the main resources of the game. At the beginning, each player will get one resource tracker for each resource type. The resources are very limited during this time. Hence, players can never get more than 3 temporary units for any types of resources. In order to use these resources, players will rotate the corresponding resource tracker(s) in front of them. During the turn, there are a total of 3 available actions, and players can only perform one of them:

The game will end as soon as one player finishes collecting 10 hopes. That player will have the highest Hope to survive through this crazy and chaotic time. 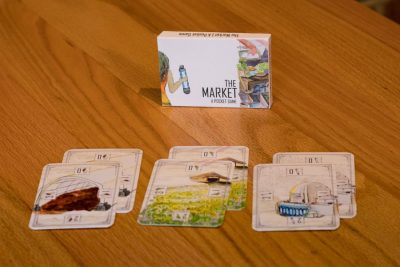 Secondly, the game packs with lots of perpetual thwarting actions, especially when players reach the temporary resource limit. Each player has to read the situation of the game so that they won’t take any action benefiting the others. Exploring another card is good but what if you cannot buy it ? Your opponent reveals a card that they can buy next turn, should you get it ? Players have to constantly adjust their tactics to adapt to the situation at the market. ADAPT! IMPROVISE! OVERCOME!

In addition to all the sabotaging actions, the game will give players lots of palpitations, especially during the Explore action. Is the amount of resources an active player has sufficient enough to perform Exploring ? There is no one but the Lady Luck knows. If players somehow upset Her this turn, their best shot is waiting for another exploration turn.  Meanwhile, there will be players with just the exact right amount of resources, who can still scarp something out of the Market. Well, that’s how life is. 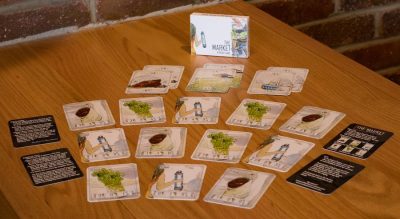 All the cards in The Market

Even though The Market is a push-your-luck game, players can still manage to win the game by building their own engine. The juxtaposition between luck and skills is well balanced in this game. Players can aggressively push for cards with Higher Hope points and wish for the right cards to come out. On the other hand, they can patiently build up their engine to build up their resources. This might sound very similar to the world phenomena Splendor, but there is a very unique touch in it: the scarcity of resources. Not only is the amount of temporary resources limited, but also the amount of permanent one as well. There are only 12 of them total in the whole game. Players have to wisely plan to get the right one matching with what they have.

This game will not come with fancy sets of tokens, nor any meeples. However, with 18 cards, and 5 minute per game play, this game will satisfy the desire of any light strategic players. It is heavy enough to give players some nerve-racking times, which might end up in “What did I just do” moments. At last but not least, this will also be a good gateway game for newcomers, who want their feet wet in more strategic games. 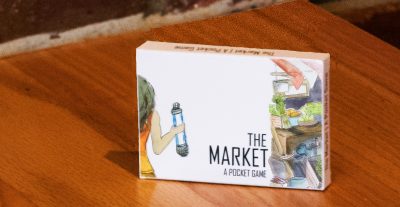 The project will be launched on Tuesday, May 11th, at 12:30 CDT. Here is the link to the Campaign.

You can also explore more previous project by Wesley Cone at this link.