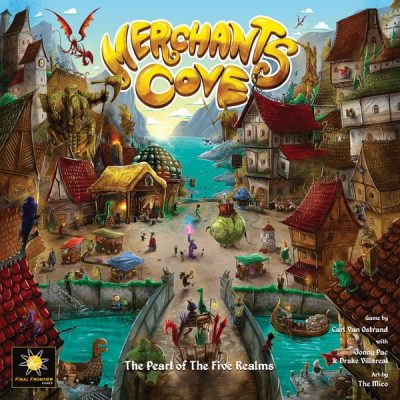 2021 welcomes the newest game in the Five Realms universe – Merchants Cove. In the game, the player will play as one of the merchants in the Five Realms. They have 3 days to sell a lot of goods, and bring in as much profit as possible. Because it is an asymmetrical game, each merchant will have a completely different way of playing. So, each player will have their own action and production system. 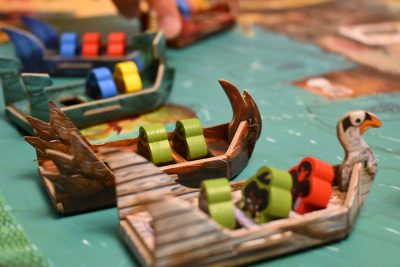 In Merchants Cove, the map is divided into 3 areas: the harbor, the town hall and the lap clock. At the harbour, there will be a certain number of boats. Each boat will contain a different amount of adventure. There are a total of 5 types of adventures, and 1 type is rouge. The harbor is where the boat will dock when there are enough passengers. When all the docks are full, that’s the end of the round.

In the main court, the player can hire villagers to gain more of their power. In addition, here is also the center of different types of adventure. At the end of each round, if they can’t get to the port, adventures will gather in the same area as them.

Briefly about the game, players will take turns doing actions to produce goods. There are 4 different types of goods, representing 4 types of adventures. Each item has 2 different sizes, large and small. Every action the player takes affects the time circle on the map. Over time, the player gets more adventures to put on the boat. When the time runs out, it’s time to end the round. If the time is not over, but the boats have docked, the round is over. 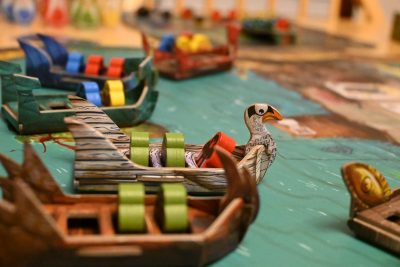 – Super nice graphics and composition. Painted textures and attention to the smallest details. The tray also has its own instructions for stacking ingredients.
– Extremely attractive boat booking and docking system. This is the climax of the game. Players can help each other, sell goods, or can stop other players
– Very interesting asymmetrical mini-puzzle systems. Each player has a different motivation to focus on producing, and optimizing their actions.
– Reasonable and balanced game time with game play. A game (2-4 players) falls in the 70-100′ range. The game is not too tedious. Players really have to optimize their actions so as not to be disappointed when the time runs out. 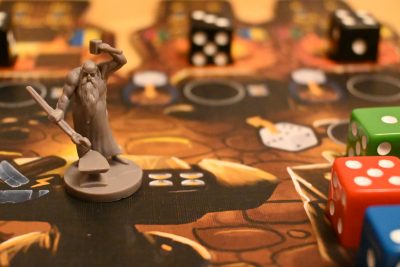 – The map is big and beautiful, but there is too much dead space on the map. The map is completely shrinkable.

– The game has no relationship between players. Throughout the game play, each player will focus on the engine – his mini puzzle. Puzzles are only linked by the amount of time each player spends on the clock. So, instead of playing with other players, it’s easier for players to feel like they’re playing with the game.

– The Rouge card is unnecessarily complicated. Rouge card is considered as a form of deduction card. However, there are a few cards that give points (?!) This greatly affects the end of the game.

– The game has an element of luck at certain times. From how adventure appears on a boat, or how to draw rouge cards, or roll the dice of some characters. This affects the player’s approach to the game.

Merchants Cove did not live up to its expectations. The game lacks player-to-game interaction, player-to-player connectivity, and replayability. Merchant Coves is really difficult to satisfy the taste of experienced players. However, with a lot of emphasis on eye-catching form, as well as not too complicated rules, the game easily impresses the gongs of art, as well as casual gamers who want to learn about how to solve mini puzzle in asymmetrical game. 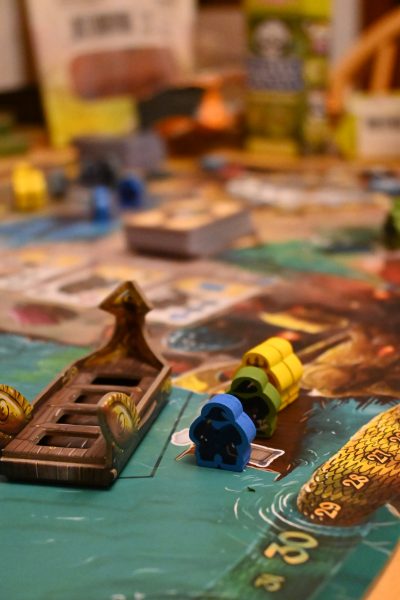 You can purchase Merchants Cove at this link