Moscow – March 26, 2019 – Deep Silver and 4A Games are happy to announce the release of the Metro Exodus “Ranger Update” today for Xbox One, the all-in one games and entertainment system from Microsoft, the PlayStation® 4 computer entertainment system, and PC. This free update adds a host of new features, implements improvements across the board, and addresses numerous bugs and issues. 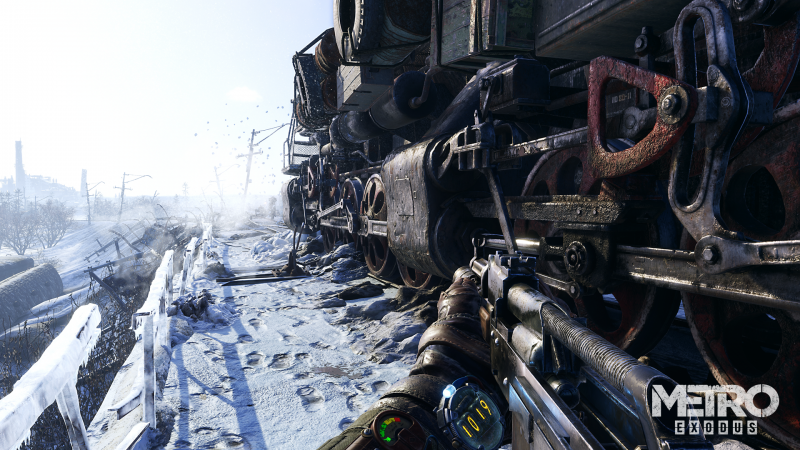 Among the added features is New Game+. This mode adds a new dimension to additional playthroughs of the campaign by offering comrades an upper hand during encore adventures. New Game+ grants players access to all weapons and attachments unlocked through their initial playthrough. The mode also allows players to adjust a range of variables to enhance their own personal and uniquely challenging gameplay experience.

Included in New Game+ is the Developer Commentary feature, which allows players to find special tapes containing discussion from the 4A Games team on some of the design choices informing the enthralling world of Metro Exodus.

4A Games have further refined the control scheme with a new Controller Preset, which improves sensitivity and dead zones. There are also some platform-specific new features and improvements in the update. 4A Games has added mouse and keyboard support for Xbox One, further improved RTX and DLSS support on PC, DualShock Controller Light support for PS4, and many more adjustments.

The Ranger Update also addresses a large number of player-reported issues while also improving gameplay, overall balance, and performance throughout.

To view the full notes for the update, please visit the Metro Exodus website here: https://www.metrothegame.com/news/ranger-update/

Be the first to hear about upcoming Metro Exodus news by registering at MetroTheGame.com, following us on Twitter and Instagram @MetroVideoGame or on Facebook at Facebook.com/MetroVideoGame.

A quarter-century after nuclear war devastated the earth, a few thousand survivors still cling to existence beneath the ruins of Moscow, in the tunnels of the Metro.

They have struggled against the poisoned elements, fought mutated beasts and paranormal horrors, and suffered the flames of civil war.

But now, as Artyom, you must flee the Metro and lead a band of Spartan Rangers on an incredible, continent-spanning journey across post-apocalyptic Russia in search of a new life in the East.

Metro Exodus is an epic, story-driven first person shooter from 4A Games that blends deadly combat and stealth with exploration and survival horror in one of the most immersive game worlds ever created.

Explore the Russian wilderness across vast, non-linear levels and follow a thrilling story-line that spans an entire year through spring, summer and autumn to the depths of nuclear winter.

Inspired by the novels of Dmitry Glukhovsky, Metro Exodus continues Artyom’s story in the greatest Metro adventure yet.

Koch Media is a leading producer and distributor of digital entertainment products (software, games and films). The company’s own publishing activities, marketing and distribution extend throughout Europe and the USA. The Koch Media group has more than 20 years of experience in the digital media business, and has risen to become the number one distributor in Europe. It has also formed strategic alliances with numerous games and software publishers: Bethesda, Capcom, Kaspersky Labs, NC SOFT, Sega, Square Enix and Tecmo-Koei, etc. in various European countries. With Headquarter in Höfen, Austria Koch Media owns branches in Germany, England, France, Austria, Switzerland, Italy, Spain, the Nordic regions, Benelux, Australia, Czech Republic and the United States.

4A Games is a multicultural, multinational video game development studio with offices in both Malta and Ukraine – known for its atmospheric first-person shooters Metro 2033, Metro: Last Light, and Metro Redux.

Established in Kiev, Ukraine in 2005, the studio was founded by a passionate team of game industry veterans with the goal of creating AAA-quality games for current gaming PCs and then “next-gen” game consoles. In 2014, the studio moved its headquarters – along with more than 50 team members and their families — from Ukraine to the island of Malta.

Currently at the heart of the company are over 100 talented designers, programmers, artists, effects specialists, and writers from all over the world with a diverse and unique set of backgrounds – bringing countless years of experience in software development and computer games in particular. To learn more, please visit www.4A-Games.com