About 50,000 fans of Minecraft around the world have suffered from a malicious program while attempting to add mods, maps or saves to their game.  Few people expect to pick up a virus on the official website of their favorite game, and we are more likely to hear stories about how on the Internet you can accidentally infect a computer by clicking on a suspicious link or a third party mod/world site that isn’t extremely popular.

Hackers, however, sometimes are able to camouflage infected files inside jar and zip files they upload to well known sites, so you should be alert all the time for any 3rd party download not from the publisher. Even when you decided to dress up your square character with just a new skin there could be risk.  In fact skins is where this latest trap comes into play. Most of the victims (50,000+ people, according to some sources) are residents of the Russian Federation. The company Avast, which develops software in the field of information security, published on its website the analysis of a malicious utility that infected computers of players.  You can read the source article for more details. 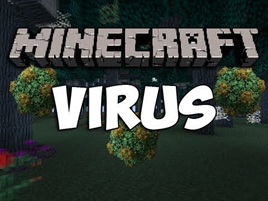 The virus is designed to re-format the hard drive, and it also removes system programs, backups, and judging by the quality of the code, according to Avast it appears to be written by far from experienced hackers. In addition, the victims sometimes received insulting messages on the in-game mail, so that someone, apparently, wanted to simply complicate the lives of thousands of people, rather than get their confidential data.  This latest virus was a malicious Powershell script that happens to use Minecraft “skins” created in PNG file format as the distribution vehicle. A skin can be downloaded to your PC then uploaded to your Minecraft account to change the look of your game avatar.  Skins also get uploaded to the Minecraft site from various online resources that you give permission for them to access your Minecraft profile and replace the skin.

Nevertheless, the phenomenon is extremely unpleasant. Few people expected this turn of events, as they usually download skins from the official site of the game Minecraft Mojang.  Avast already notified Mojang about the issue.

You need to be 100% sure of the site where you download files from and this would apply to anything and not just Minecraft.  Do not download Minecraft skins from unfamiliar sites and double check/scan download with an anti-virus program before you open or install one. One of the tested and secure Minecraft skin sites is skins4minecraft. It provides a huge selection of skins and, most importantly, complete security for your computer according to the site.  Players need to be extremely careful, not to ignore messages and warnings of the computer’s security system, downloading files even from official sites.