Note, that I originally had issues because the Android phone gave me 3 characters and I couldn’t connect to it via Wi-Fi, but checking on the MobileGo FAQ provided me with a solution:

You have to prepend a leading 0 in front of a 3 digit code, they should just fix their software so you wouldn’t have to do this as the average user would have no clue that they had to do this however.

Once you get past that little hiccup you can see your phone version connected to the MobileGo application. 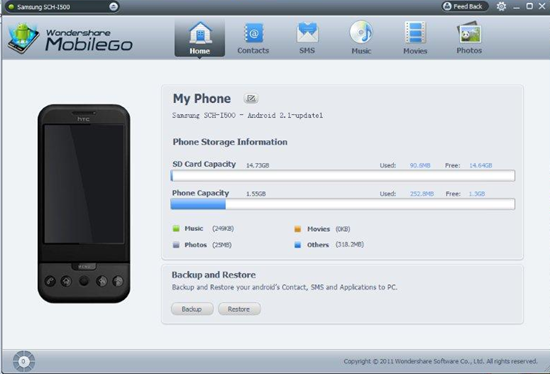 From here you have the ability to instantly backup your Contact, SMS and Applications to your PC via 1 click or do a restore.

If you click on the individual menu options, you have some additional choices. 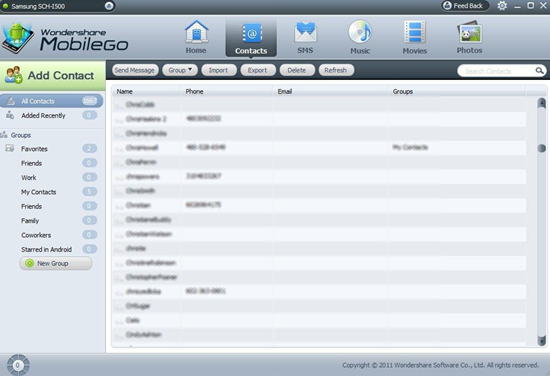 In the Contacts tab for instance, you can label and group your contacts for easy sorting later.  You can also specifically backup or import contacts to your Android phone which makes it easy to transfer contacts from one phone to another or make sure you have a backup if you are about to upgrade or replace your phone.

One feature lacking was that the Contacts in MobileGo can’t separate out your Facebook contacts which show up as your phone contacts.   This makes it very hard to go through your list of contacts and find just the ones you need by default, and they need to add this feature into the phone to prevent backing up Facebook contacts or at least group them separate so you can weed them out.

Backing up photos, movies or video with MobileGo is easy and simple.  You just click on the menu item and click export or import on the specific photo’s or contacts you wish to preserve or restore. 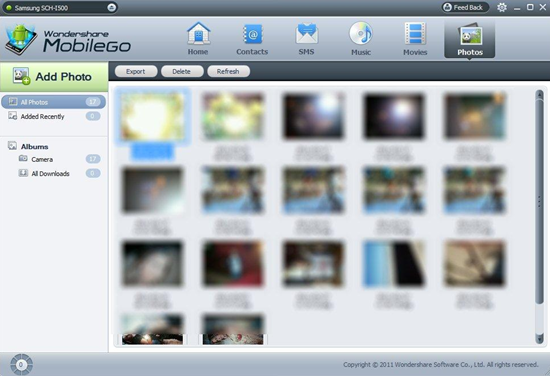 If you take a lot of pictures on your phone this is far easier than having to email them to yourself.

MobileGo also offers SMS backup which can let you backup SMS messages you still have on your phone, you can also use the MobileGo application to send SMS message through your phone so you can type them out on your PC instead of pecking them out on your phone keyboard as well.  There is no cost for this and it just directly uses your phone SMS to send out text messages.  Some people may not like the fact that MobileGo does automatically sync to your phone and MobileGo should probably implement the option to disable the SMS feature for those who don’t want to allow messages to be backed up or restored.

If you are looking to backup your Android phone then the Wondershare MobileGo application is clearly a good solution.  It is completely free and lets you backup your android phone without having to even plug it into your PC if you have a home wireless connection.  It is a little sluggish when you first click on “Contacts” if you have a vast amount of contacts, so the company should implement a way to block or not look at Facebook contacts or some way to separate them out by default.

WonderShare happens to also make iMate an application which backs up your iPhone data to your PC as well.  There is a Special April Fool’s Day offer from WonderShare where they are giving away a copy of iMate to anyone for free for a limited time only! (March 30th through April 2nd)  Hurry up and get your copy of Wondershare iMate if you need to backup your iPhone contacts, media plus it gives you the ability to create your own Ringtones!