I have been doing some research on the web this past weekend trying to see what people think the biggest gadget of 2010 will be.Â  From CNET to The Street, it almost seems unanimous that the most anticipated gadget of 2010 should be another device produced by Apple. 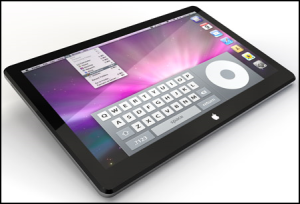 The Apple Tablet is questionably the most anticipated Gadget of 2010 and may be the first mobile device to include an OLED screen which have higher brightness and lower power utilization than traditional LCD screens.Â  This will come at the price being higher than a comparable one with LCD screen, but Steve Jobs is rumored to be insisting this particular design.

Will Apple be as successful in the tablet industry, which is really a very small niche and hasn’t truly broken out into main stream?Â  Or will this be the first big dud from Apple in a long while?

Personally I think the idea of a tablet PC to replace traditional notebooks is appealing, by having the keyboard integrated into the screen, with the ability to use a stylus or your finger to control directional movement, this can make for some great features and screen sizes. A tablet like this would be ideal for watching movies, reading news or an E-book, surfing the web and would be thinner than a traditional notebook.