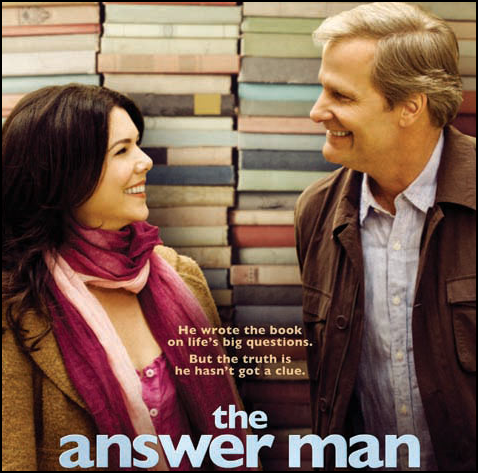 I saw the movie “The Answer Man” just the other night and was pleasantly surprised by how good a film it was. The film stars Jeff Daniels as a retired writer who wrote one book that supposedly channels the answers to all of life’s questions from God, though he has been in a reclusive hiding state ever since his book was published and has never done a public interview. We find Jeff Daniels character to be stricken with many OCD like disabilities and the similarity between his character and Jack Nicholson’s from As Good As It Gets is easy to spot.

Where the film really shines is how his character is affected by the lives of several other people running businesses around him and how he starts developing relationships and reaching revelations as a result of meeting and integrating with people outside of his sheltered apartment. The film was well acted, particularly by Daniels and keeps you engaged and curious about how his character will develop and how he really reached the answers from God in his first book.

Magnolia Pictures is the company that put out this movie and they have been putting out a great many independent films, most of which are never released in main box office theaters, but instead show up on your local video store shelves or online rental program. The Answer Man is a film for people who enjoy people drama’s, and if you liked As Good As It Gets, then you most likely will enjoy this film as well. Dragon Blogger gives this film 4 out of 5 stars.