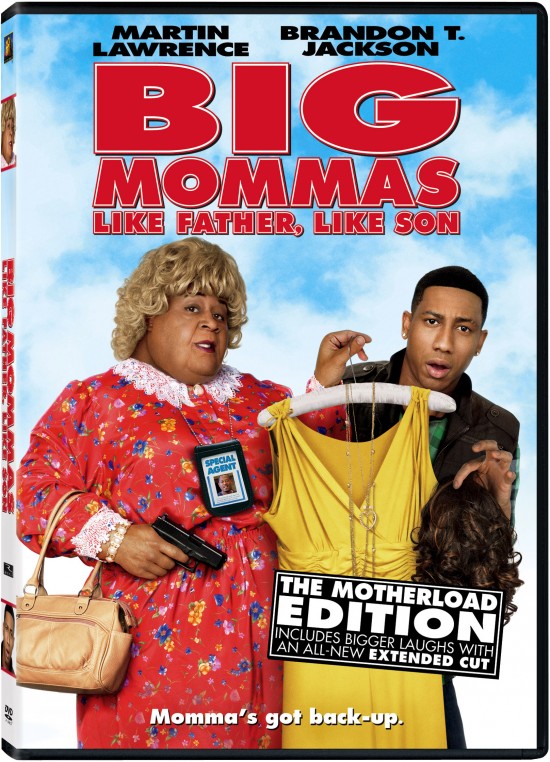 Big Momma’s -Like Father, Like Son (2011) is a comedy, directed by John Whitesell, written by Matthew Fogel and Dohn Rhymer. The film stars Martin Lawrence (Bad Boys I & II, Big Momma’s House I & II), Brandon T. Jackson (Percy Jackson & The Olympians – The Lightening Thief), Jessica Lucas (Cloverfield, Melrose Place TV series), Ken Jeong (The Hangover I & II), and Ana Ortiz (Ugly Betty TV series) and is about a “housemother” going deep undercover in an Atlanta ‘all girl’s’ School for the Arts–bringing his “niece” along with him to solve a crime.

Well, I will say this: I didn’t expect to enjoy watching Martin Lawrence prance around in a fake fat-suit again–but I did. Maybe it was because I was a little under the weather, or maybe it was because I could not find anything better to watch on the History Channel. Big Momma’s – Like Father, Like Son has well-to-do laughs, and is a tad-bit family friendly.

In the opening scene, FBI agent Malcolm Turner (Lawrence) is just finishing another case, when his mail carrier (Jeong) has been “misplacing” his mail. After a few funny verbal exchanges, Turner gives chase to his mail carrier, tackling him, and finally receiving his mail. This is the last you’ll see of the Hangover’s Jeong. He served as nothing more in this film than a product placement.

Malcolm’s son, Trent, wants to be a singer/performer/rapper, and his father’s plans are not in the same spectrum as his own–as he wants his son to go to college. However, after witnessing a brutal murder—his son Trent (Jackson) has to go undercover to escape. 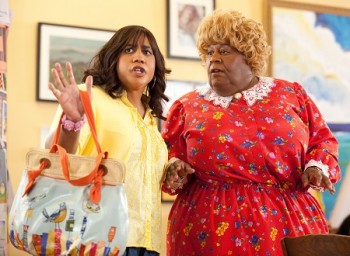 When word of what happens gets to his father, Turner has a plan that involves Trent also going undercover to help him solve this case. So let us break out the femsuits, shall we? Now all Big Momma and her “niece” Charmaine has to do is infiltrate the Atlanta ‘all-girl’ performing academy and obtain a flash drive that had pertinent information to arrest the criminals.

Now the less serious scenes in the film are where the tone of it turns–from Malcom (Momma) playing Twister with the school’s security guard, to posing for an art class, allowing the students to paint the “nude” Big Momma. It was a funny “ha-ha” moment when the sheet that was covering Big Momma fell and “she” replied “whoops, there it is!”

I felt the school security guard (Faizon Love) hitting on Big Momma was a little off, seeing as how he didn’t know that “she” was really a “he,” but it was hilarious. It was also somewhat awkward to see “Charmaine” hit on one of the girls, Haley (Lucas) at the school, as it showed his own personality, and not that of his persona. Although the movie positively promote holding onto your dreams, and being who you are, it also perpetuated the negative gender stereotypes of the girls in the school–obsessed about boys, losing weight, and shopping. Malcolm gives the girls an opposite message (as Big Momma, of course): be who you are, take care of your bodies as they are, and if a guy treats you badly, then it’s time to dump him. 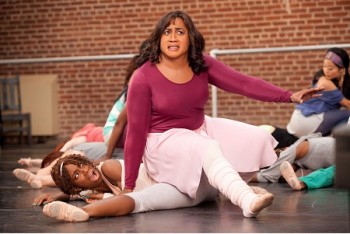 Overall, there are a few laughs in between all the running around and trying to escape evil madmen. Lawrence’s role as Big Momma is, as always, perfect, even if he had to tag Jackson along as his “niece.” Honestly, I don’t know if another Big Momma film would be such a great idea to make… I think we all may have had enough of men dressed as women in fat suits (hint: Mrs. Doubtfire). Martin Lawrence is indeed a talented actor and comedian–although, I do feel the need to go out and rent a billboard ad that reads “Martin Lawrence–please, hang up the Big Momma suit!” Because really, Mr. Lawrence must need the money to do this ‘Big Momma’ movie thing…again.