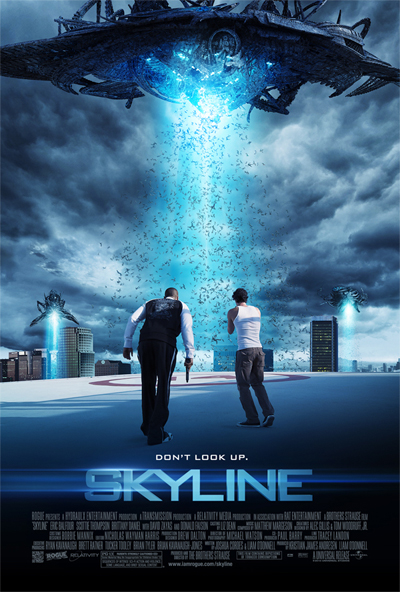 There are times when you are watching films that you will have to weigh the good and the bad. This film had an acceptable balance of both–almost. Now I do not want you all to get excited, thinking that I may have actually began to “enjoy” watching a mainstream, Hollywood films, but there are those strange occasions when I’m vulnerable and will give in to all the CGI and special effects of a film—and not pay too much attention to essential film’s substance (brilliant story, great acting, cinematography, and good direction)—foundations, that make a film great. Not saying that this film had all of the criteria aforementioned. Unfortunately, consider this one of those times that the cover of the DVD box caught hold of me.

The film is set in Los Angeles, where everything and everyone is perfect—beautiful, wealthy, fantastic weather, and immaculate high-rises, where the rich surveyed their lowly inhabitants from high towers as if they were the lords of the universe. Yes, the film started out clichéd. In the first scene, the aliens have already begun harvesting people using a huge vacuum (which was really cool), sucking them into these huge mother ships—people who were lured by a brilliant blue light. Before the chaos, however, we will go back a ways, and find out a bit about our potential abductees. Don’t worry, I will make this as painless as possible.

Jarrod (Balfour) arrives to beautiful Los Angeles with his girlfriend, Elaine (Thompson). Jarrod is there to meet up with his best friend and successful businessman/rapper (not sure which) Terry (Faison). Terry wanted to offer Jarrod a job because he had some undisclosed talent that the plot failed to oblige us with. There was a huge party to celebrate Terry’s birthday and all seemed to be going okay–until all hell broke loose.

After a long night of drinking and partying, the alien attack begins in the early hours of the morning. Our group, awakened by the attractive blue light that instantly claims one victim, Terry’s assistant Ray (Neal Hopkins), and nearly got a hold of Jarrod, who spent some time in the “light,” which caused some sort of growth to form on the skin and eyes, was immediately wrestled out of harms way by his best friend, Terry. Dazed and confused, this gang of helpless party-goers decide to make a run for it, and head out to the lake…which they believed the aliens would not venture to because all aliens are afraid of water.

Okay, now, it is obvious that the directors or creators of the film may have seen the movie Signs, directed by Mel Gibson in 2002, may be the reason why these individuals believe that aliens are afraid of water. Hence, the escape plan was to head out to Terry’s huge “yacht” to survive the impending alien invasion, which didn’t work. So, in their struggle to remain calm, they decide to hold up in the apartment, and wait for help. Cue in the military and the spectacular aeronautics where black hawk helicopters and stealth bombers come in and torpedo’s one of the massive mother ships out of the sky—which only served to piss the aliens off further—the mother ship regenerates and now these huge multi-eyed gorilla-type aliens come out and begin rounding up the rest of the human population. Oh, and I 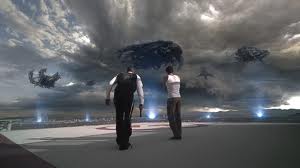 failed to mention that the reason the aliens were harvesting humans–brains. After watching this film, if harvesting brains extended out to the viewing audiences, I believe the aliens have succeeded there as well.

Skyline is just one of those films that will grab a hold of you and forces you to watch as a group of helpless individuals who bicker back and forth at each another, trying to survive an alien invasion. What’s worse, the film hugely hints that there will be a sequel…and depending on how the money measured up with this film, I highly suspect we are in for another round of “razzle dazzle” special effects—and more pretty people being lead to the slaughter. On a more positive note, the special effects were boss–and that was about all.

This was one time I was actually rooting for the bad guy. Go team extraterrestrial.