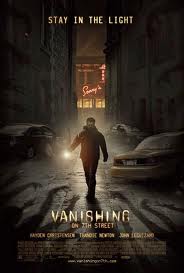 Vanishing on 7th Street (2010) is a horror/thriller film, directed by Brad Anderson (The Machinist), written by Anthony Jaswinsky, and stars Hayden Christensen (Star Wars Ep. II & III, Jumper), Thandie Newton (RocknRolla, Mission Impossible II), John Leguizamo (Ice Age I & II, The Lincoln Lawyer), Taylor Groothuis (Flipped, What If…), and, new-comer, Jacob Latimore. The film involves a small group of people, banding together as daylight disappears, realizing that the Dark is coming for them.

The film begins in a movie theater, packed with people enjoying a film, while the projectionist, Paul (Leguizamo), pours over the labyrinth of film reels near his desk—along with a book about the mystery of an ill-fated settlement—an entire colony of English people—vanishing from the colony of Lonoke in 1597.

The same mystery reveals itself, again, in a local hospital. A physical therapist, Rosemary (Newton), going out for a cigarette break, suddenly see the lights of the hospital go out, and hears fading screams, in the dark, from within the hospital. A TV news reporter, Luke (Christensen), wakes up, and finds that his loved one did not make it home last night. On his way to work, he fails to notice that he is stepping over remnants—clothing—of people, simply littered along the pavement. It isn’t until he realizes that his once busy street is silent and in the streets, there are cars with no drivers, crashed into one another—along with the airplane in the distance, plummeting from the sky—erupting, on impact, in a fiery storm.

A twelve and-a-half year old boy, James (Latimore), is awaiting his mother’s return from a church, searching for survivors, and escaping shadows, and occupies the bar as Luke approaches the town’s only haven. Also among them, always hidden, in the darkness an unnamed evil, were lurking shadows, out to claim the remaining survivors, lured to the only lit-up bar in town, on 7th street. The film does serve up tense, suspenseful moments, where shadows of the unknown—shades I would have to call them–stand and moan in attempts to lure the remaining survivors into the faint light. 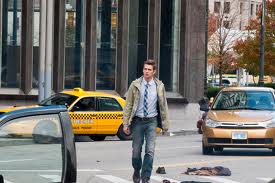 The living, vanished, and, coincidently, the same happens to all the people of Detroit in this apocalyptic thriller by director Brad Anderson. Although “Vanishing” had a M. Night Shyamalan appeal—moody, atmospheric, and tense—the film included many variations of other films of this genre type – where a few stragglers remain after a catastrophe, always seeming to meet up in a designated location—a bar, in this instance—where the only light source is powered by an old, backup generator. “Vanishing” was filmed in 20-days in Detroit and this may be the reason for the film feeling a bit “unfinished” at the end. 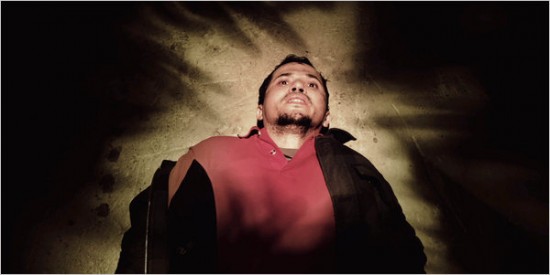 But I just cannot get over how the film ended. Was the intention to allow for introspection of our own lives and the way we live them? Or did the film ended up being a zombie flick…sans the zombies? Ultimately, the film successfully targets our fears of what could happen when the light goes out.

“Vanishing,” overall, is a great film. Terrifyingly mysterious, thought provoking, questioning faith in the aftermath of, what seemed to be, a Rapture of sorts. I enjoyed that the film also gave some reflective insight of humanity, and how we will always attempt to resolve or maintain a deeply held belief in a God? Perhaps, in order to give us hope that when all is said and done, when the peak of our fear begins to paralyze us and force us to realize that there are truly no answers, and the only, logical, explanation amidst the chaos and destruction–provides only doubt.

Special Features included alternate endings, which were all similar—with an exception to one, rendering itself in complete darkness. Pretty creepy. Revealing the Vanishing on 7th Street is commentary with all the actors in the film discussing that the truth of nyctophobia—the fear of darkness—something we all, in a way, fear. The director, executive producer, and assistant also discuss their roles in creating the film, discussing how the script and film came about. The actors also discussed their portrayals of the characters in the film in the Behind the Scenes Montage, Interviews, and director Brad Anderson Commentary.