I recently received the MSI GT72VR Dominator Laptop and this beast is an amazing mid range gaming laptop but I was so frustrated upon arrival when I had some very odd crashes, BSOD and other issues around the Killer Network 1435ac dropping the Wi-Fi network and then not being able to see the network at all.  Sometimes the Windows 10 wouldn’t even see the Wi-Fi adapter it would simply be missing.  So I scoured the Internet looking for solutions and you will find that MSI doesn’t even host the right drivers for the Killer Networks 1435 Wireless Networking Adapter, they have drivers for the 2xxx series.  So you have to go to Killer Networks directly to get the right drivers, but not just any drivers, it took finding 4 different driver versions and the newest drivers were not the stable ones for me.

On top of that there is another setting for your MSI GT72VR Dominator  Wi-Fi adapter around power and sleep management you need to change which stopped the errors below.

Here is what I did to finally fix the Killer Newtork 1435 Wireless Network adapter dropping connections issue, hopefully it will work for you but I am also linking to several different driver versions so you can test them all out to see if one is more stable than another for you. 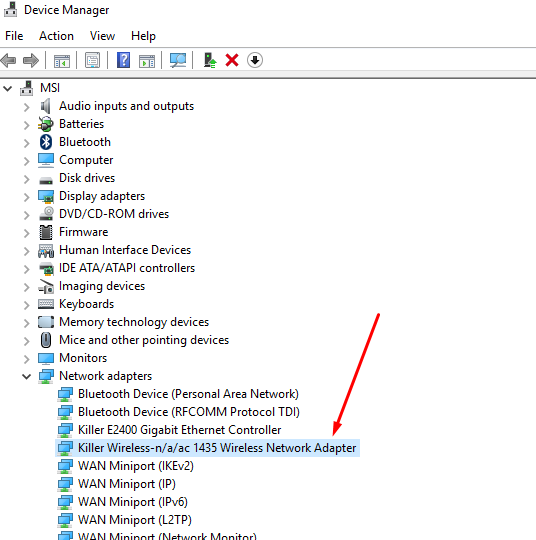 First try this trick and see if it works, then try replacing the driver and repeating this step. 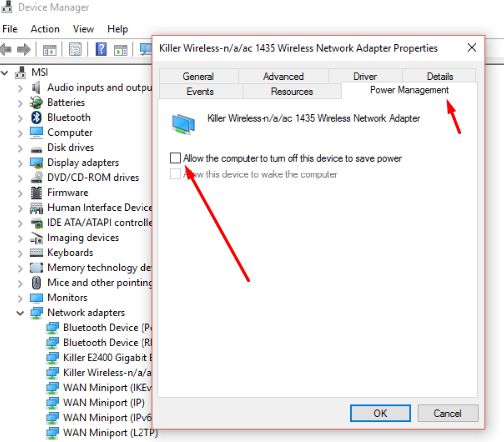 Drill down in your device manager to your Killer Wireless-n/a/ac Network Adapter and right click and select properties. Note I have read that this issue resolves other wireless adapter issues to so you may want to try it no matter what.  Click on the Power Management tab of your wireless network adapter and uncheck “allow the computer to turn off this device to save power” this caused many issues with my MSI Laptop running Windows 10.

Because the Wireless Network Adapter couldn’t go properly into sleep mode it would cause a variety of Windows problems with apps that try to connect to the Internet and eventually ended with a Windows 10 Stop Code of DRIVER_STATE_POWER_FAILURE on my MSI GT72VR Dominator and this was the Killer Network Wireless Network card not playing well when the laptop tries to turn it off during various power conservation states.

Now, this above step alone didn’t solve the issue of my 5G and 2.4Ghz Wi-Fi dropping constantly, I couldn’t even download a single Steam game without losing network connectivity.  So I started doing various driver updates, the MSI 72VR Dominator came with version 12.0.0.210 and I did update it to the latest I could find which was version 12.0.0.278 but it turns out rolling it back to 12.0.0.230 was the most stable version for me and I had zero issues with it.  So I am going to link to all driver versions of the Killer Networks 1435ac wireless network card that I have used and you can play around with them to see which one works best.

Now, normally Windows won’t let you downgrade a driver, so I would start with the oldest and work your way up, but in my case I had to downgrade the driver which involved manually finding the file and overriding the driver version.  If you have the various driver versions downloaded, you can select the rollback driver feature and browse to your previous version. 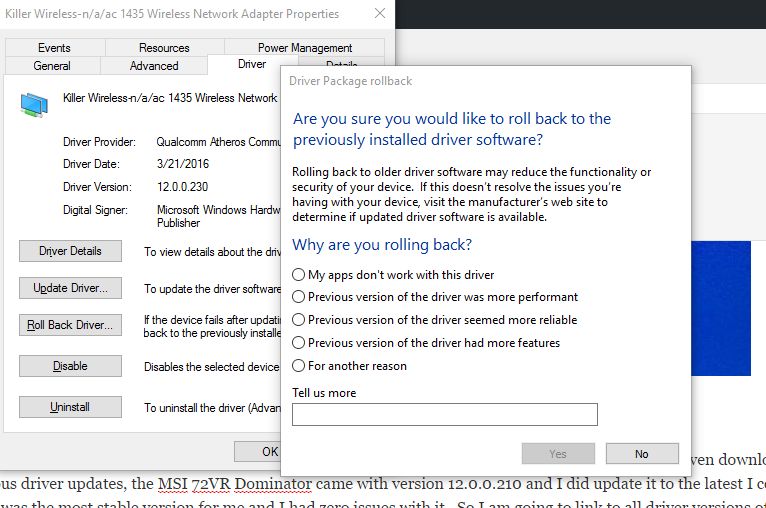 As I mentioned here were all 4 driver versions that I tried and will list the ones I downloaded from Killer Networks website so that you can upgrade your Killer Networks 1435ac wireless network card drive.  Remember when you change the driver by default it will reset your power management feature again so you have to remember to repeat Step 1 after you switch the driver.  A reboot is highly recommend each time you switch the driver. 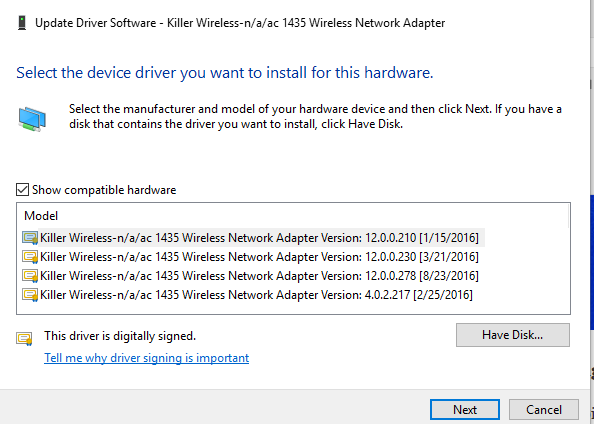 Finally I would also recommend you click start, run and type “cmd” right click and run as administrator.

then reboot, hopefully a combination of these tips will have solved your MSI VR72 Dominator Wi-Fi issues so that you can be back online and gaming with a stable wireless connection again.

You can also fish around on Killer Networks Driver Download page also if my links don’t work or you want to get them from Killer Network directly here.

So I had a rough first few hours with the MSI GT72VR Dominator but I like to troubleshoot and solve problems myself before I ever call support, so I never contacted MSI Support, it is possible that had I contacted their support they would have given me the updated drivers right away.  If none of my steps solve your MSI GT72VR Dominator dropping Wi-Fi issues then I would definitely say reach out to MSI Support at this point and good luck.