If you’re like me, you use Windows 10 on a regular basis. And if you’re also like me, you enjoy listening to music in the highest quality you can, with the right amount of big pumping beats that make you wanna rock your body ‘round and ‘round. To be fair, I haven’t experimented with many audio enhancers, but most of the ones I’ve played around with have distorted and stopped most of the sound quality in favor of bass or treble notes. Nahimic? Nah bruh, this program doesn’t do that, from what I can tell. Even if it does, you can correct it easily in the program with a built-in equalizer.

Though to the annoyance of most Windows 10 users, this program’s little “install me!” companion comes mischievously placed on your little pop-up hidden icons tray to commit hate crimes against your computer’s resources. Okay, not that severe, don’t worry FBI. But the problem is, this program isn’t even uninstallable. It’s just seemingly useless bloatware on your PC. 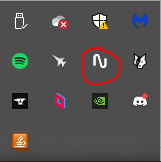 SUBTEXT: Yes, I have a lot of icons. No, you can’t have them.

However! This is not the case… though you have to go through horrible lengths to actually fully install and render functional this piece of… ehm… surprisingly good software? Yeah, I think that’s the way to put it. To be fair, the Windows team should have made it a lot easier to install or remove in the first place if they wanted people to actually use it. Heck, if you want the little reminder program to stop clogging up your resources, you literally have to go through a complicated process of locating and disabling certain services on your PC. Which, admittedly, is more than most people can handle, especially for the common person over 30-40 years old and a slightly receding hairline. Yes Arnold, I still think you look good, you rock that ballcap.

Now. Moving on. Getting the pile of j-I mean, ironically wonderful piece of technological software to work properly. Now if you’re like me, you got your PC before Nahimic Companion was even installed in the next Windows update. Oh, haha, silly Windows. Oh how you trouble me so. Silly you, you forgot that most of us aren’t running the latest motherboard audio drivers, didn’t you?

Too bad. I installed the program after clicking on the little icon and the thing literally didn’t even do anything besides adjust my volume. I was laughing and going “what the (redacted)” while also being legitimately curious what in the world was going on. Apparently Nahimic is actually an audio source in itself. Like a mini sound card for your PC that doesn’t require a sound card, but is a lot more complex than it seems.

Most of us are running Realtek HD Audio, or Intel HD Audio, or one of those things. Well folks… there’s also Nahimic Audio. I was puzzled as to why it wasn’t working, and apparently the drivers for my motherboard literally wouldn’t support it, because it’s an audio driver in itself (I think)? Thus, I had to go through the long and arduous journey of going to the MSI website, looking up my motherboard with the command prompt (just type in “cmd” in the windows search bar, and you’ll see what I mean), searching through numerous amounts of motherboards on two separate drop-down menus until I found the right one, and then finally downloading the proper drivers.

However. I wasn’t done. I had to run the setup and installation program for the updated Realtek driver, which then restarted my PC two times. Then I had to extract the whole driver folder (because the Nahimic setup wouldn’t run with it in compressed format), and at this point I wanted to just start laughing insanely as it restarted my PC for a total of four times (if I remember correctly) after the whole process was done. But I had self control and started sweet-talking this wonderful beast of a machine, because we all know we like our sweet gaming rigs a bit too much for our own good, and they deserve love too, am I right!

So after the journey of installing all those suckers and going through the nightmare torment of looking on various tech support forums, I launched Nahimic and put on my favorite song for testing audio (be it headphones, equalizers, and what have you):

Personally, I love the song, Panda Eyes is wonderful.

And… surprisingly, it worked. And heck, it worked better than I ever would have imagined. The pain was… worth it? Like, jeez man – I haven’t ever had some piece of software (or firmware?) be so worth the struggle like this had been in a very long time. The sound quality was crisp, especially after some tuning, and I don’t mean your average, “this is good quality,” music. I meant, the drivers literally turned my world upside down when listening – better than Realtek, better than Intel. And I mean that. This is the closest thing you’re gonna get to a sound card (from my limited experience), without buying a sound card.

In fact, the program seems to be doing the Open Source approach, without being Open Source, but on a professional level of quality. It has four tabs besides the settings: Audio, Microphone, Sound Tracker, and Sound Sharing. Audio is pretty self-explanatory, and so is Microphone. However, it has four unique sound preferences for the Audio section: Music, Movie, Communication, and Gaming. However, there are multiple effects and sliders you can manipulate either up or down, along with an in-built equalizer to go on top of these in case you want to fine-tune further, which is what makes this program special.

In most cases, the sliders would manipulate the equalizer settings automatically. With this, it’s literally different filters and effects that surprisingly don’t decrease the sound quality (except for maybe the Voices slider, but it’s not supposed to care about sound quality to my knowledge, it’s just to help you hear voices better – which it does astonishingly well). Other than the Voices slider, there is also a Bass and Treble slider, which take some time to figure out but once you fine-tune both of them to balance each other out, it’s wonderful. There is also a Surround Sound feature, which would be good for movies or concert halls (not so much for general music listening, as it makes things sound a bit odd in my opinion).

Then there’s also a Volume Stabilizer that helps music not hurt your ears from the sound tweaks (unless you’re like me and don’t care about the uneven volume). I personally like different tones and frequencies in music expressed more than others, so this feature is something I don’t use, but it still sounds great. And if you don’t want to bother people with your own music as much, and have it be more of a white-noise-esque sound to people that won’t disturb them with uneven audio, there’s a Night Mode setting in the Volume Stabilizer. It doesn’t decrease sound quality (to me), but it may make things a little harder to hear if you have picky hearing for certain frequencies.

The Microphone section has a bunch of filters such as Static Noise Suppression, Echo Cancellation, and a Voice Stabilizer. It also has Lateral Sound Cancellation for those built-in and analog microphones that only records audio coming from the front speaker. Not sure how this works, to be honest. You’d have to look it up a bit more yourself. I personally don’t use these as of right now. A noise gate is sufficient for background noise unless you’re in a professional meeting – which is actually a good thing, because Nahimic caters to professionals in the workforce as well.

Two other features that Nahimic offers are the other two sections on the left. The first is the Sound Tracker. This is useful for gamers that play FPS games and/or games where sound is a key element of survival. I personally haven’t tested it out, but from what I can tell, there is a list of compatible games, and it displays where exactly the sound is coming from. Try it out yourself sometime, you might be impressed. Then the final feature is Sound Sharing, where you’re able to listen to the same audio on two different devices, be it headphones, speakers or what have you. This would actually be very useful for DJ’s, I imagine, listening to two different audio sources at once while on a laptop.

Regardless, that about covers it for the review and whatnot of Nahimic.

Now a question for you: What’s your favorite audio driver, sound modifier, equalizer, etc? I’d like to hear your thoughts.

Thanks for your time. Roxie out.