MOBA has been dominating the world of video games for a long time. Everyone of us must have heard of one of these iconic titles: Aeon of Strite, Defense of the Ancients or League of Legends. Despite the difference in themes and mechanics, these games require players to have good reflexes, a constant and admirable harmony between the hand movements and the brain, and of course, transparent communication skills among team players. Due to these characteristics, the game accidentally filters out a great number of players, who lack at least one of these core skills.

Fortunately, a lot of board game designers and publishers have been working hard to bring the digital MOBA to life. This year, Winged Titan joins the force, to release their first ever project – The Millennium War. Even though the Millennium War might not be the first MOBA board game adaption, it is unique enough to be the first of its own. The game took place in another Universe, where the legendary Millennium Gate is the source of all the elements. It releases its cosmic energies in the form of power beats, sacred weapons, and the forbidden-ancient spells. As a result, the world is divided into two sides to conquer and harness this unlimited source of power: the Virtues and the Sinners. These two sides, together with their heroes, will have to battle against each other in the Millennium War. 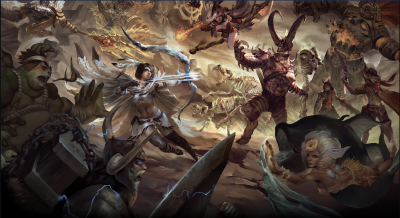 Out of the box, the game features two different play modes: competitive and cooperative. In the Competitive Mode, it will be a direct competition of 1 vs 1 or a 2 vs 2. There are three ways to win in this mode:

Each team will have 5 ancients on their side to defend. In addition, there will be a team of four different heroes on each side. These heroes are extremely unique. The development team designs each hero either based on folk tales, or the legends from different countries and cultures. In order to immerse with the feelings from the digital MOBA, The Millennium War offers a hero drafting mechanism. Each team will take turns to draft their heroes, instead of drawing them randomly or picking them all at once. Not only does this reduce the random factor, it also forces players to start preparing their strategies for the whole game. A wrong decision in this phase can throw their whole game away. This is a realistic reflection of the digital MOBA game. 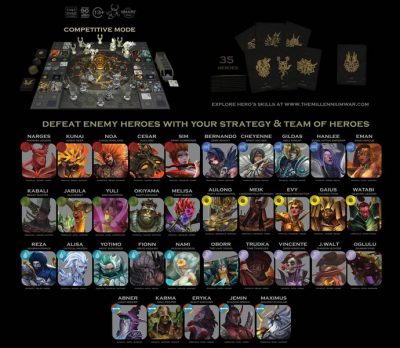 The pool of all the heroes

In contrast to the friendship-destroying competitive mode, players can also join forces to defeat the boss together. Different bosses will equip unique sets of power and abilities. Hence, besides strategizing and careful planning, players have to put lots of effort in communicating as well as discussing the next moves. This mode supports from 1 to 4 players. Regardless of the number of players, there will be only 4 heroes total in this mode. Besides heroes, there will be three towers on each side (Virtues and Sinners). These towers represent the additional lives for corresponding sides if the players need. In order to win against the board, players have to defeat them before the boss uses up all of his/ her AI cards. Also, players have to be cautious about their movement with their heroes as well. The game will also defeat players if the boss happens to slay all the heroes from both sides. The rule of thumb would be: keep attacking the boss while protecting your own heroes. 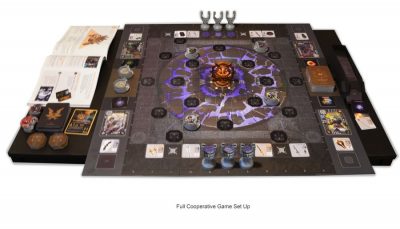 At this point, even when the kickstarter campaign has not launched yet, I am already amazed by so countless different things. The most impressive one is the extensive amount of effort and passion in developing the lores of each hero, along with the unique lores and their skill sets. What I like the most is how the game lets you access and strategize your game play, just by skimming through the heroes abilities. In other words, players can appoint the role of each hero in their line up based on their abilities. For instance, ABNER – the Wizard Light Seeker, in my opinion, is an aggressive support. With his visibility, he can easily escape and get out of the danger zone. Moreover, he can also transfer mana to allies, so that they can freely use their special powers. Players don’t necessarily have to plan him as support, but it is more beneficial for the team to have a hero that can benefit from Abner’s skills. This is a very streamlined flow, just like any digital MOBA game. 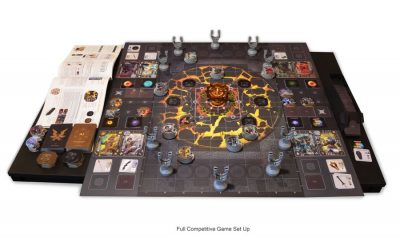 The full setup of  the competitive mode

Another incentive for the backers is having the Rhiko set for free, as long as the backers support the campaign within the first 48 hours. 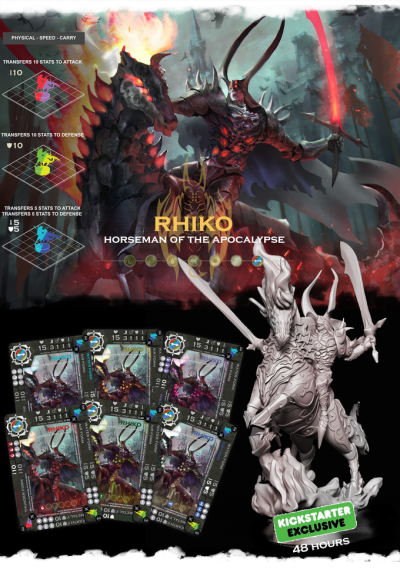 The Millennium showcase will continue next week when Winged Titan launches their campaign. As of now, the plan is June 29th at 8:00AM EST. Here is the link to the preview of the campaign.

Also, enjoy the stunning state-of-the-art miniatures from the unboxing video.