Most videogames and action titles particularly, keep you on your toes by making you vulnerable to attacks, but things work slightly different in Neverdead. Konami assumes that it can be just as fun to be immortal and cruise through demon infested levels, in an experience that comes closer to Serious Sam than lets say Bayonetta or Devil May Cry. Unlike Sam though, who dies frequently and starts all over again more viciously than ever, our hero Bryce keeps pushing the envelope. 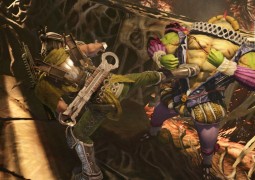 In [easyazon-link asin=”B003O6HDRU”]NeverDead[/easyazon-link] no matter what the bad guys throw out at him, he seems unaffected and not even losing a limb, or all of them can stop him in his tracks. This is one interesting premise to say the least and when you wind up rolling around the room as a head trying to reconnect the lost body parts, you can say for sure that you’ve never seen it before. In theory this should lead to free-flowing action, as the player can let his imagination roam freely and find new and original ways of annihilating monsters, instead of fearing for his life.

Sadly, the game mechanics are not responsive and intuitive enough to facilitate this kind of action and switching between melee and ranged combat hurts the game dynamics. Demons are agile and they don’t stand still waiting for you to deliver the final blow, which makes the entire experience borderline frustrating. It is not so easy to find the perfect mix between challenging and entertaining, but sadly Neverdead doesn’t come even close.

What is broken can be reforged

Story-wise, Konami’s latest release is rather shallow and neither Bryce or his mortal partner Arcadia are too convincing. The universe itself is rather bleak and the monsters populating it fail to add some weight to the narrative, being simple obstacles that the player needs to overcome over and over again. Keeping Arcadia safe is more difficult that it seems, so while you struggle to recover your dismembered limbs, pay attention to your companion because her demise brings an untimely end to your quest.

Trying so hard to be different has its perils and with Konami striving to prove that Neverdead is truly one of a kind, things get out of hand. The paths less traveled  are less traveled for a reason, and by altering those very mechanics that proved their worth in the past, Neverdead alienates the audience. Innovative healing mechanisms, special sword fighting styles and the absence of auto-lock on targets were supposed to make this title unique. While they did, it’s up for the player to decide if the change is for the better.

I can only rate it with 2 stars out of 5 and encourage you to watch the trailer before spending your hard earned dollars: