This is not an expansion of Dune : Imperium from Dire Wolf studio. This game is one of the latest games from Gale Force Nine for 2-4 players. It is also a remake of Dune 197x as well as a more concise version of Dune 2019.

In Dune, you’ll take control of one of four major factions — House Atreides, House Harkonnen, Fremen, and Imperium — all of which compete for control of the universe’s most precious resource: melange, the only mysterious SPICE thing found at a very high price on the planet Dune. 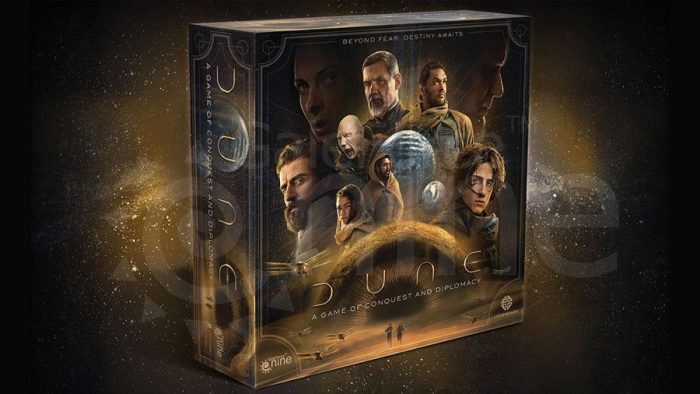 HOW TO PLAY DUNE

The game will last through 5 rounds and each round will have several stages. Starting in round 3, the player can win by capturing 3/6 strongholds in Dune.

Stage 1 – The storm rises. The sandstorm will go in a counter-clockwise direction. Wherever the storm goes, it wipes out troops and resources in its path.

Stage 2: SPICE Explosion – One new Spice card will show up. Players will place the resources into the areas indicated on the card. If it is the Sandworm card, all the forces and resources in the previous drawn cards will be wiped out.

Stage 3: buy a card. Each player will draw so that there are 4 Battle cards to their hand. Players can use them to fight in battle. There are two types: attack cards and defense cards. In addition, the player might have useless cards. This card, as the name implies, is useless for both attack and defense. Besides having Battle Cards, players can spend 2 spice to buy one Market card, up to three on the hand. These are the one time use cards.

Stage 4- Revival. During this phase, the player can bring back 2 soldiers for free. The player can pay 2 spice to revive 1 minion, or pay the number of spice corresponding to the hero’s value.

Stage 5 – Shipping and Movement. The player can spend 1 spice to send 1 force into an area. The player can put as many soldiers in an area as they would like. After that, the player can move a group of any unit to a territory up to 3 spaces away.

Stage 6 – Battle. If an area has 2 houses, the houses will start fighting. Each house will be given a wheel as a part of Battle Plans. The player can rotate up to the number of minions in the combat area. In addition, the player must also use one of his generals if available. In addition, the player is also allowed to use 1 attack and defense card if desired.

After making a plan, the player flips his plan. Whoever has more points wins the battle. The winner will get spice from the value of heroes who lost their lives in battle. The loser loses all his troops. All minions used in the winner’s battle also lose their lives.

However, after flipping the target, if one of the 2 has a Betrayal card that the other character uses, that person wins the battle. In this case, the winner will not lose anything.

Players will harvest resources based on the area where they have soldiers. For every 1 minion will give the player two Spice.

Starting from round 3, whoever controls 3/6 bases will be the winner.

At the end of round 5, each base gives players 5 points. Each Spice is 1 point. Whoever has the most points is the winner! 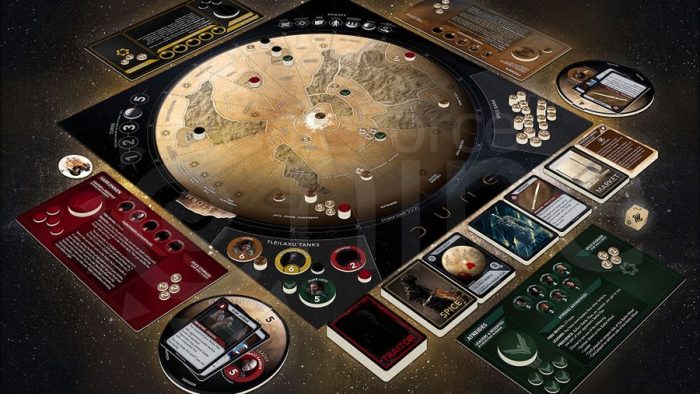 – A game that streamlines a lot compared to Dune 2019. The rules are more accessible, the playing time is shorter and the number of players needed to enjoy the game feeling is also less (4 vs 6)

– All the houses’ powers are strong, or rather too OP. An economic concentration house. A home focused on betrayal. One house focuses on carrying troops around. The last house has more champions than the other houses. This avoids imbalance in the game. Instead, if players focus on harnessing their power, the chances of winning for each house are equal.

– The title has Diplomacy – diplomacy, yet 1/2 of the game has no diplomacy at all. Starting in round 3, when the win condition is likely to activate, players will begin to find a way to contract to prevent other players from winning.

– Extremely high randomness. From owning a Betrayal card to 1 of the countless existing characters. Until the way the Sand Worm can appear at any time and wipe out the player’s minions. Even the market cards are the same. Luck is almost always the deciding factor, not diplomacy.

– High degree of punishment. Once you get rid of all the forces and run out of spices, it will be very difficult for you to return to the race to control Dune. That’s why, the most uncomfortable feeling is when the player does all she can, but still can’t change the situation. No troops and no spices, it’s too difficult for players to win a battle. Also, if you foolishly jump in, the player will become a delicious prey for other players. This can be considered as one of the biggest weaknesses of the game, the limitation in the catch-up mechanism.

You can buy Dune: A game of conquest and diplomacy at this link