Overwatch, the incredibly popular online first-person shooter game, has seen huge success since it’s first launch. When the open beta first launched in May 2016, it brought in almost 10 million players. With that giant success, Blizzard Entertainment wanted to grow the game to a whole new level. Due to the massive success, Activision Blizzard created The Overwatch League. The Overwatch League is an esports organization with teams all over the world. Imagine something like the NFL, with a big overall organization and small teams based on certain locations. You can even bet on esports and your favorite teams. Now, players and fans will be able to show their support for their favorite teams with special skins. Before the skins update, it wasn’t always easy to keep track of which players you were rooting for or to know who was on the same team.

Now, the skins options has made that simple. It’s exactly like wearing a sports team jersey. “Just like with traditional sports jerseys, purchasing Overwatch League skins will provide monetary support for teams in the league, and they’re also a great way to show off your team pride in the game,” Nate Nanzer said in the announcement video. As of now, there are only 12 teams and skins that will be available for purchase in 2018. All 12 skins will be available for all 26 in-game characters to wear and are different than the currently available skins. Starting January 10, 2018, the 12 teams will be: 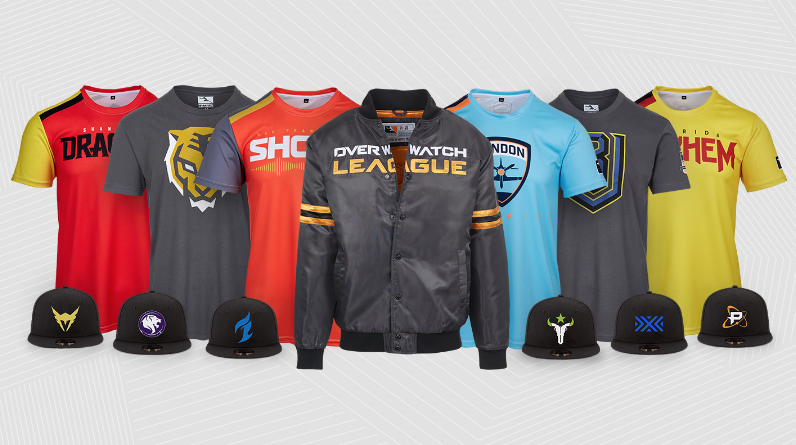 An example of some of the merchandise coming from Overwatch League. Along with the skins, a new currency is also coming to Overwatch. This new currency will be called “League Tokens” and will only go to Overwatch League purchases. Most players know of the purchases associated with loot boxes, but these will be a separate option entirely. These two options were created so the money can go to both the developer and also to the league’s teams. This gives the league a chance to grow and expand with a new revenue stream. The new Overwatch League is a huge step forward when it comes to blending traditional sports and esports. Bloomberg attempted to figure out how big the esports market is, and they guessed anywhere between $493 million and double that number. Since it’s a brand new market, people are still trying to figure out all the statistics for it. As with major sports teams, sponsorships and advertisers always want to get involved, and esports is no exception. Players and fans will begin to see everything rapidly evolve as time goes on. Neilsen has created an advisory board with executives from Amazon’s Inc.’s Twitch, Facebook, Twitter, Activision Blizzard Inc, and ESL to start to measure the impact of esports. Like traditional sports, each player on each Overwatch League team has a salary, health insurance, and retirement plans. One of the more fascinating aspects of esports growing is that unlike usual sports team, the Overwatch League has teams in cities across the world. Right now, the teams are in London, Shanghai, the United States, and Seoul. In a Reddit AMA, Overwatch League commissioner Nate Nanzer said that Brazil and Europe are the next two places they would like to expand next.