Today for review, we have something unique. Smartwatches aren’t really unique to our website or the world, we even did some reviews on smartwatches in the past, but how does a round smartwatch sound like? Maybe not everyone likes a square screen for their smartwatch and that’s why No. 1 phones came out with a round smartwatch. But what is it like having a round screen smartwatch, lets find out in my review of the No. 1 Sun S2 smartwatch. Oh and No.1 is the name of the company if you’re wondering ;) 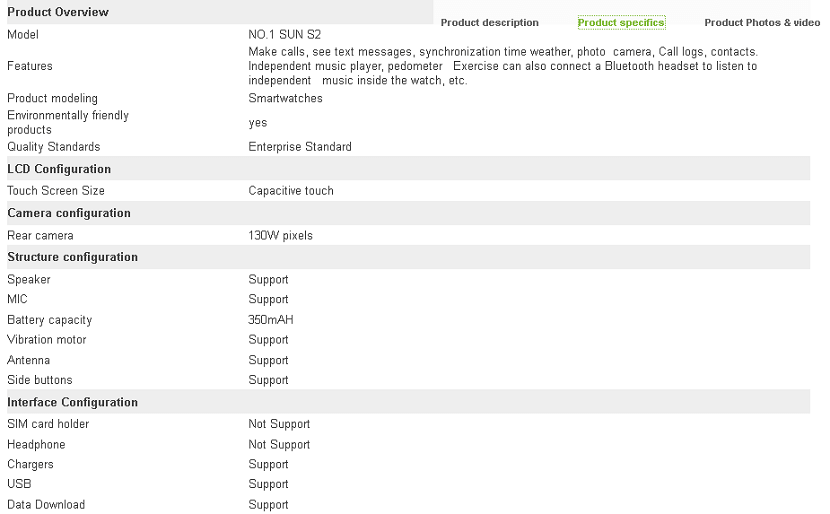 As you can see it’s a feature rich smartwatch and is also available in different colors and strap styles. The Sun S2 is available in Silver, Black and Golden color chains and also comes in Brown and Black leather strap. In my case, I got the watch with the silver chain though there was an extra brown leather strap present in the box as well. I’m not sure if it was provide to me personally so I can take the pictures for showcase or all the buyers are offered an extra strap with their purchases. I’ll make sure what’s the deal with this with the humble folks at No. 1. 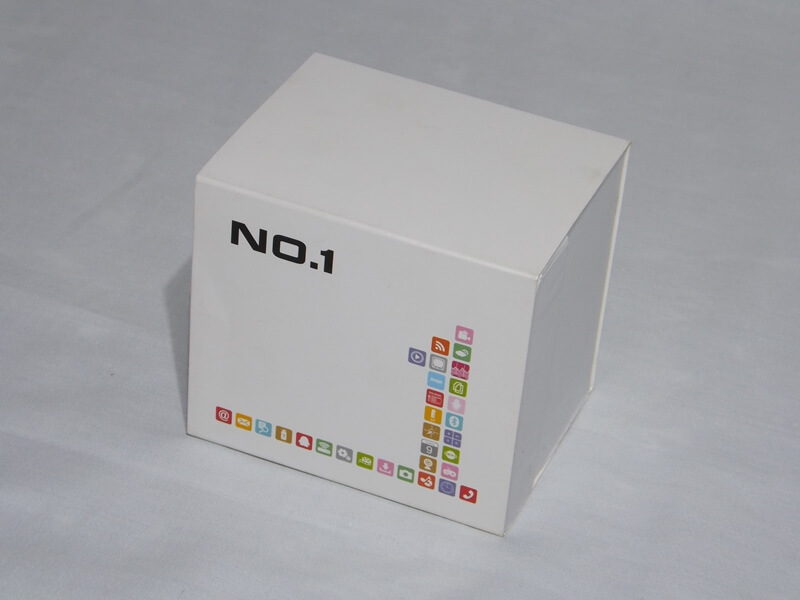 So starting the with unboxing of the watch, we get the watch in a white cubic cardboard box. There’s only No. 1 written on the front of the box with 1 being crafted with varies application logos. 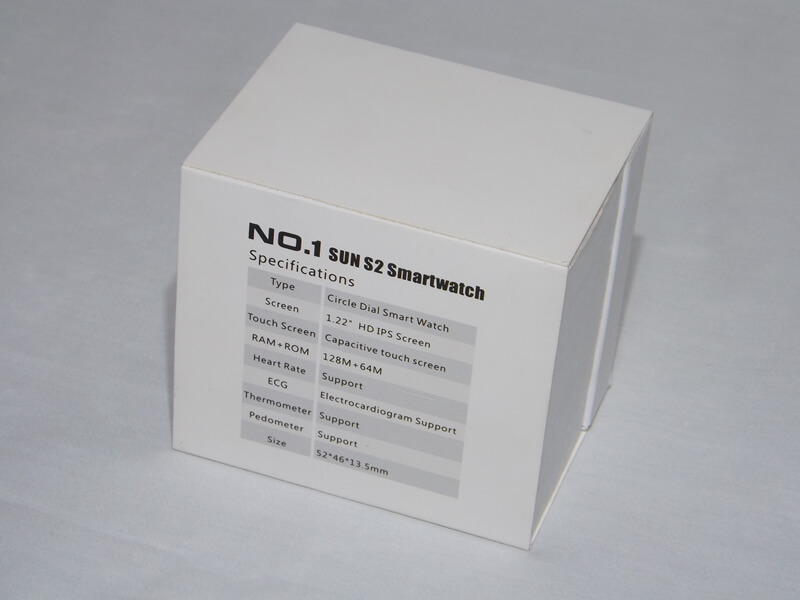 On the back we have some features mentioned about the watch like it has a 1.22″ HD IPS capacitive display screen, 128mb RAM and 64mb ROM and stuff. 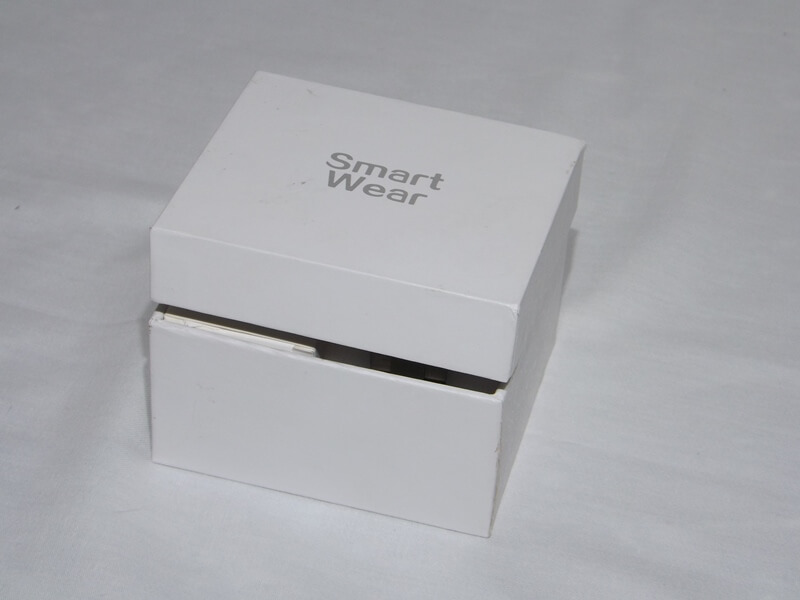 Once you remove the cover, the original container of the watch unveils with Smart Wear written on top. 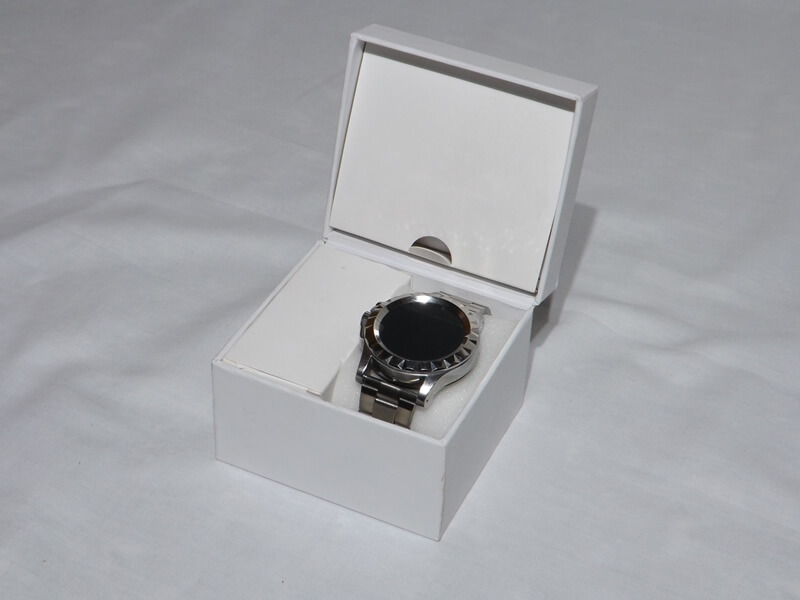 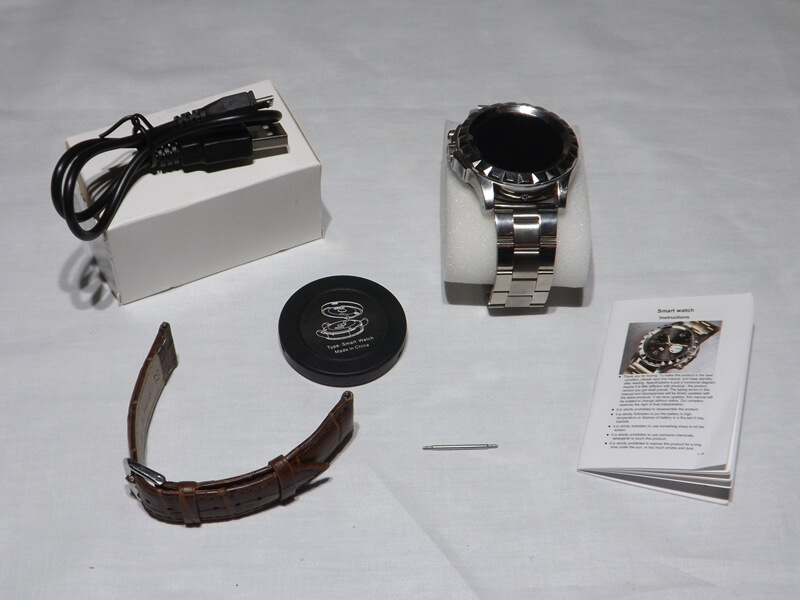 So that’s what you get along the watch. 1x charging cable, 1x charging cradle that fits at the back of the watch, an instruction manual and a strap clip. Ohh and where did that leather strap came from within the tiny box you ask? It was placed underneath the foam. You don’t get any tool for removing the straps though. 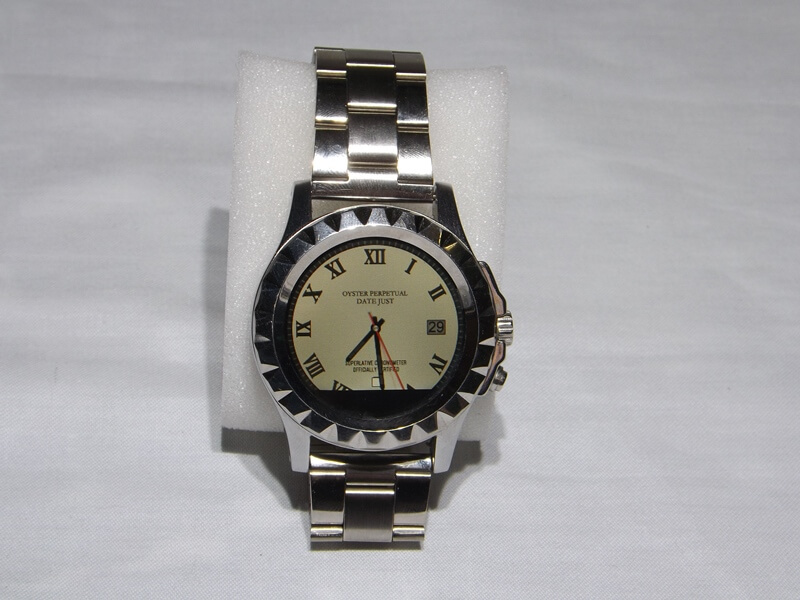 That’s how the watch actually looks like out of the box with the silver chain attached to it. It has a stainless steel body while the watch is also water proof. Once you boot up the watch and press the navigation button on the side, this is what you’ll be looking at. I know there’s something odd in the picture, specifically at the bottom of the screen. More on that later. 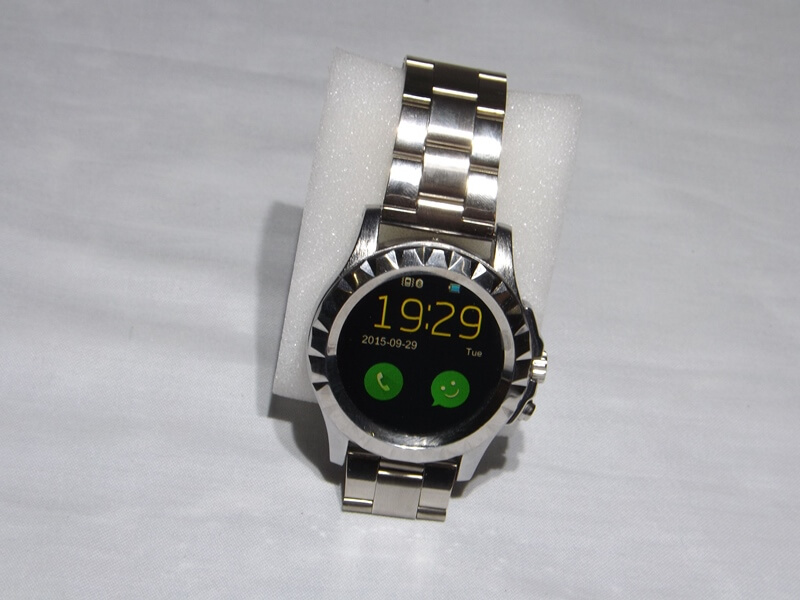 One more click on the button and you’re at the home screen of your watch. Here you have the shortcuts to applications that can be changed from the shortcut settings. We also have a clock on the screen while at the top we have the battery indicator, Bluetooth notifier and profile indicator. 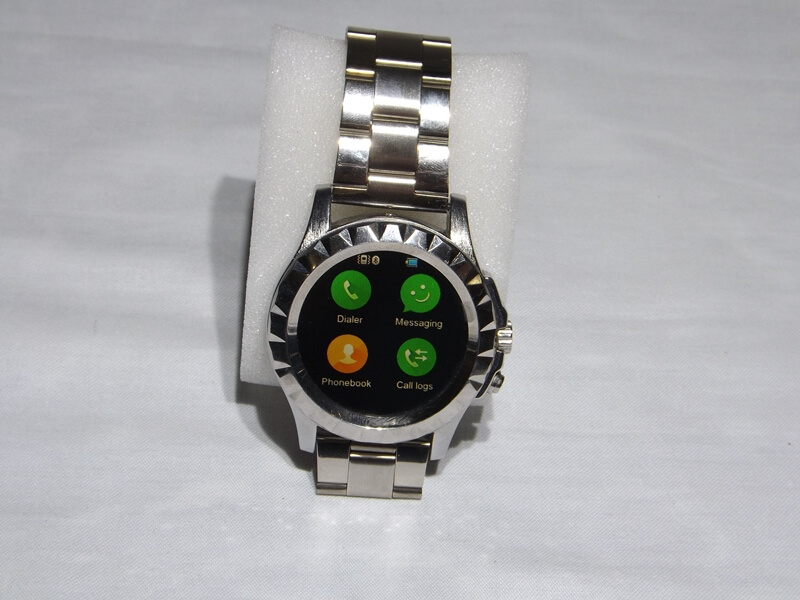 A swipe of the finger from either left or bottom and you’re in the menu of the smartwatch. From there you can navigate through the different applications the smartwatch has to offer. Make sure to check out the video present below for a look at the features of the Sun S2 smartwatch. 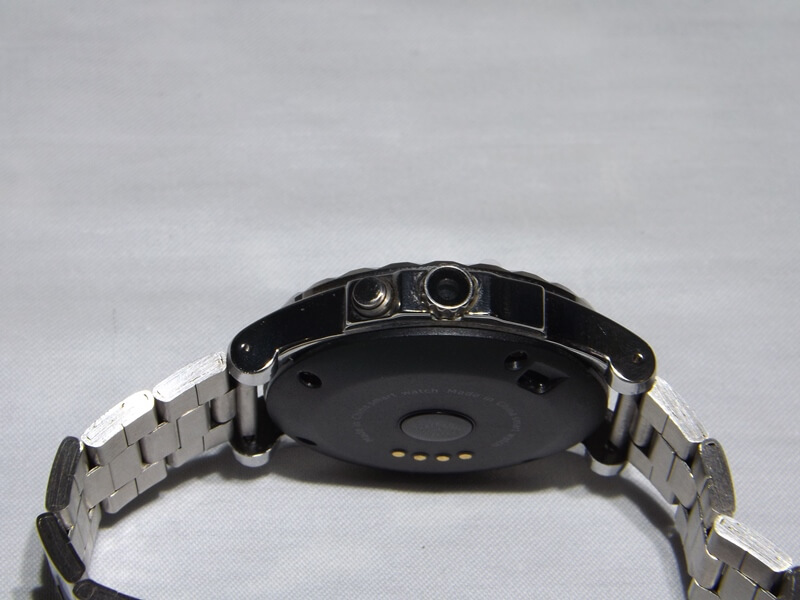 On the right side of the Sun S2 we have the camera lens and the home button. 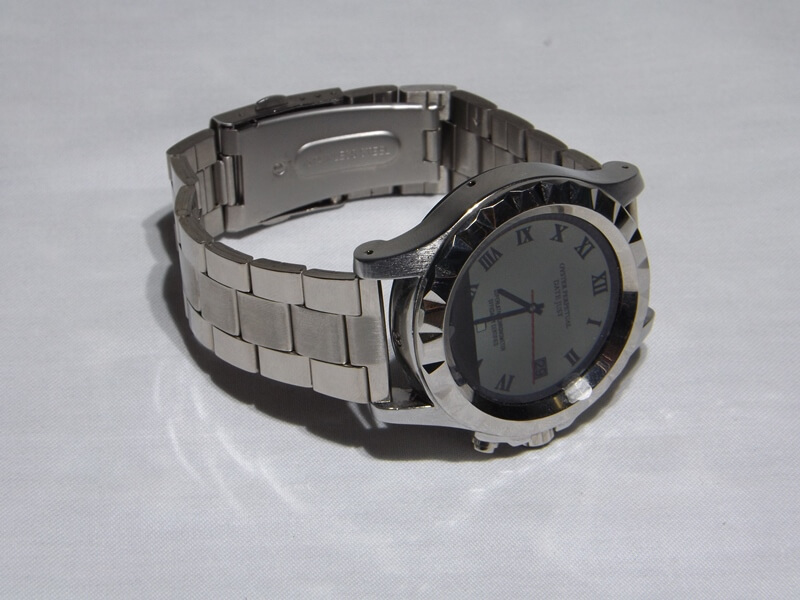 Here we have the microphone hole on the watch for calls and sound recording. I almost forgot to mention that the silver chain was pretty long that it was a loose fit even for my dad with healthy hands where as I’m more of a skinny guy so you can imagine :3 Conclusion, you’ll surely be removing one or two cells from the chain. 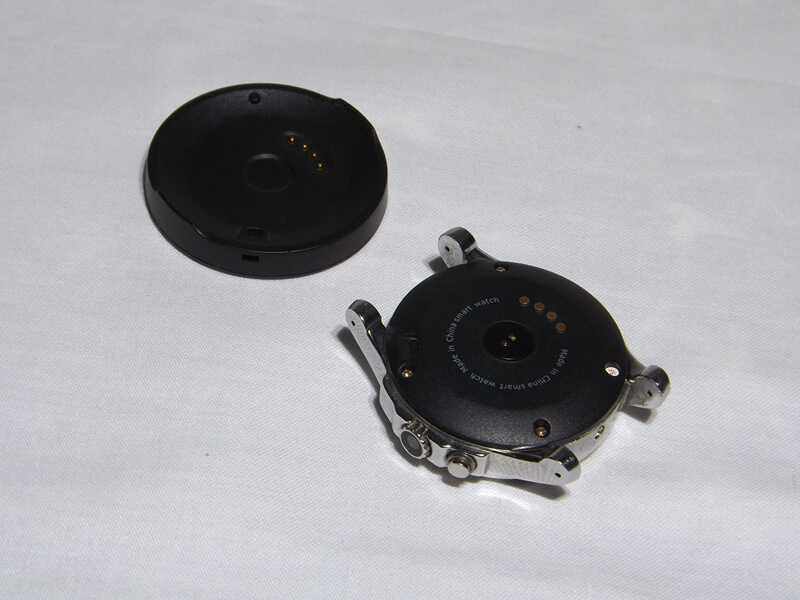 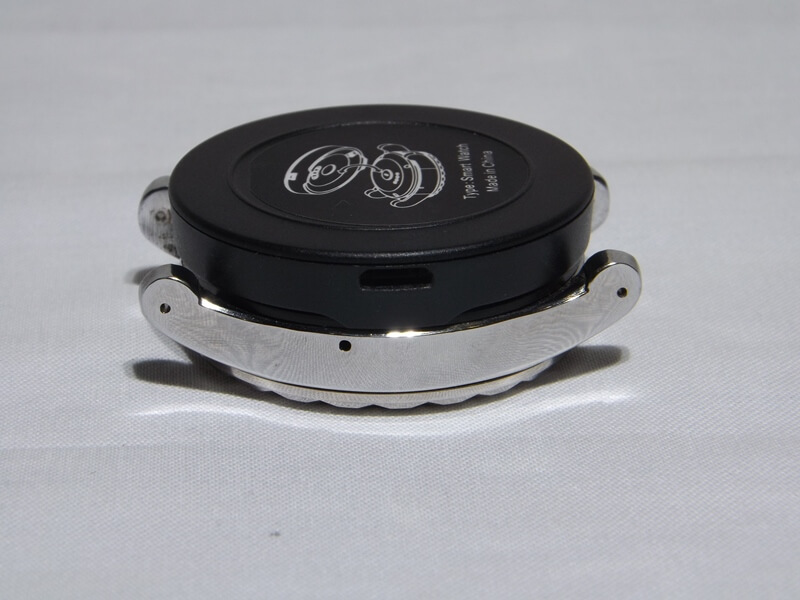 And that’s how the bottom of the watch looks like where the charging cradle (thing next to the watch) will be attached for charging purpose. One interesting thing about the cradle is that it’s attached via magnets. You can see how to charge the Sun S2 in the video below. 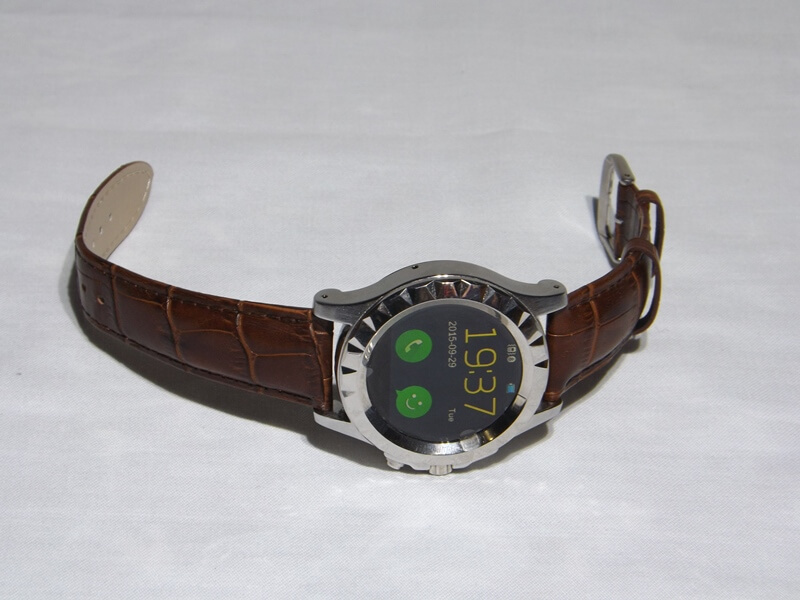 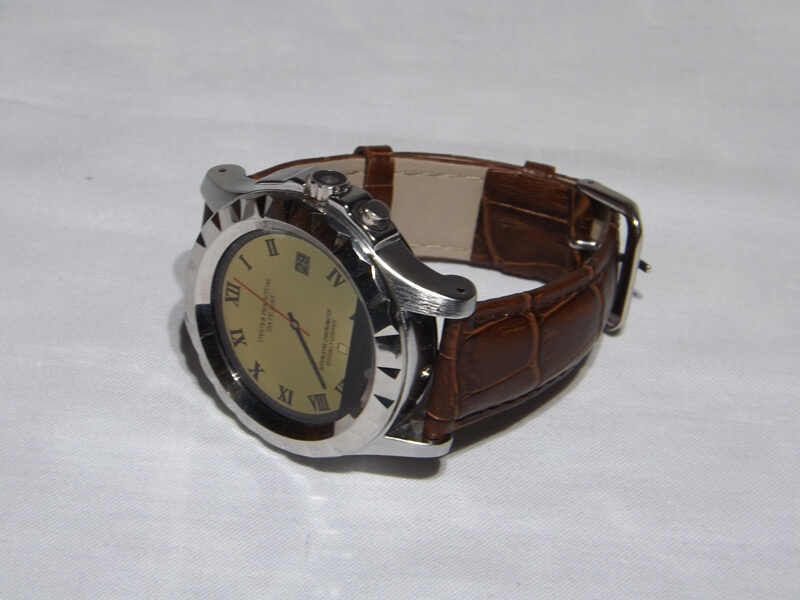 And that’s how the watch looks like with leather strap. From both the options available to me, I’ve taken a likening to the leather strap with the watch.

In the above video I take you through the features of the watch and how to charge the watch.

The Sun S2 smartwatch is using a 1.22″ HD IPS capacitive display screen but it’s not a complete round shape. The blackness you see at the bottom of the smartwatch screen isn’t because of dead pixels there, instead it’s because of the screen itself is not a complete circle. This does take away the beauty of the smartwatch at some points like looking at the time on analog watch screen where the number “6” is missing because it’s present right in the empty space. I personally would’ve really liked to see it as a complete circle.

Speaking to the responsiveness of the smartwatch, the touchscreen is really responsive and accurate. At least it’s better than the smartphone I was using it with. But then again, since it’s a round shaped screen and more over not a complete round, I had issues reaching the buttons at the far end of the screen. Specifically in typing text messages as the buttons to the the sides are almost missing and it makes it difficult to type on a round screen. And messaging is not the only place where a button is half missing because of being at side, but there are more places like that like in setting options. So No. 1 surely needs to iron out these issues with the texts being half missing from the screen both due to the screen being round shaped and buttons being too near the corner of screen. 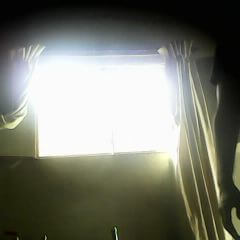 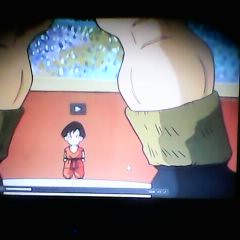 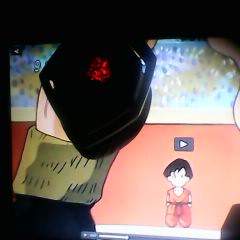 The camera quality of Sun S2 isn’t something to be praised. It has a max resolution of 240×240 and isn’t really suited for dark environment. The size itself is too small that taking picture with the Sun S2 would seem kind of useless, and I can’t see why anyone would actually take pictures with the smartwatch though the fact that it has an independent camera and can take pictures at all is something most smartwatches can’t do.

The sound quality is as comparable to average smartphones you’d see with not so loud volume. Simply put, the sound isn’t something great but isn’t bad either for a smartwatch. You can hear and understand the sound being produced from the smartwatch in quiet places you’ll need to focus on the sound in busy places to understand it.

Microphone quality of the smartwatch is average. You do get lots of environmental noise along with yours when on phone calls but the voice is understandable. Though you don’t want the watch to be too far away as your voice will get dimmer.

The Sun S2 smartwatch as mentioned in the specification is indeed a water proof watch and I’ve had so many hand washes with the watch being worn. Which also means that the watch has been in contact with soap water but it has yet to show any sign of corrosion or functionality issues. The watch is IP67 (IP6) water proof rated, this means it is splash and water jet proof but this does not mean it can be submerged in water so know that you can’t swim or take a bath and hold it under water, it does only support being worn while washing hands or being rained on…etc.

Aside from the missing texts/buttons and connectivity issue, I’m not very happy with the battery either. When the watch is ideal, it lasts about 2-3 days and that’s when the watch is not connected with a smartphone but when the watch is being actively used with a smartphone, the battery dies in about 8-9 hours. I’ve been out of house for about 10-11 hours a day for some events and having the watch die on me was sad. Well who doesn’t want to show off their fancy gadgets to their friends and strangers for bragging rights, and moreover when it’s done in James Bond style?? That was something taken away from me after 8-9 hours of use. So in short, using a better battery cell that could give of longer battery timing would have been a better idea. Not that it’s under performing here, the battery used in the Sun S2 takes only about 1:30 hours to charge completely, considering that, the battery timing is good, but more is always better, right?  I will say though that the battery life is on par with watches costing 3x as much so I am not removing any stars for the battery life, just would have liked to have at least 12+ hours of active use battery life in a smartwatch while Bluetooth paired.

Sun S2 does have a software to play around with. It’s called Mediatek SmartDevice and it available for both Android and iOS. The software is nothing fancy however and has simple to understand GUI and few options.

The tab called “My Application”, I still have yet to figure out what it does, as when I click on it, it takes me to another tab where there are 3 applications present and I’m supposed to download them. Though I wasn’t able to download 2 out of the 3 applications and the 3rd one which I did was in some foreign language so I couldn’t even understand what to do. And oh the applications don’t install on your smartwatch but on smartphone.

Then we have the most important “Notification” tab. When you enter it, there are two different columns, one for personal applications and one for system applications. From here you can enable and disable what kind of application notifications you want to see on your smartwatch and what not.

Then there are some other not so important tabs on the applications present as well. In my opinion, the devs for the application need to be more creative with the approach as it’s too simple that someone wouldn’t even bother using it once they’re done with the notification tabs. They could offer various kinds of applications for the smartwatch/smartwatch weekly as an ad or some other ways that I can’t think about. Honestly I’ve been to the applications just twice, once in the beginning and second time to take the picture for this review.

So it turns out the round screen experience wasn’t as pleasant as it could or should have been. Since it’s not using an Android OS, we are limited on the applications as well that can be used with the smartwatch, yes would’ve loved to play games or use various other applications with the smartwatch itself. The screen looks odd with the blackness at the bottom due to screen not being a complete circle. And also the missing texts/button issue near the boarder of screen was awkward and hard enough to use while typing messages on the watch. And what saddens me the most was the connectivity issue as usually I couldn’t get notifications while riding due to the watch losing connectivity with the smartphone.

The build quality and look of the watch seems good with you  having multiple color and straps/chains options. Then we have average sound and microphone quality and somewhat acceptable camera quality at 240×240 resolution.

The Sun S2 smartwatch has an MSRP of $52.89. At the current price and the features and issues we have with the Sun S2, I would like to give Sun S2 3/5 star rating. In short, if you want to experience a round dial smartwatch, then Sun S2 is a good option but if you want a more standard square screen smartwatch, then there are better options out there.

Disclaimer- No.1 Phones sent me the Sun S2 Smartwatch to do a honest review on. All opinions are mine and mine alone.