Another day, another sample in from Nusound and another review. But this time instead of Bluetooth speaker, we have a Bluetooth headphone called the Beat Master which has a fordable design. But does the headphone has the quality as the name suggests, let’s find out in the review. 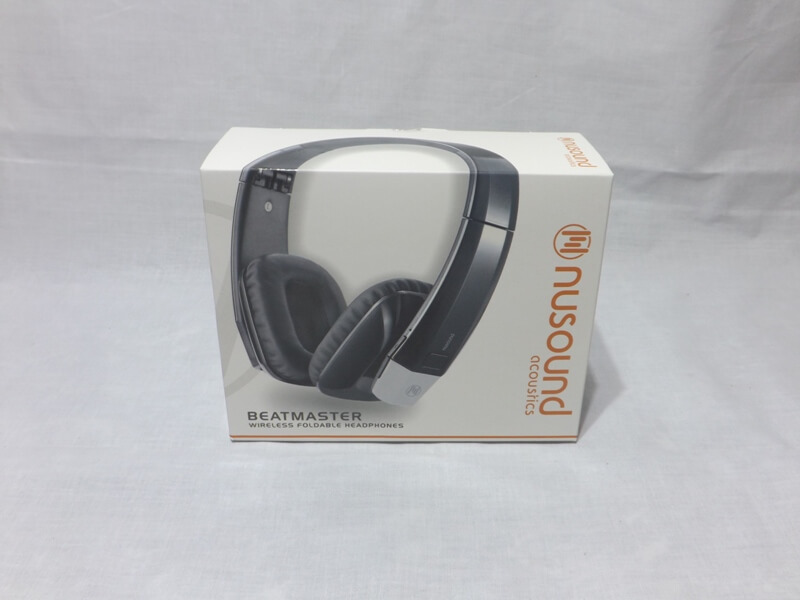 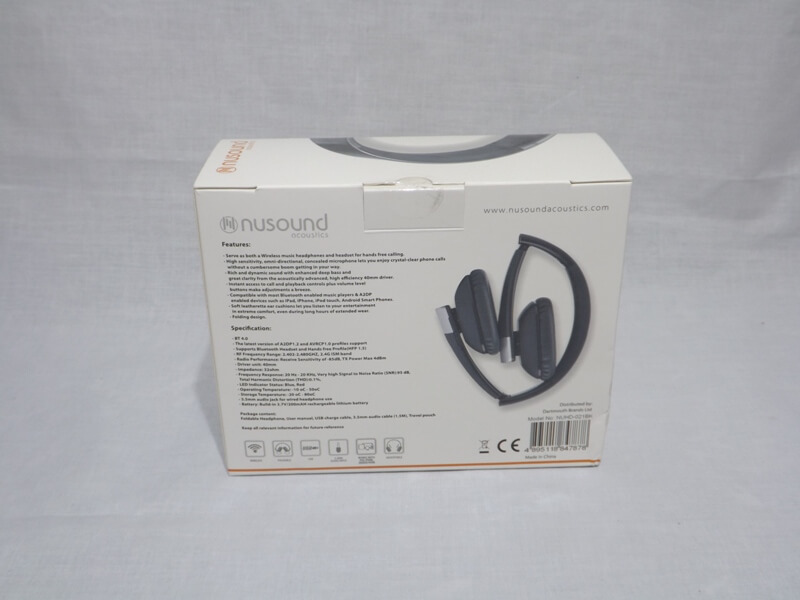 Then on the back of the box we have detailed list of specification and features of the Beat Master. Along with that we also have a picture of the headphone in it’s folded state. 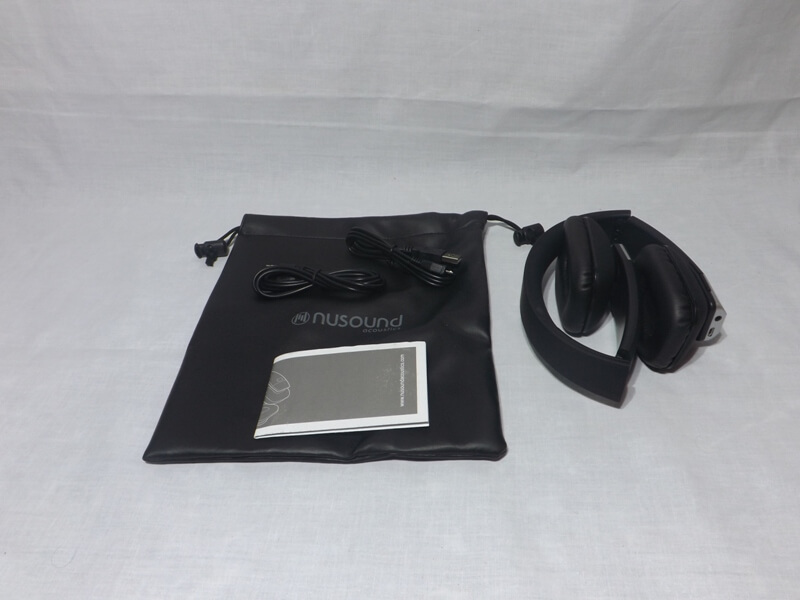 In the above picture you have the things that came along with the Beat Master headphone. We have a carrying pouch, a micro USB cable, a two-way 3.5mm audio cable and the instruction manual. The cables and the headphones were also packed in plastic that I removed before taking the picture. Also the carrying pouch as you can see is large enough that you can fit more stuff along with the headphone in it. I wouldn’t really recommended that though as you might damaged the headphone. 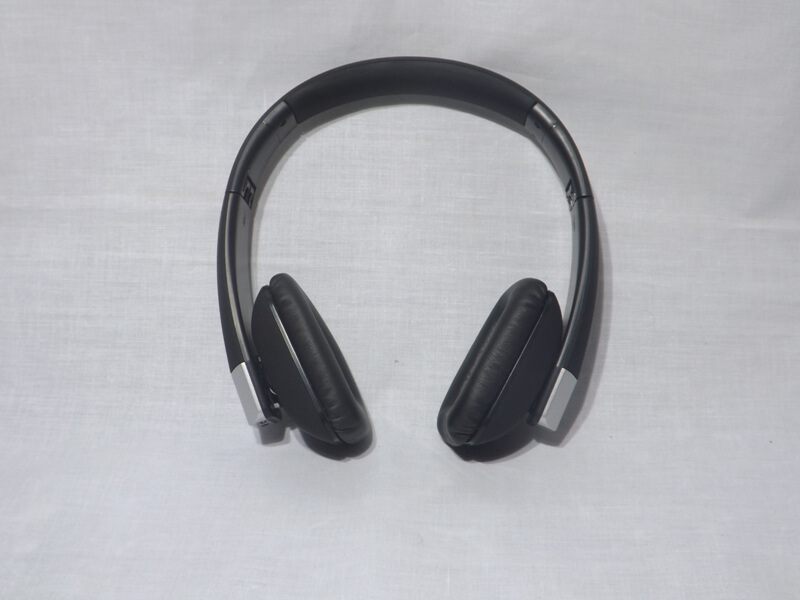 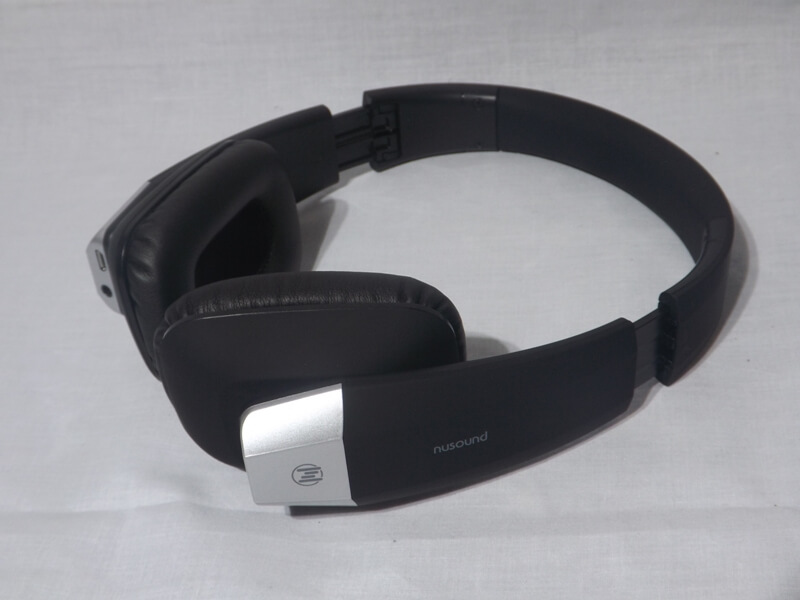 That’s how the headphone looks when the in the open state. 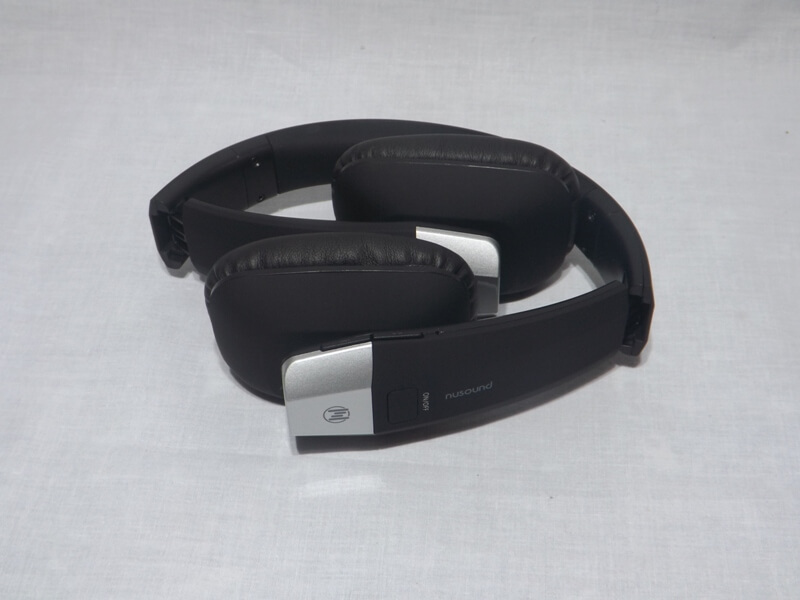 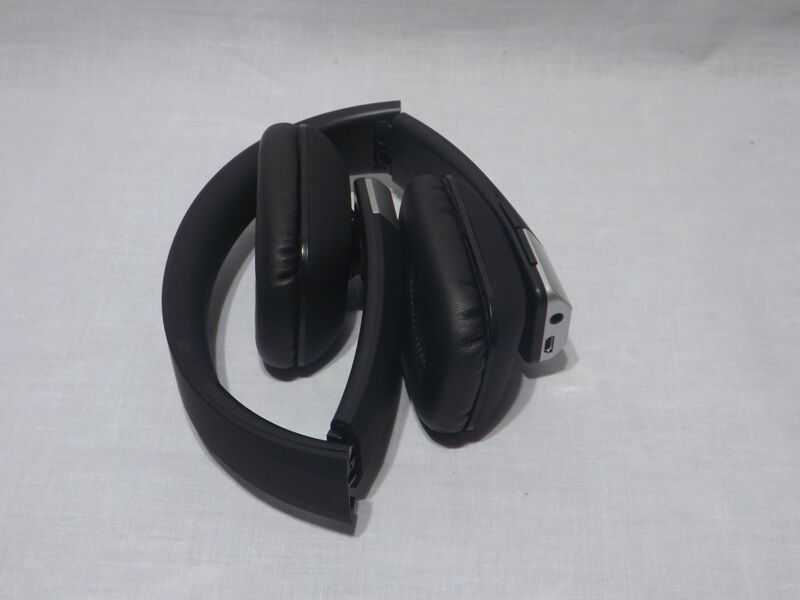 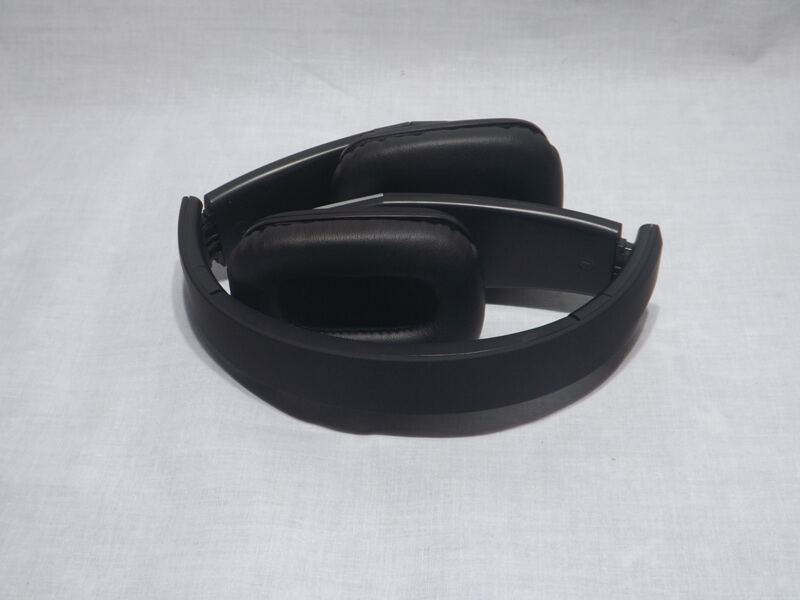 And that’s how the headphone looks in folded state. 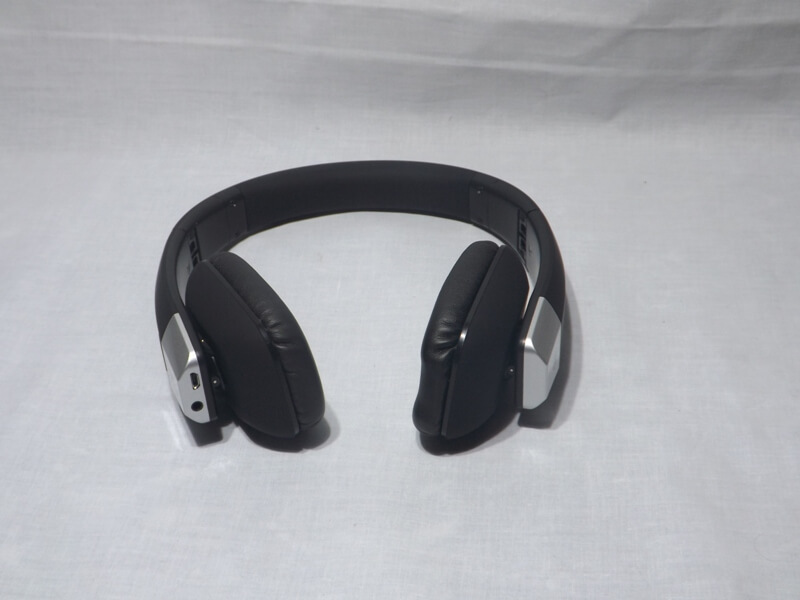 Just like any quality headphones, we have the top of the headphone filled with soft foam for better and comfortable fit/feel. 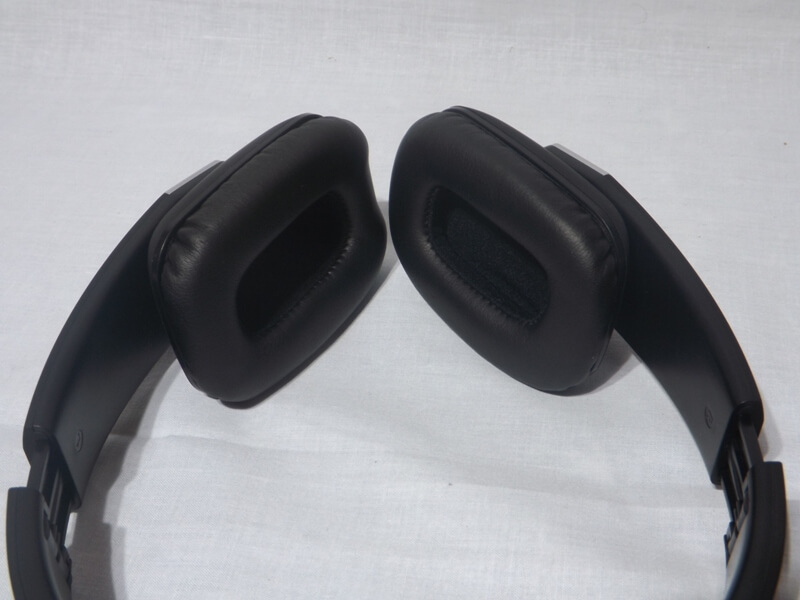 The earcups even though looks small in the picture covers the ear fully. Geometrically talking, the earcups have a depth of about 1.5cm and the gap between is about 2 inch in height and about 1 inch in width. The cups also have an adjustable design which helps them pivot a little bit towards left and right which makes them really comfortable while walking as they would adjust whenever the headphone is falling back and forth. This really is something I haven’t seen in many headphones so far or none yet i guess and it seems to be a great implementation for the comfortability of the headphone. 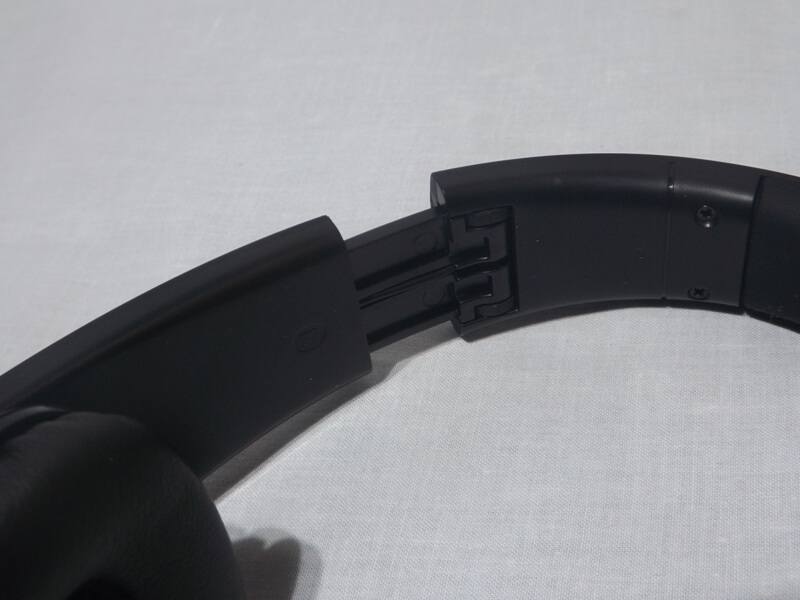 And like any other headphone, we also have extension option on the Beat Masters giving you about a little less than an inch extension. Also this is the same place from where the headphone folds. 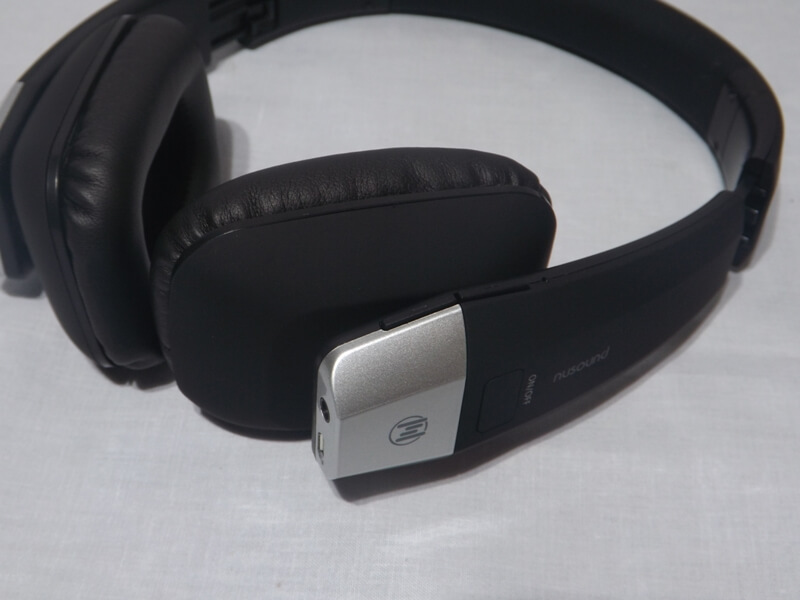 Now coming down to the interaction parts of the headphone, all the functions, charging and stuff are doing from the right part of the headphone. The large button right between the Nusound text and company’s logo is the power button used for powering on/off of course but is also used to bring the headphone in pairing mode. Then the two similar looking buttons are used for volume levels and next/previous tracks. The button on the black side is used for previous track by pressing it once and increasing the volume which is done by holding it down and the button on the silver side of the headphone is used for next track and lowering the volume in similar manner. Right above these two buttons is the LED indicator not much visible in the picture. And finally at the bottom we have the 3.5mm audio port and the micro USB port.

For connectivity purpose, we have two options available in the case of Beat Master NU-021 here. One is the Bluetooth itself and the other one is the 3.5mm audio port. To connect the headphone vie Bluetooth, just hold down the power button until the headphone flashes in red/blue color in turn. When that happens, it means that the headphone is in pairing mode. Just go to your smartphone or laptop and search for devices, you’ll see the Beat Master as “NUHD-021”, at least in my case. Just tap on the device and you’re connected. In case your connection requires a password then just use “0000” as the code and you should be fine.

Connecting the headphone vie 3.5mm  cable is even easier. Just plug in one side of the 3.5mm cable provided by Nusound into the headphone and other end of the cable into your preferred audio device (Radio, PC, bar phones etc) and you are done. It’s just like using a normal wired headphone, just in case of Beat master you had to attach the wire. Also you won’t need to power on the headphone when using with the 3.5mm cable as it would take power directly from the PC/smartphone.

The Nusound Beat Master NU-021 is using 2x 40mm drive units of 32ohm but the sound quality of the headphone was a let down this time. We are facing the issue with Beat Master that was no where to be found in the previous samples by Nusound. Let me put it simply, the volume of the headphone is great, the bass is also great, it even makes the headphone rattle at some points (yea just the kind of musical feeling I like, but not the quality you want from a headphone), but there’s certainly noticeable amount distortion in the sound.

The distortion happens at weird places, not like it happens every time on each song or movie, but at certain places. I usually listen to electro/rock kind of music at high volume, the headphone performs well on high volume, but as soon as a low noise, usually acoustic parts in the song comes without the loud instrumentals when my headphone is on high volume, you’ll be hearing noticeable distortion in the noise.  That’s not the only place I’m facing sound distortion, but it also happens at low volume at some places. I started noticing this as I started increasing the volume of the headphone time to time, and after a while I was able to notice the distortion in the sound.

If not for the sound quality of the drive units, the bass quality is exceptionally great for the headphones. But the bass is just too powerful for the little plastic headphone that it even makes the headphone rattle at high bass. That’s not the quality you’d want from a high quality headphone but you can counter that by lowering the volume level.

Microphone quality of the Beat Master is better in terms of environmental noises then the speakers we reviewed from Nusound. That could be either because the mic is more closer to the source of sound or Nusound used better quality microphone with the Beat Master.

The hands free option of the headphone was a really good and fun experience, let me split that in two part. So the good part was that to receive the call when the headphone was paired with the smartphone I just needed to press the power on button once and to hang up, do the same after the conversation. To ignore/refuse the call I just needed to press and hold the power button for 2-3 seconds. But the funny part was whenever I was talking to friends on the headphone, the next person (usually my family members) to me would always stare at me as to them it seemed like I started talking myself. Well who could blame them for that as it indeed looked weird talking on a headphone without a boom mic :D

Battery timing as any of the other samples we reviewed from Nusound is great. The Nusound NU-021 makes use of a 200mAh lithium battery which takes only about 2 hours from 0-100% for charging and gives off about 8-9 hours of playable which should be enough for a a day trip to somewhere.

This time I can say I’m somewhat disappointed with the Nusound Beat Master NU-021. But not with the product as whole, I actually very much like the comfortability of the product, but it’s the drive themselves. I haven’t really seen any headphone with the adjustable earcups and that implementation in the Beat Master was a great choice and made it really comfortable for long sessions. As mentioned above earcups even though looks small in the picture, but are actually sufficient enough to cover your ear completely, which results in a little bit sweating around that area, hence you’ll have to clean and wear them again after few hours. The headphone is also very light and the cushion at the top doesn’t even feel like I’m wearing something around my head.

Considering the connectivity options, we have both Bluetooth for wireless connectivity and 3.5mm audio port for wired connections so Nusound has got you covered regardless of in what situation you are. The battery timing of the headphone is really great. Even though in the instruction manual of the headphone we see Nusound saying it needs up to 2-3 hours of charging for 5-6 hours of playback, in my case, the headphone only needed 2 hours of charging and gave off around 8-9 hours of playback. so maybe 5.5/5 score here for Beat Master.

But, when it comes to the drives and the sound it produces, I’m disappointed. No doubt if the sound was perfect and considering the comfort and battery timing and connectivity options of the Beat master, it could have been a 5 or at least 4.5 start product but since sound is one of the major aspect of the headphone, well we buy them for sound quality of course, hence I could only give the Nusound beat Master a 3.5/5 star rating for the price it’s being sold. The Nusound Beat Master has an MSRP of £59.99 which might be considerable for high quality Bluetooth headphones but certainly not for the sound quality I got from the Beat Master and certainly not when Nusound themselves have other cheaper options available.

Disclaimer- Nusound sent me the Beat Master Bluetooth Headphone to do a honest review on. All opinions are mine and mine alone.