Nusound Acoustics is a company based in London that aims to provide high quality headphones and speakers at an affordable price. Today we review one of their portable Bluetooth speakers known as the Cube NU-016 to test how much truth is in that claim.

“Audio Cube packs massive punch from such a small speaker. Soft touch material make this a world class product and if you don’t like it, the motorized opening will wow your friends at the very least. Press and pair via NFC or Bluetooth.” 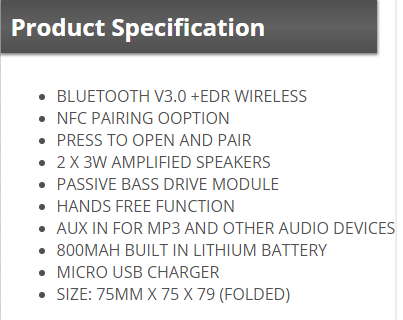 Cube NU-016 makes use of 2x 3w amplified speaker and a passive bass drive module. It has Bluetooth and NFC as pairing options with Smartphones and AUX support for other types of audio devices. Also the most unique thing is the design of the speaker itself. It has a motorized opening. Once you press the top of the speaker, it opens unveiling the drives and buttons. The speaker has a 800mAh lithium chargeable battery which supports charging by a micro USB cable. 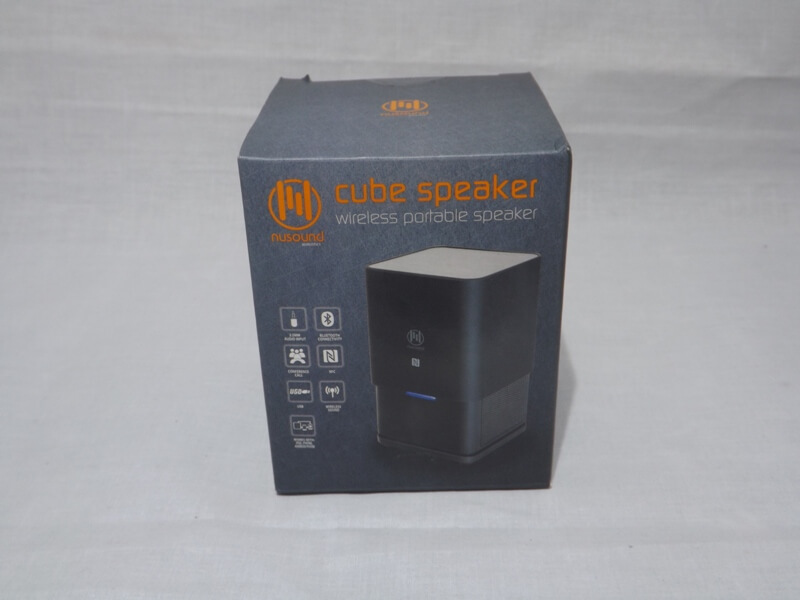 So just like the speaker itself we get the NU-016 in a cubic cardboard box. On the front we have a picture of the speaker itself when it’s functional. Beside the picture we have some features mentioned and on top we have the company logo in orange color and the product’s name. 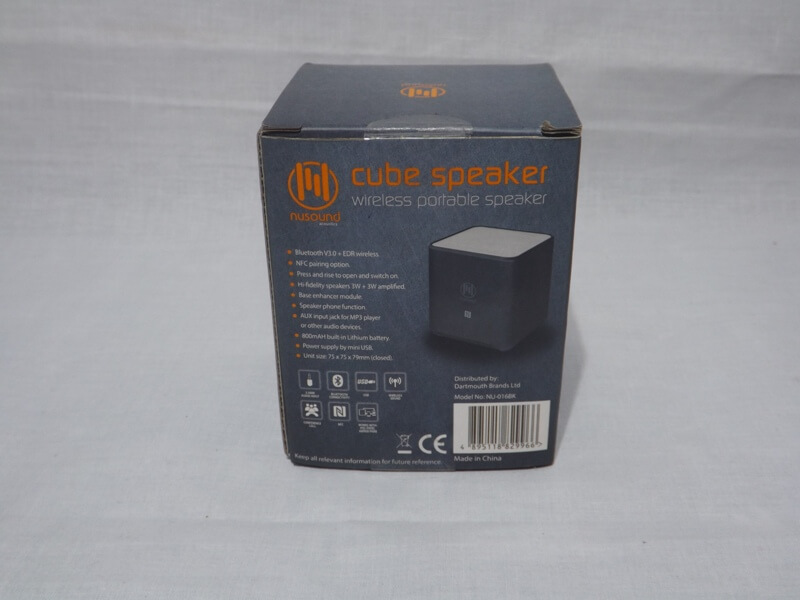 On the back side we have a similar condition though this time the speaker is off in the picture and we also have the full specification of the speaker. The box was sealed with plastic sticker from top and bottom. 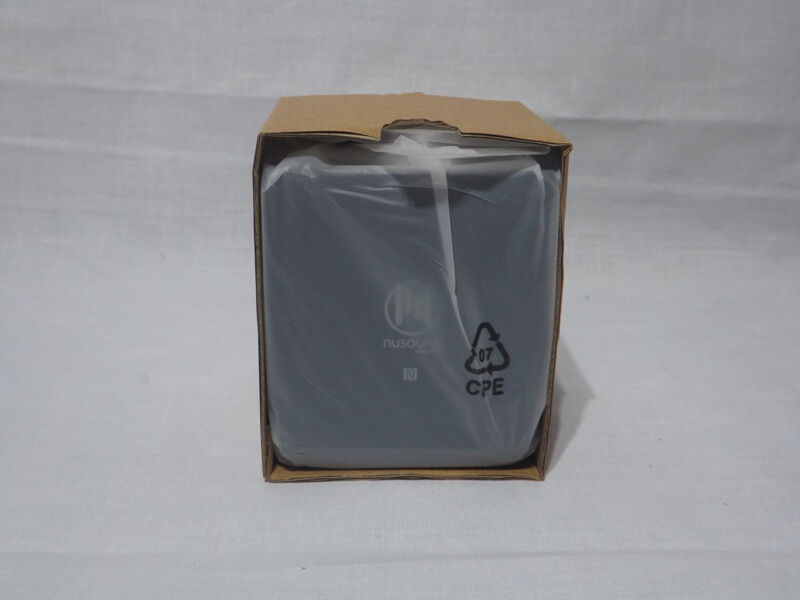 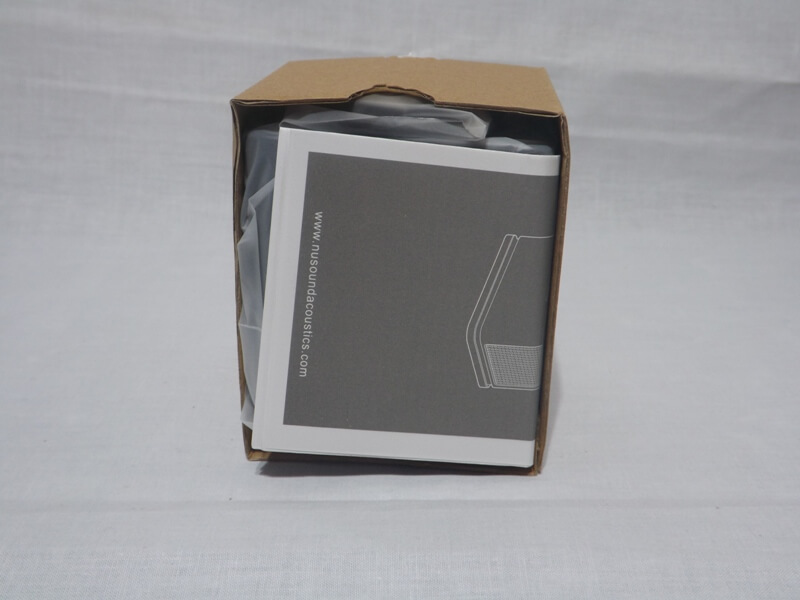 This is something you’ll be pulling outside of the box. We can see that the speaker is wrapped in plastic which is covered by cardboard. There’s also another little plastic container right above the speaker that isn’t clearly visible in these picture that contained the cables. 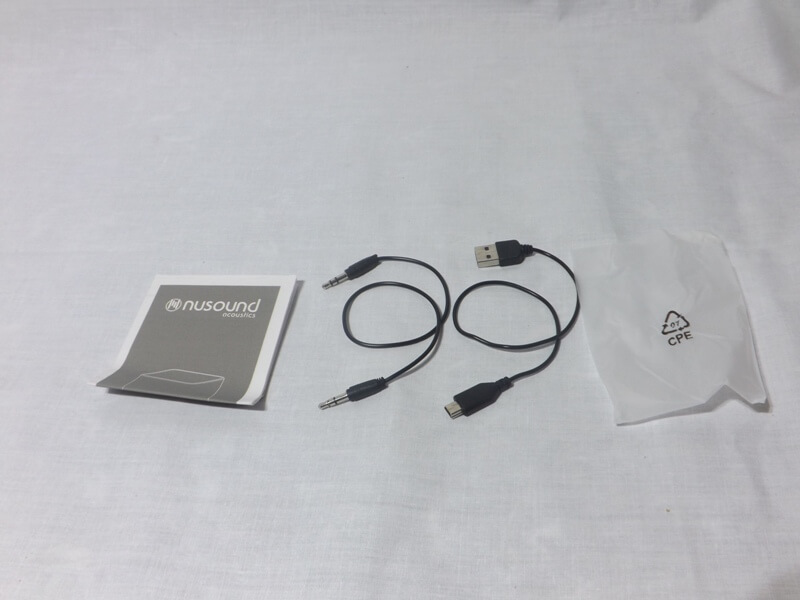 So along with the speaker we get 2x cables and a instruction manual. One of those cables is the 3.5mm AUX cable for audio devices other than those which doesn’t support NFC or Bluetooth and the other one is the charging cable. 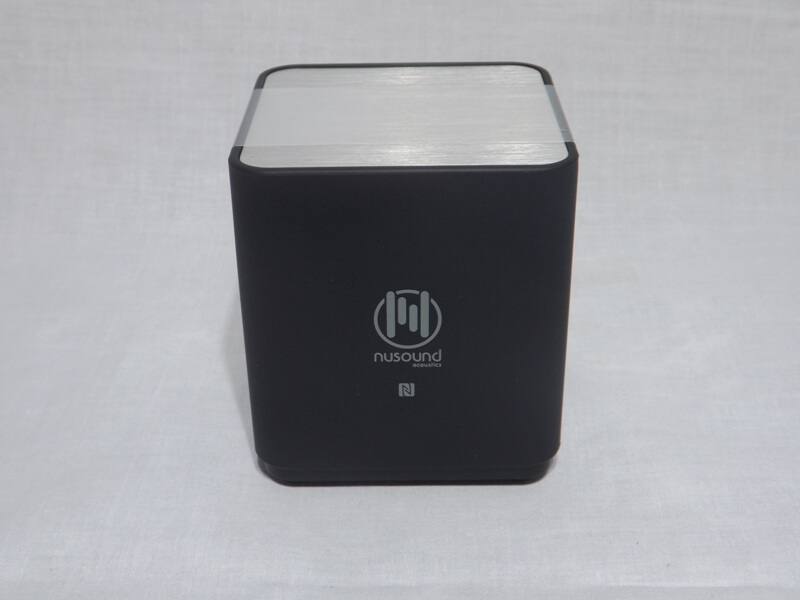 So this is how the actual deal looks like with the company logo. The speaker is facing front in this image and is off right now. If you notice on top having a metallic/silver-ish finish (not sure if it is indeed metal), there’s a plastic strap that’s holding back the speaker from opening. As soon as you remove the plastic strap the speaker will open up. 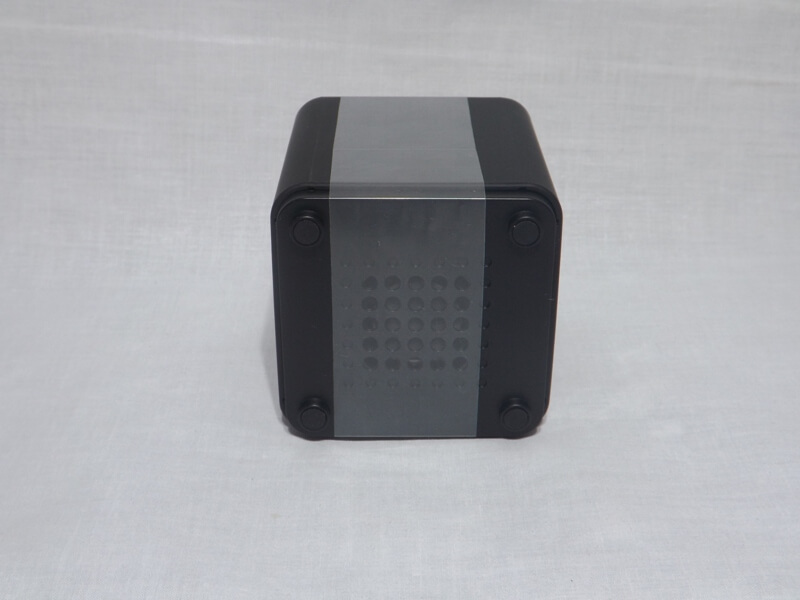 There’s not much to speak about the speaker when it’s in closed state, the only other worth mentioning thing is that we have the bass drive at the bottom of the speaker and 4x rubber feet to keep it from slipping. 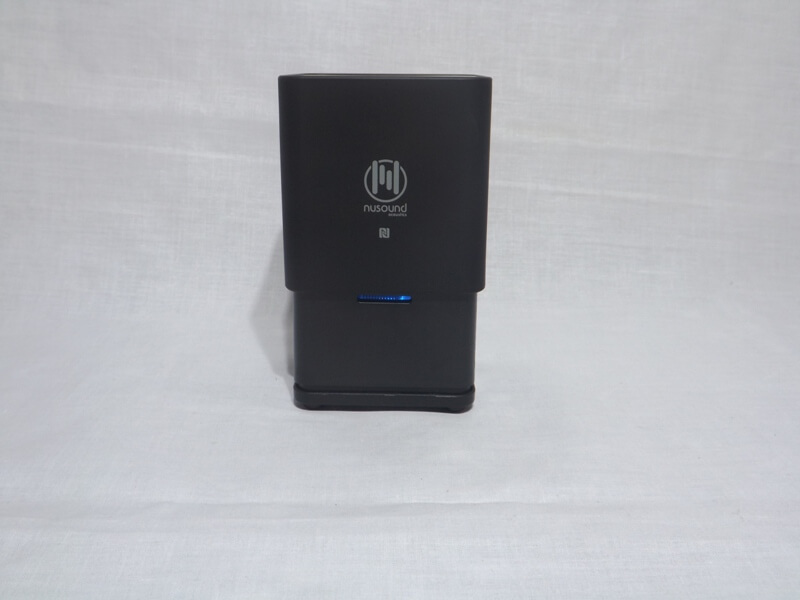 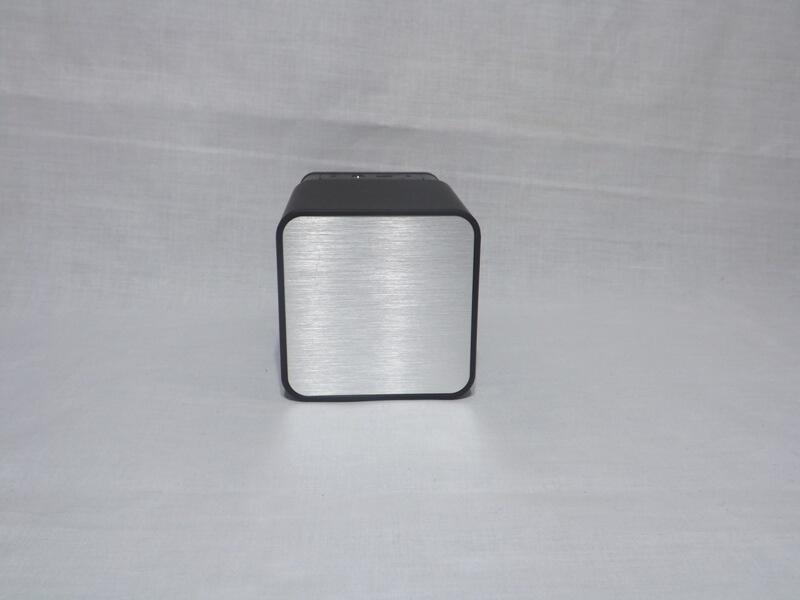 A better look at the top of the speaker with the metallic finish. 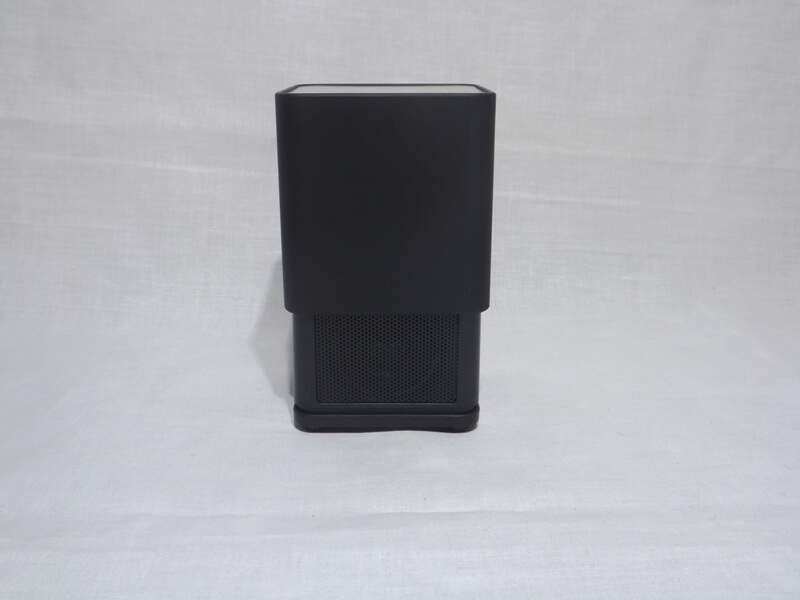 On both the left and right side of the NU-016 we have the drives concealed behind a grill-ish wall. The drives are visible through the holes and only unveils when in open state. 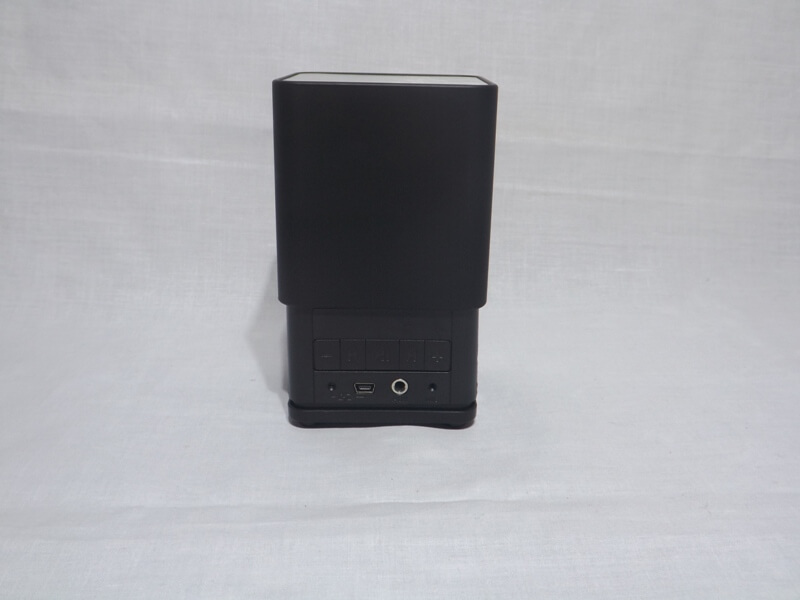 And finally on the back of the speaker we have the buttons and ports for interacting with the speaker. Position-wise the buttons are above and the ports are below. From left to right order, we first have the decrease volume button then previous track, then pause/play, then next track and finally volume increase button. Coming down to ports, we have the USB charging port just beside the AUX port, though the USB port isn’t the standard size, so you’ll need to carry the charging cable provided by the company every time you’re taking the speakers outside. There are also 2x small holes besides those ports. They aren’t just for nothing, the small hole on left side is actually and LED that indicates the state of charging. It keeps blinking while the speaker is being charged and stops when it’s completely charged. And the small hole on left is the microphone. Yes u can use it as a hands free.

Connecting your Smartphone or PC to NU-016 is really easy. There are 3 ways you can pair up stuff with the NU-016. 1st being the Bluetooth, 2nd being the NFC and 3rd being the AUX cable. To pair up the speaker via Bluetooth, you just need to open the speaker, enable the Bluetooth function on your smartphone and search for devices and a device named “NUSOUND(NU-016)” will pop up. Just tap on it and you’re connected.

But in order to use the BT functionality, you’ll need a BT 3.0 smartphone, but I managed to pair it up via Bluetooth to a bar phone which I don’t even know what BT version that has, defiantly not BT 3.0 though. But there’s a catch, with the bar phone, I couldn’t take the phone much farther than 1 room and the sound would start distorting. So for the best result Nusound suggests BT 3.0 Smartphone and I was able to take the phone as far as 3 room if I’m right and no distortion or delay was noticed.

Connecting with AUX cable is pretty easy, you just insert one side of the cable into the speaker and other side of the cable into the input device like PC, Ipod etc. Unfortunately I couldn’t test the NFC connectivity with the NU-016 as I’m not sure if the NFC on my device works or not or it was the speaker that wasn’t connecting to it. I couldn’t verify both as I didn’t had any other NFC compatible device.

Simply put I’ve really like the sound quality of NU-016. It’s loud enough to reach the room next door and clear enough to be understandable from there. I’ve used this speaker for around 1 month now and haven’t noticed any kind of distortion. Just for a little compression, the loudness is on level or better than the 2.1 channel I reviewed way before. There’s no noticeable flatness in the sound so you’ll be enjoying your favorite music in the tune you’ve always heard them in.

When it comes to bass, the bass waves are not that noticeable from afar but you can clearly feel them if you and the speaker are on the same surface. Most of the times I had the speaker just laying beside me and I could clearly feel the bass from it. And yes it does make the music feel more energetic and enjoyable.

Yes, the NU-016 does have a mic and support for hands free calling. To use the Hand free functions, whenever you are recieving a call from someone, just press the pause/play button on the speaker and you’re on hand free mode, but you can also divert the call to your smartphone by holding the pause/play button for 2 seconds. Though as you can probably guess, since it’s not a boom or directional mic, you’ll be hearing environmental noises on the other side of the call as well. Even though there’s environmental noises being recorded by the microphone, the voice is fairly clear and understandable on the other side of call and also it has a good enough voice recording range so you don’t need to hold the speaker to talk with people. And let’s be honest, who would want to look weird holding a speaker and talking to it?? :D

Battery timing of the NU-016 which uses a 800mAh lithium battery is really great as well. It takes about 2:30 hours to charge the speaker from 0-100% and gives you about 9-10 hours off playback on-off. I haven’t had a chance of running the speaker straight out to see how much battery time it would give, but if I’m not mistaken the battery timing should be lower, but not by a large margin.

No doubt the Nusound Acoustic Cube NU-016 is a great product. Not only the unique motorized opening of the speaker looks awesome but the sound quality is great as well. Since childhood I have had bad luck with things that have motor in them (RC cars :D) but I hope the motorized opening on the NU-016 won’t die too easily. The motorized opening is not the only thing that makes the NU-016 looks so great but the 2x drives covered by grilled walls and the LED on the front and the logo on the top giving a neat look of front overall makes the product looks great. 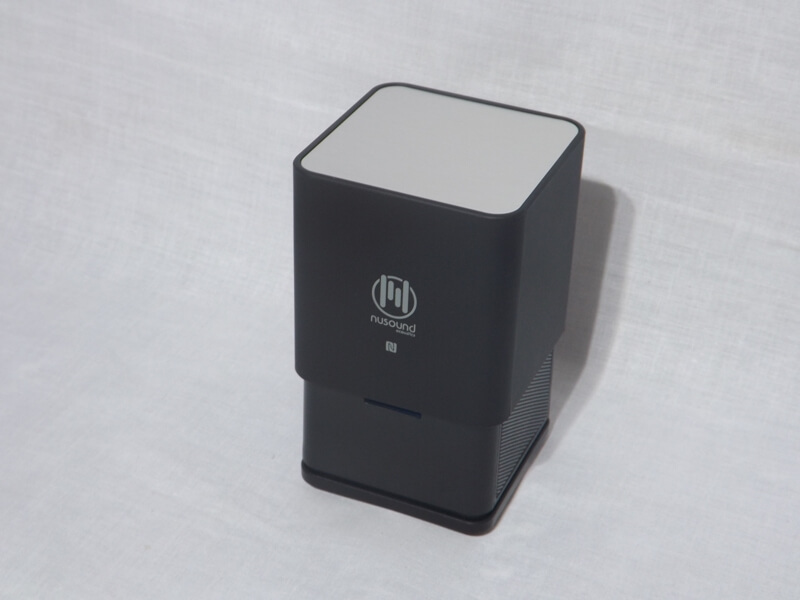 As mentioned above the sound quality of the speaker is great, I love hearing songs primarily on this speaker right now with another sample from the Nusound being second and other one from Nusound again being 3rd which we will be reviewing shortly as well ;) Coming back to NU-016, the bass quality as mentioned above is good enough for a little cube sized speaker as well and produce fairly noticeable bass for the size of it. The microphone is nothing out of ordinary considering it’s not a boom or directional mic so you’re getting the quality you’ll be expecting from any other BT speaker with microphone.

So in the starting of the review, we mentioned that Nusound Acoustic aims to provide the globe with high quality headphone and speakers at an affordable price. The Cube NU-016 has an MSRP of $76.28. At this price point for the quality and functionality we are getting, I can say that the claim they make is indeed true, though the price could be lower, but once again, this is not a budget level speaker with average quality.

So concluding the review, I very much liked the design and uniqueness of the speaker and the great sound and bass quality it provides with 3 possible connectivity options. Though there are certain things I didn’t like and 1 thing that I wanted to see that would make the NU-016 a 5/5 star product. The fact that the speaker isn’t using the standard micro USB charging port, it can become a insta no-go for some and might have been for me as well if I were to purchase it. I already have many micro USB cables and having another one with different size and finding it amidst all the other cables would become troublesome sometimes. If Nusound Acoustic were to go with the standard size, they would’ve saved me and other buyers from this trouble. Also when you reach the max level of volume on speaker itself and press the increase volume button once again, it will bring the down the song/movie volume to 0 and play a tune indicating the volume has reached max level and resume the sound of song/movie. Nusound could’ve used a better way to get around this issue like playing the tune over the song or dropping the volume of song and playing the tune etc. Also for a portable BT speaker the price point seems just a little high at $76, not that it’s not justified for the quality it provides. But if they were to drop a few $$ from the MSRP it would have made the NU-016 a perfect 5/5 start product. As of now I would like to rate the Nusound Acoustic Cube NU-016 4.5/5 stars.

Disclaimer: Nusound Acoustic provided us with the Cube NU-016 so we could do a showcase and share thoughts on the product. All opinions are 100% mine and mine alone.