The Hunger Games movie, if you did not know it, is based on a book of the same name by Suzanne Collins.  The movie is the first of series released in theaters and on DVD and Blu-ray August 18.  When released in theaters, The Hunger Games set opening day and opening weekend records for a movie that was a non-sequel.  In fact, the film is listed as having the third-largest opening weekend in the US.  Definitely an accomplishment for a new movie, especially one based of a young adult novel. 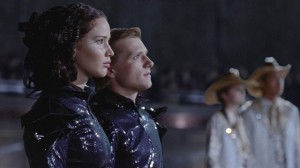 The premise of the story is an unidentified future time period after the destruction of what we now consider North America.  The government is a totalitarian, called the Capitol, and the nation is just known as Panem.  There are twelve districts to Panem and each have their own specialty.  For example where Katniss Everdeen, our protagonist, lives the main job is mining.  Many, many, many years ago there was a thirteenth district but they had an uprising and were destroyed.  To keep the other districts in-line and to make sure no one forgets, the Hunger Games were created.  Children from twelve to eighteen have their names put in as tributes to represent their district.  There are twenty-four tributes; one boy and girl from each district; in these brutal, fight-to-the-death games where only one can survive.  The one who does brings glory to themselves and extra food to their district for an entire year.  They are also exempt from having their name in the lottery as a possible tribute.  The districts are forced to watch and those in the Capitol bet on the outcome.

In the first novel, Katniss volunteers for her sister and Peeta Mellark is chosen.  As Katniss has broken the law with a friend of hers, Galen, by hunting outside the fence of their district, she feels she might be able to win, or at least this will keep her sister from definitely dying since Katniss takes her sister’s place when called.  Unfortunately things develop which Katniss never expected and, without giving too much away if you haven’t seen the movie or read the book, the Capitol is not happy with the outcome.

The brutality of the book was toned down quite a bit to get a PG-13 rating but it’s still shocking.  The movie held some touching moments as well and leaves the watcher wondering what will happen in the next one.  Even though the books are a trilogy, it has been confirmed there will be four movies.  Whether the second novel is based off the second book, Catching Fire, and the third, Mockingjay, split into two or the last two split somewhere to make the three films, has not been stated.

No matter how Hollywood handles it, this is bound to be one of the most watched series in a while.  The fact that it’s releasing on an odd day should say something about the popularity of the movie.  Adult or young adult, you should not miss this one if you didn’t see it in theaters.