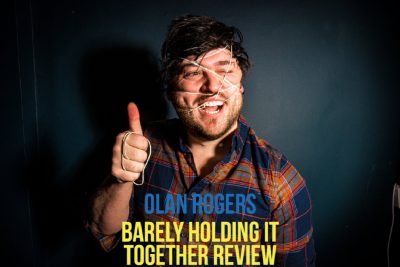 I had the pleasure of once again heading back to Helium Comedy Club in Downtown Indianapolis to cover yet another comedy show and this time someone whose career I have had the pleasure of following for well over a decade and that person being Olan Rogers as he made his stop in Indy as part of his “Barely Holding it Together” Tour. For those that might not know who Olan Rogers is, let’s take a trip back about 15 years ago on YouTube, where Olan’s very humble beginnings started in the form of a comedy trio called “balloonshop” that Olan started with his two friends in his hometown of Nashville, Tennessee. While Olan did have some success with these series of skits and bits, it wasn’t until Olan decided to make his own YouTube channel a year after starting balloonshop and telling personal stories of his own life in the form of very comedic videos.

Olan’s success in his storytelling saw a peak upon the release of his famous “Ghost in the Stalls” video in 2012 which currently has over 12 million views, Olan has had some insanely great success ever since and even reaching the starts quite literally by leaving his hometown in Nashville for Los Angeles and having his own animated show Final Space be picked up by TBS where he served as the Executive Producer along with Creator of the show. Final Space lasted for three seasons and it was then that Olan had to decide what to do next in his career. Olan announced a tour last year in 2020 called “Wonder Years” but due to the pandemic he had to, unfortunately, cancel this tour, but Olan being determined as ever announced yet another tour which he called “Barely Holding it Together” and wanted to make certain to see his fans yet once again in person. 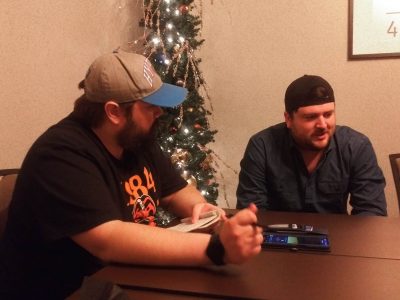 I had the pleasure of talking with Olan before his show this past Wednesday where Olan stated that this was his first tour in a couple of years stating he gets “instant gratification when you get to tell these stories live” and that his shows have been “stacked together, fly do a show fly do a show especially when I am not used to it” I asked Olan what it was like to get back on stage after having not been face to face with his fans especially after the pandemic in which Olan responded “the first laugh is what washes away all the nerves and I fall into a groove and it feels nice” not to mention he had family in his audience to see him on tour back in St. Louis.  I also asked him what it was like in regards to the pandemic and any challenges he had to face stating “We had to make the entire season (Final Space Season 3) at home” I also asked Olan about the unfortunate loss of The Soda Parlor due to the tornados back in 2020 and Olan said, “I didn’t find out until we noticed the cameras went out, it (the tornado) jumped over the Cumberland River and hit The Soda Parlor” along with saying there are plans in place to do a mobile version of The Soda Parlor at some point.

After speaking with Olan it was time to finally head downtown to the Helium Comedy Club to see Olan’s show. The turnout was massive with the show being sold out and I was very pleased to see such a great turnout for Olan. There wasn’t any opening act as Olan was the entire show which I really enjoyed. One of my favorite parts of his show is the amount of audience participation which I haven’t ever really seen or experienced in any comedy show. Olan went and talked about all the things that peeves him in which he turned to the audience to ask different members what also peeved them as well. Later in the show, Olan asked the crowd about one huge thing they wanted for Christmas with one person stating they wanted a pony, and Olan, being as witty as ever, was able to turn their answer into a very comical description of exactly why that person wanted a pony. Olan told a few Christmas stories and then ended the night by telling his famous “Ghost in the Stalls” story in person which was an absolute treat and a great way to end the show.

Olan’s show was one that I very much enjoyed and I hope to catch future shows as Olan stated that he will be back on the road again in 2022 and although I am not sure where he plans on touring next year I will say that if he stops by a location near you, you definitely should go and check out his show especially if you are a fan of his work and even if you’ve never heard of him before I promise he will bring a smile to your face and hoping to hear more.

Thanks to Helium Comedy Club for having Brian Daniels out for this show.