As a person who loves horror videogames and goes to great lengths to find a decent one amid the sea of mediocre titles,  I was thrilled to give Amy a try. I knew how these experiments usually end up, but I have to admit that Amy did scary me for all the wrong reasons. The premise is interesting and that’s what will keep many players going when things turn sour, but the story is poorly developed and it is hammered by a terrible gameplay. 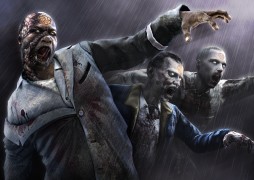 There are two main characters in this narrative, with Lana and Amy being confronted with a string of terrifying events that they can’t explain. The problem is that the developers don’t seem to care whether the player can explain anything either and as you sink deeper into a story that makes no sense, enthusiasm dwindles. It is just as difficult to care for the characters either, because although they spend a lot of time together and depend on each other to survive, there doesn’t seem to be any connection between them.

Lana is the one in charge with killing monsters, while Amy uses her powers to heal Lana by holding her hand, or to infiltrate rooms to retrieve keys. Sadly, nothing is convincing about this duo, starting with the uninspired dialogues and concluding with actions that make no sense. Amy’s role is reduced to a healing battery, because her special skill of crawling through tunnels that are wide enough to fit Lana, is more of a gimmick.

Horror has a face…

Amy the videogame looks much better than it sounds, but this is only because the voice acting is terrible and the lines of dialogues atrocious. Rooms look very much alike and the monsters are some of the worst zombies ever to feature a videogame. Killing them with crowbars over an over again to survive and to collect their DNA isn’t making the gameplay more exciting, especially when each swing is a hit or miss.

I don’t mind encountering puzzles every now and then, although I have to admit that they don’t really fit nicely in a horror videogame, but in Amy there are plenty of them and they are mostly a nuisance. It is obvious that Amy could have been a much better game, but those who play it long enough will eventually wonder if it could get any worse. Fishing for good horror titles is a gamble, but I have to admit that this is one of the least inspired decisions and an awful way to start the year.

Amy doesn’t deserve more than 2 stars out of 5, but those who want to give it a try nonetheless, should check out this trailer: